When and how were trop melodies first written down?

We know that the trop (cantillation) marks were added to our written Tanakh text by the ba'alei hamesorim (Masorites) around the 8-10th century CE. They were recording an oral tradition that, I assume, was passed from generation to generation from Sinai.

My question is about the musical rendering -- when, and how, did the particular melody for each trop symbol/family start getting recorded in a durable form? I've studied folk music; I know that minor variations in oral musical transmission are hard to avoid despite people's best efforts. (A memorized text has some more opportunities for reinforcement.) "When" will vary by community, of course -- there are at least a couple dozen different localized sets of trop melodies. I'm interested in a general answer and information on the musical history of any specific trop systems.

Musical notation (at least in Europe) goes back to at least the 6th century CE, though its form and versatility have varied over time. There might have also been some other system of writing it down that wasn't formal music notation; I remember, when I was learning my haftarah portion, writing dots above some of the phrases to show melodic shape (up/down, long/short) even though it wasn't a full musical notation. (It was a study aid.)

There is no one answer for this question. Because there seems to have been three distinct developments for the Cantillation: Ashkenazi, Old Mizrahi, and Modern Sepharadi.

The Ashkenazim are noted as being the first to develop musical motifs for all of the cantillation symbols. This makes the most sense since Europe was very focused on writing down music, and for adapting the music system based on the Greek tone system. So for the Ashkenazi communities of yore and today, they are more used to thinking of the te'amei miqra as a musical system, rather than a grammatical system that occasionally uses musical motifs to aid in grammatical emphasis. They were notating their system before the 15th century. In the 1500s we have Sephardic scholars mentioning that the Ashkenazim have already written down and put their cantillation to music. For written Ashkenazi sources, much has been discussed and brought down. Here is a snippet of information along with the source to find out more:

The most valuable of them all, for the Ashkenazic traditions, is to be found in Cantor Abraham Baer's "Ba'al Tefillah," 1877, pp. 30-42. The value of the earlier tables (e.g., those of Bartolocci, A. Kircher, P. Guarin, etc.) is detracted from by unnecessary elaboration, and especially by experiments in transcribing the notes backward, so as to go with the Hebrew from right to left, which have misled later students. Such, too, is the case with the transcription made by the monk Böschenstein for Reuchlin, and printed in his "De Accentibus" (Hagenau, 1518), at end of Book III., where the cantillation, reversed and given in the tenor as a canto fermo, is ludicrously accompanied by three other harmony parts. But Reuchlin's tenor cantillation, when retranscribed, is particularly valuable as showing that the tradition has not appreciably varied in four centuries, save possibly in the rarer jubilations, such as "Ḳarne Farah," where license is always taken.

Old Mizrahi communities, whether Yemenite, Iraqi, Egyptian, etc, had very few melodies for select symbols. Even into the modern times the Yemenites only have 8 musical motifs, with the Karaites having a similar system. The Karaites are considered a reliable source since it's also likely that Ben Asher (author of the masoretic text) was a Karaite and just as we can rely on his text, we can also rely on their musical system.

Sephardic and Mizrahi authors going back to the 1300s into the 1500s write that their cantillation system has very few musical motifs, with most of them sharing the same motif, or not having any musical value at all. They also note this is in stark contrast with the Ashkenazim who have music for all the symbols and have already written them down:

By 1798 we start seeing shifts in the Mizrahi/Sephardi communities. In 1798 the French Musicologist Guillaume André Villoteau noted the Egyptian musical cantillation system. His notation shows musical motifs for 19 of the cantillation marks, but still lacks musical motifs for all the symbols. More than likely the expanding of music to cover most of the symbols was due to the mixing of various Jewish communities and their musical systems. Which brings us to Modern Sephardic.

The Modern Sephardic melodies are all very similar, culminating into something called the "Sephardi Yerushalmi" tradition. Even if you were to listen to the "Egyptian" or "Syrian" systems, you will see bits and pieces of it in the Yerushalmi and vice versa. Now nearly if not all of the cantillation symbols for the Sephardim have musical motifs, matching the Ashkenazi system in that now it's more of a musical system than a grammatical system. i have acquired sheet music from the Egyptian Alexandrian community before the 1950s expulsion that shows musical motifs for nearly all the symbols, but still lacks a tune for Qarneh Farah. 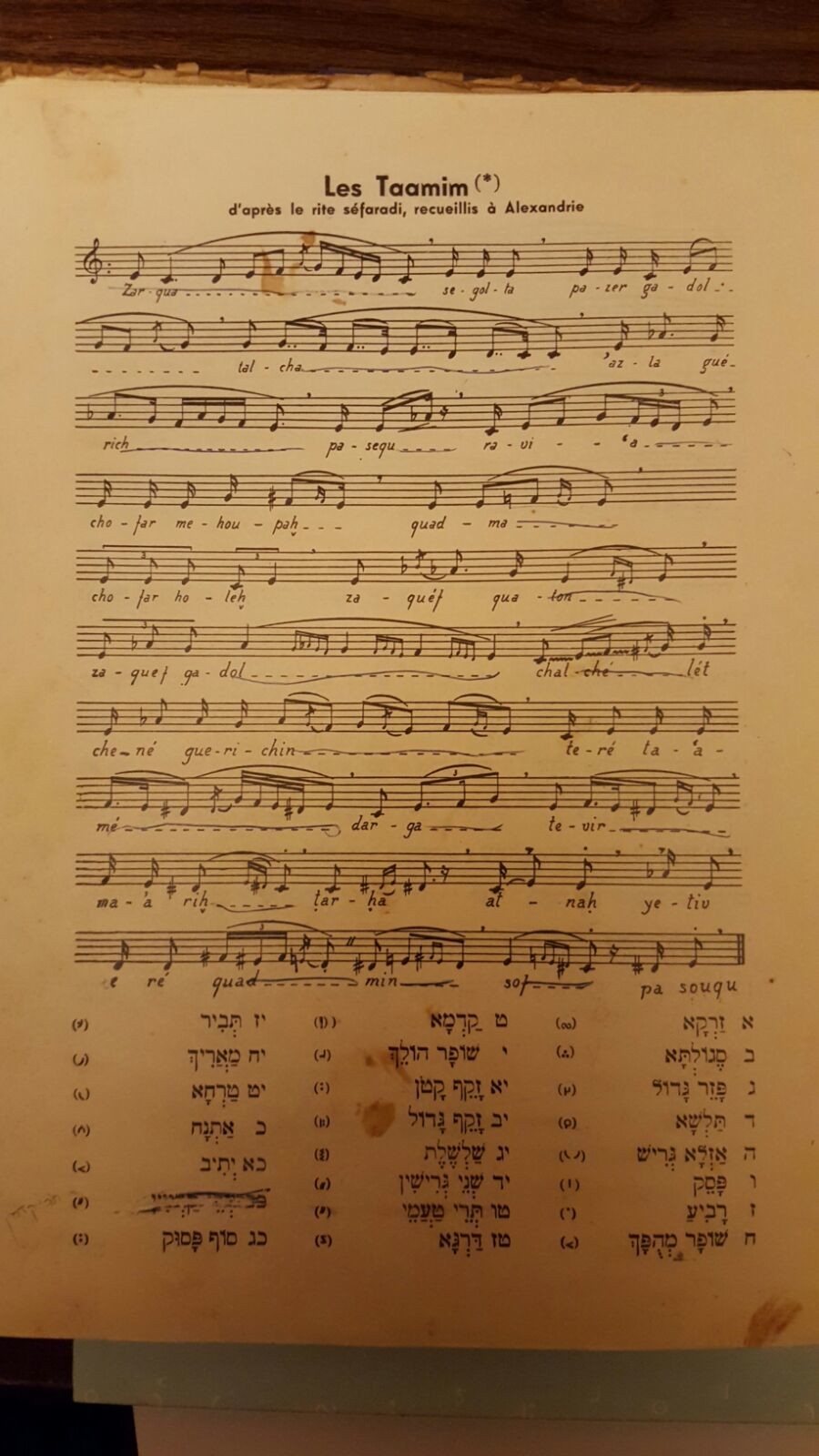 Not the answer you're looking for? Browse other questions tagged history music trop-cantillation .

18
Were our symbols for trope and nekudos created by the Masoretes, or transmitted by them?
9
What is the origin for the names of the various trope/cantillation signs?
1
Were the various "songs" that were sung by individuals or groups of people sung using "trope"?

2
Trop of tvir and dargah
2
When and What was the first Hebrew Sefer published?
3
How was the Torah written by Moshe (were there spaces)?
1
What dates were the Talmuds and Midrashes written?
4
When was the Midrash Tanhuma written?
6
Using Eicha trop when learning
3
Creating songs in your head (lyrics and melodies) on Shaabath
0
Who built the first Jerusalem wall and when?
2
How many taamim/cantillation/trop marks are there?