Wearing a Kittel at the Seder

I grew up with my father wearing a Kittel at the Seder. My father wore a Kittel at the Seder immediately from when he got married. Over the years I have heard that some people do not wear a Kittel the first year, and in some instances only the one leading the Seder wears a Kittel. Who wears? Starting when? When not? Why? (sources please)

Netziv, in the introduction to his commentary on the Hagadah, Imrei Shefer, notes that some say the reason for the kittel is to remind one of death, and we shouldn't be too happy on seder night. He rejects this reason out-of-hand.

He suggests instead that we're recreating the experience of eating the Passover offering, and has sources to indicate that people would wear fine Egyptian linen clothes for special occasions like that.

While it's purely conjecture, you could suggest that according to reason #1, maybe your first year of marriage should be super-duper happy (so no kittel); according to the Netziv's reason, there should be no difference between your first married year and others. But it's a source.

(Sort of a repeat of part of R'Shalom's answer, but with a source for his conjecture, so I'll just answer separately.) Taame Haminhagim 503 says the reason one wears a kitl is to keep him somber by reminding him of death; he adds that because of the a mourner wears it, but a bridegroom (in his first year after marriage) does not (as he should be happy).

An extensive educational and entertaining treatment on this topic Here

My family,as well as many others in Klal Yisrael, (see Haggadas Arzei Levanon) (also Chasidei Gur) does not have the custom of wearing a kittel at the seder.

R' Herschel Schachter discusses this in his Haggadah*: 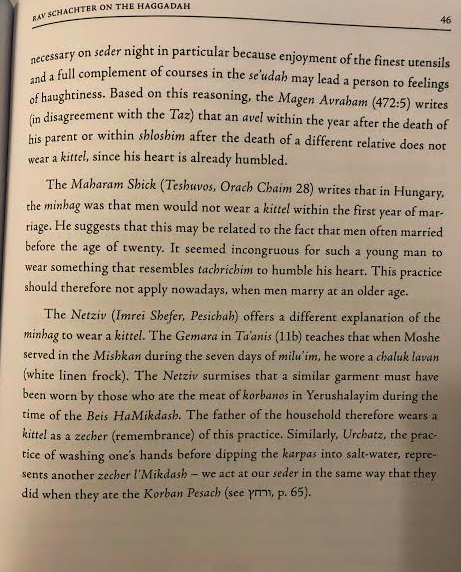 This does not exactly answer the original question, but there is another relationship between Yom Kippur and the seder night of Pessach. A Korban Toda is never brought during the day before Yom Kippur. As well, a Korban Toda is also never offered on Erev Pessach. As for the matter of wearing a kittle during the Seder, it should be sufficient even if only the leader wears one, as a sobering effect on the entire group.

Not the answer you're looking for? Browse other questions tagged minhag passover clothing passover-seder-hagada kittel .

2
The kittel as tachrich
0
Wearing the Kittel

7
Speaking while wearing Tefillin - revisited
3
When do Yekkes first don a kittel?
2
What kind of shoes are worn by very haredi jews?
1
Tucking in Tekheles
3
How to create a Seder to accommodate a large age/education range?
10
Shalom Aleichem and Eishet Chayil at the Pesach Seder?