Can you give me a link to where I can confirm that the Dead Sea Scrolls state 'they pierced' and not 'lion'?

Tehillim 22:17 (17 is the counting in Jewish editions) in the Masoretic text reads:

17 For dogs have surrounded me; a band of evildoers has encompassed me, like a lion, my hands and feet.

(I cite Rashi above only for completeness and to show how the traditional Jewish interpretation. It is not needed for the answer to the question.)

The answer to your question is No. The assumption that the word "pierced" is in the Dead Sea Scrolls is not true. As we see in the following:

fragments containing Psalms 22:17[16] were discovered among the Dead Sea Scrolls (DSS). In the first fragment, which was found at Qumran (4QPs-f; known as the Qumran MS, the word in question is not preserved.

In the second fragment, found at Nahal Hever (HHev/Se 4 (Ps); known as the Bar Kochba MS, the word is preserved.

The fragment HHev/Se 4 (Ps) shows the Hebrew letters (kaf), (aleph), (resh), and what appears to be a somewhat elongated letter (yod), which some perceive to be the letter (vav).[3] Thus, the reading of this word would be either (ka'ari) or (ka'aru), respectively.

Although the latter of these two renditions of the term has been the focus of much controversy and discussion, it is a fact that no root verb exists which contains the letter (aleph) in it, conjugated in this fashion (3rd-person, plural masculine gender, past tense), with the meaning of they pierced, as rendered in most Christian translations.

Without the letter (aleph), and using, for the moment, the argument that the last letter [the elongated (yod)] is a (vav), the word would be (karu), for which the Hebrew root verb is (karah), [to] dig [in dirt], such as digging a ditch (e.g., Ps 57:7). In other words, (karu) has the meaning [they] dug [in dirt]. This verb is never used in the context of piercing, either literally or metaphorically, in any of its 15 applications in the Hebrew Bible.

What could cause such a variation between the two terms (ka'ari) and (ka'aru), i.e., with an elongated letter (yod) that resembles the letter (vav)? Since the word (ka'aru) does not exist in the Hebrew language, the most plausible explanation is that such discrepancy is simply a case of scribal variation (or error).

The Dead Sea Scroll version of the Psalm has kaari, but some Xians think it is kaaru because the yod is longer than normal and can be mistaken for a vav.

But here lies the problem: kaaru is NOT a word. There is no such word in Hebrew ancient or modern. Karu is a word -- but that isn't what is in the Dead Sea Scrolls or in any other Hebrew copy of the Psalm.

Ka'aru is not a word but karu IS a word. Some Xians try and say that the word in Psalm 22 should be karu. The only problem is that karu doesn't mean "pierced" either. It means to dig". If you use its cognate 3rd person plural masculine gender "KARU" it translates to they dug. But note that kara or karu do not us the letter "aleph".

Kaf-resh-vav is a word. Kaf-ALEPH-resh-vav is not a word. It is as if someone came upon dutg in English and wants to say it is dug.

BTW the KJV translates ka'ari correctly in other places that arent proof texts misquoted by the GT.

So the KJV translators correctly translated it until they got to Psalms 22:17[16] and suddenly the KJV doesn't know what it means and translates it as "they pierced."

One more little bit of Hebrew grammar. If the word really was "pierced," (which we've proven it is not) the sentence would have an "et" to identify the direct object which would be affected by that verb. There is no et.

I think you're referring to the Nachal Chever fragment. Here's a link to fragment 6 of 5/6Hev 1b 891. I gather that this is the word in question:

And here's a digitally enhanced version of the image, from an article on the topic by Rabbi Tovia Singer: 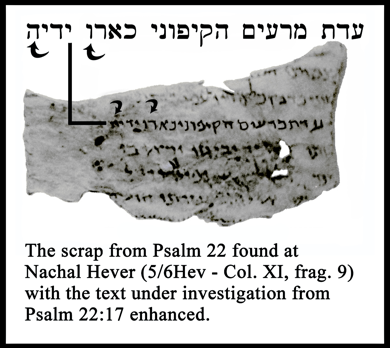 There's also this fragment from 4Q88 from Qumran, but the relevant word flaked off.

Not the answer you're looking for? Browse other questions tagged tehilim-psalms .

7
What ancient sources discuss the meaning of Psalm 22?

5
How do Jews understand this idiom in Psalm 40:7
2
Midrashic sources regarding the Sea splitting into twelve paths
1
Why does the verse in Tehillim (115,7) not say “they have hands…they have feet” similar to the previous verses?
0
Is Psalm 118:19 associated with Hallel and Yamim Noraim?
5
What to do if you're still praying but the congregation began reciting psalms for the state of Israel?
1
Does Psalm 37's 1st verse in the Dead Sea Scroll named 11QPsd start with Aleph?
4
Psalm 82, G.d-Elyon
1
Compilation of Tefillot for specific purposes