I have separated my previous question about Kellogg's cereals into different posts based on the comments on that question.

The cRc recommends Kellogg's cereals with only a k on the box. In my experience, I have not heard of anybody who disagrees with this. This is an unusual situation, though, since normally a plain k does not indicate reliable kashrut supervision. Apparently those cereals are under the supervision of the Rabbinical Council of New England (see linked question), but for some reason Kellogg's does not mark the boxes as being under their certification.

The Rabbinical Council of New England actually has its own logo which looks like this: 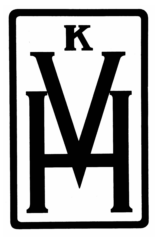 I have seen the KVH logo on restaurants in Boston such as Cafe Eilat which the Young Israel of Brookline lists as kosher. This in addition to the fact that well-known organizations stand by their certification of Kellogg's foods indicates to me that they seem to indeed be a reliable kashrut organization. So why doesn't their logo appear on Kellogg's cereal boxes?

I do not believe that the reason is simply because the symbol is less well-known (compared to OU or OK). A hechsher that some people would have to look up still seems better than something that is not a real hechsher at all.

I also don't believe that the reason is so that they can change at any time (as suggested in the comments on the other post). Kellogg's does print OU and OK on products certified by those organizations, and the same rule should apply. In any case, I just don't see what is gained by printing a K rather than KVH.

Printing a typical Kosher symbol on a label represents a significant commitment on the part of the company. Not only do they have to maintain the item as Kosher, they have to maintain it as Kosher by this specific agency. If they have a falling out, they could have an inventory of labels easily worth over a million dollars and no way to use it without removing the trademarked symbol from each label, a very manual and defacing process.

Because a plain K symbol is not fully helpful to the consumer, the Kosher agencies have been successful in convincing companies to use the trademark on the label. It used to be more common to see "plain K" items from national certification agencies, but the practice is close to eliminated in recent years. The OU and the OK almost always insist on it at this point.

6
Kashrut of Kellog's cereal
2
What's with the plain-"K" hechsher?

19
Why doesn't the OU put DE on food packages anymore?
6
Reliability of the OKS
1
What is the source for requiring constant supervision in a meat restaurant?
8
What Kashrut Agency Uses this Symbol?
6
Kashrut of Kellog's cereal
5
Why should a kashrus certification agency change their standards?
1
Is a meal bracha over dairy forbidden if the Jew in question still has meat in their stomach?
6
Are we permitted to trust the shechita of a shochet who doesn't keep kosher?
3
Identity Magen David/Star of David symbol with K in the middle certification