How far out will Israel's borders reach at the time of Mashiach?

In Genesis 15:18, God promises Avram (Abraham) that his offspring will be given the land from the river of Egypt (it is disputed which body of water this refers to) all the way until the great river of Perat (commonly translated as the Euphrates River).

Is there an obligation for us to have sovereignty over those lands when Mashiach comes so that we will possibly have to go to war to acquire those lands, or will we be able to wait for Hashem to make it happen without having to militarily intervene?

(One can assume that the world will know that Mashiach is the true Messiah and that we will not have to make war at all, even if we are obligated to conquer, but it is possible that there will be some Amalekim or other enemies who will not accept him.

It is also notable that the verse in Deutoronomy 11:24--which talks about which lands we will conquer--makes no mention of the river of Egypt, but rather puts the 'sea that is behind' (Mediterranean Sea?) as the western border.

It may be possible that the descendants of Yishmael will be able to retain those lands because they are the offspring of Abraham. Even though Genesis (21:12) says that Isaac (Yitzchak) will be 'called offspring,' the next verse says that Yishmael is still the 'offspring' of Abraham, so when Yishmael's descendants fully return to Hashem, perhaps they will regain some of the inheritance.)

Your question reads, "How far out will Israel's borders reach at the time of Mashiach?" Affirmed in chapter 47 of יְחֶזְקֵאל, the pshat reading of Genesis 15:18בַּיּוֹם הַהוּא , כָּרַת יְהוָה אֶת-אַבְרָם--בְּרִית לֵאמֹר: לְזַרְעֲךָ, נָתַתִּי אֶת-הָאָרֶץ הַזֹּאת, מִנְּהַר מִצְרַיִם, עַד-הַנָּהָר הַגָּדֹל נְהַר-פְּרָת, is illustrated as follows (remember you did not ask for hard borders and this image is not mine, which explains the presence of words I would not use, such as "West Bank"): 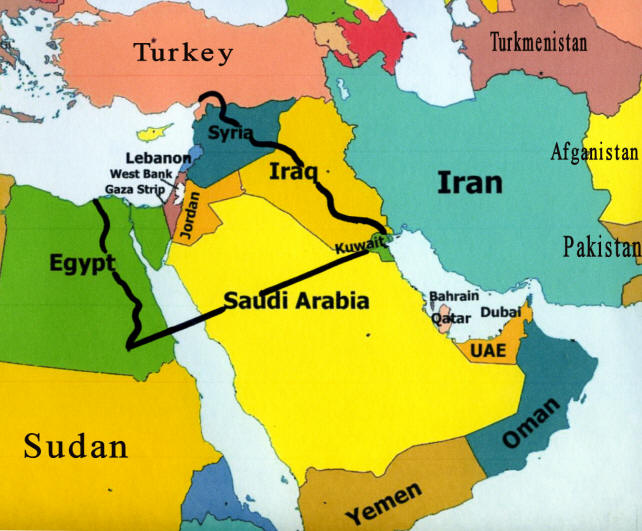 Not the answer you're looking for? Browse other questions tagged eretz-yisrael messiah army-military-war .

4
Will prophecy return in the time of Mashiach?
1
When Mashiach will come, will we still have the Avoda in the Yom Kippur Mussaf?
4
How will we know the moshiach when he arrives?
5
Are the Jewish people commanded to commit genocide?
4
What happened with G-d's promise?
2
What will happen to secular unafilliated Jews in the time of Mashiach?
0
How the tribes' borders were determined?