Is the Leviatan real?

I've heard that he is a giant fish that will be eaten by the tzadikim when the Messiah arrives. But I've also read that it may be just a metaphor. If it is real, what about the Behemoth and the Ziz? What are they?

In general, rabbinic commentators (e.g. Maimonides, Maharal, Ramchal, Vilna Gaon) have been strongly opposed to the literal interpretation of medrash, and these midrashim are no exception.*

To quote from the Jewish Encyclopedia:

These haggadot concerning the leviathan are interpreted as allegories by all the commentators with the exception of some ultraconservatives like Baḥya ben Asher ("Shulḥan Arba'," ch. iv., p. 9, col. 3). According to Maimonides, the banquet is an allusion to the spiritual enjoyment of the intellect (commentary on Sanh. i.). The name, he says, is derived from (" to join," "to unite"), and designates an imaginary monster in which are combined the most various animals ("Moreh," iii., ch. xxiii.). In the cabalistic literature the "piercing leviathan" and the "crooked leviathan" (Isa. xxvii. 1), upon which the haggadah concerning the hunting of the animal is based, are interpreted as referring to Satan-Samael and his spouse Lilith ("'Emeḳ ha-Melek," p. 130a), while Ḳimḥi, Abravanel, and others consider the expressions to be allusions to the destruction of the powers which are hostile to the Jews (comp. Manasseh ben Israel, "Nishmat Ḥayyim," p. 48; see also Kohut, "Aruch Completum," s. v. "Leviathan," for other references, and his essay in "Z. D. M. G." vol. xxi., p. 590, for the parallels in Persian literature). The haggadic sayings obtained a hold on the imagination of the poets, who introduced allusions to the banquet of the leviathan into the liturgy.

Nonetheless, some scholars do identify at least some parallel between these symbolic beasts and actual, extant species:

Ever since Bochart ("Hierozoicon," iii. 705), "behemoth" has been taken to denote the hippopotamus; and Jablonski, to make it correspond exactly with that animal, compared an Egyptian form, "p-ehe-mu" (= "water-ox"), which, however, does not exist. The Biblical description contains mythical elements, and the conclusion is justified that these monsters were not real, though the hippopotamus may have furnished in the main the data for the description.

As to where the hippopotamus is mentioned in the Torah, Rabbi Slifkin argues that this is the identity of the “behemoth” described in the Book of Job: “Behold now behemoth, which I made with you; he eats grass like an ox. Behold now, the strength of his loins, and the power in his belly…”

(I'm afraid the ellipsis seems to include his argument's refutation: "He moveth his tail like a cedar..." which does not seem to be imagery consistent with the anatomy of a hippo: 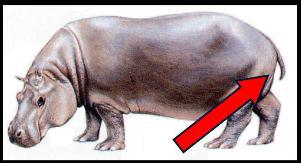 . Presumably he addresses this question in the book.)

*see also: does one have to take a Midrash/Aggadah literally?

Not the answer you're looking for? Browse other questions tagged midrash fish literalism .

24
Does one have to take a Midrash/Aggadah literally?
14
What does it mean that Hashem plays with the Leviatan?
12
Is the leviathan kosher?
6
What was/is the leviathan as described in Tanach and Rabbinic literature?

15
Why do Fish not need Shechita?
10
Bread between fish and meat requires hamotzi?
5
Seemingly weak proof-texts from Tanach
7
Is it kosher to eat live fish
1
Is there a prohibition on eating meat and poultry together?
3
May one marinate fish on Shabbat?
2
Where in the midrash does it state that David told Yisrael that not everyone will be Torah scholars?
12
Rav S.R. Hirsch and fairy tales