Why did HaShem have to introduce Himself to the Israelites in Mitzrayim?

In Shemot 4:31 it says that the people believed that He was HaShem. But after Moshe visit to Pharao he gave the people harsh labour and then something changed..

Question 1) Bnei Yisrael worshiped Avodah Zarah in Egypt; see Yechezkel 20 and Idolatry in Mitzrayim? Thus, Moshe would have needed to remind his brethren that the G-d of their forefathers still cared about them.

And God spoke unto Moses, and said unto him: ‘I am the LORD; and I appeared unto Abraham, unto Isaac, and unto Jacob, as God Almighty, but by My name (Yud-Kei-Vav-Kei) I made Me not known to them (Translation from Sefaria).

The re-introduction is for Hashem to reveal his Shem HaVayah, which connotates the keeping of past promises:

Question 3) The people always knew Hashem. They may have neglected Him, or ignored Him, but they easily turned back to the Aibishter once Moshe arrived and performed the signs:

And Aaron spoke all the words which the LORD had spoken unto Moses, and did the signs in the sight of the people. And the people believed; and when they heard that the LORD had remembered the children of Israel, and that He had seen their affliction, then they bowed their heads and worshipped.

Chapter 3 of Exodus makes a lot more sense when you divide it according to the Documentary hypothesis. Dividing up the chapter into two sources, A Jahwist source an Elohist source, you actually get two separate stories. Thus, singling out the J passages in yellow, and the E passages in blue*, you can cleary read each colored text as a completely independent story.

The J source shows an all powerful known God, the god of Abraham that is already promising the future conquest, with Moses nearly absent. The E passage shows a very human Moses, with a unknown God, and unnamed forefathers.

So, to answer your questions, In source J, They people of Israel already know who YHWH is, as the God of Abraham. Therefore, Moses just needs to prove it was YHWH who actually sent him, as evidenced by his questions. In source E, The people of Israel don't know about God yet, and Moses expects them to ask about the name of the particular god that sent him.

*This division is my own, and is just a sample division which for simplicity ignores any other later sources (EJ and R). the exact division has been subject to various academic debates, e.g. in this paper from 1921. 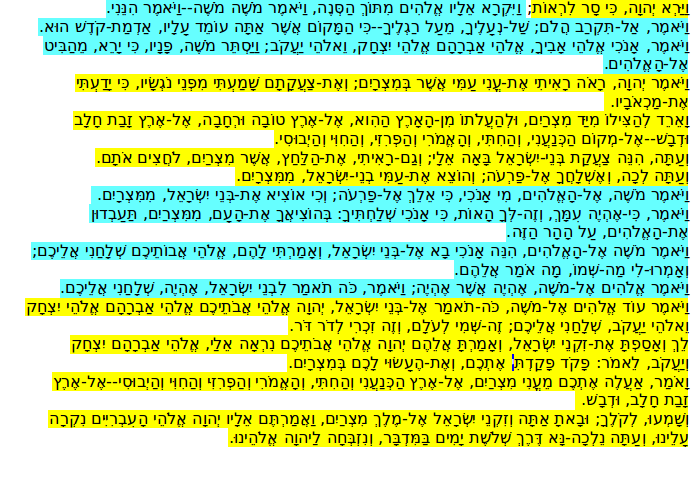 8
Why does God have Moshe use a name the Israelites won't know?
0
Idolatry in Mitzrayim?

8
Why does Moshe tell Hashem that he is 'heavy of mouth and heavy of tongue' - twice?
6
What name of G-d was Moshe supposed to relay to B'nai Yisra'el?
0
Idolatry in Mitzrayim?
0
People joined the Israelites in Egypt during the night of the Exodus?
2
Looking for a source about Avraham compared to Noah
3
Ehyeh as the name of Hashem