In the olden times, before electricity, did religious Jews have lamps that could hold large amounts of oil so that they could use light on Shabbas, similar to how we use Shabbas lamps and have lights that run on timers ?

The answer and the example pictured answers to be question perfectly. A’shabbos lamp’ of this kind was prevalent in Jewish households across various cultures for many ages all the way up to the installation of electricity. The light would be filled with oil and pits and lit before the shabbos candles. Depending on the size, it would burn during shabbos dinner and often die out sometime later during shabbos eve. In the morning a light wasn’t needed, and by sundown shabbos was over anyway. The only timer attached was the mom of the house having to do the prepping and lighting of this lamp.

These lamps were to be ignited before Shabbos began and because of Jewish law, they could not be extinguished by man before Hawdoleh. This clearly means that they burnt during the evening and during the night before they extinguished by themselves during the day of Shabbos. It could not have been otherwise.

I have three of them :-), one was made by 1700 in central Europe (length about 60 centimetres, it could have been in a Yeschiweh, it's huge!, a merchant found it in a barn in Alsace, apparently it has been stolen by the invading Germans in WW2 or it has been hidden before), and I have a much shorter one from 1850-1880 which I bought from Aschkenasim in Israel, and then I have an other long one from France. It's from the early 19th century from the region of Tourraine. In 1791, the French national assembly invited the Jews to come to France again (they had been expelled in 1394), and everywhere a Shul etc needed new Shabbos Lamps, so they built the same type of the baroque lamps from the two centuries before, but they added some arms for regular candles. This type was quite common amongst Jews during the 18hundreds.

Some days ago I found an other Shabbos Lamp. It's short, about 30 cm, and it has a double eagle on top (this is the symbol for the Byzantine empire and the for German empire from 1356 to 1806 (this lamp is already the baroque type). It seems to be from 1650 - 1680, the oldest one I've ever seen apart from that ulta rare one in New York from 1330 of course.

If there are questions, please feel free to ask.

They had lamps that could provide light for many hours (not just the meal). Whether they filled them up each week to get extended light or just added enough oil for Friday dinner, I don't know.

Here is an example from the 14th century: 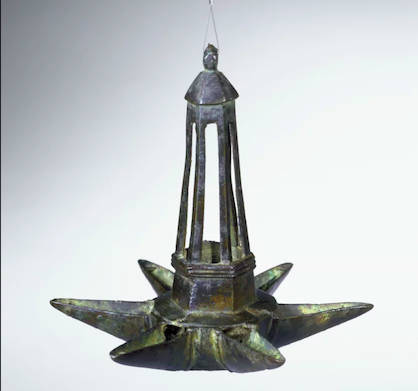 The image is taken from the catalog entry for the item in the Jewish Museum in New York. Here are excepts from their discussion:

During the Middle Ages, star-shaped hanging lamps illuminated rooms in houses and castles throughout Europe. Each lamp consisted of a shaft from which was suspended a star-shaped container for oil and wicks, and a catch basin for overflow fuel (missing on this example). In Jewish communities, such lamps were also used for rituals -- the kindling of lights in the home to inaugurate Sabbaths and festivals, and for havdalah. [...] By the sixteenth century, the star-shaped lamp had fallen into disuse among Gentiles, but it retained its form and function in Jewish homes.

The faceted form of this lamp is characteristic of fourteenth-century Gothic metalwork, such as the set of five nested beakers, dated before 1330, that belonged to a Jew in Kutna Hora. [...] According to the records of the first known owner of the Jewish Museum lamp, Siegfried Strauss, it was excavated in the Jewish quarter of Deutz, a city across the Rhine from Cologne.

According to this vendor's site, an average oil lamp burns about 0.5 ounce of oil (of an unspecified type) per hour. My own experience using lamps with olive oil when camping suggests that that estimate is high. (I have not done the measurement or used them on Shabbat.) If we go with the estimate from that site, 6-8 ounces of oil would provide light all night and into the following day.

I couldn't find any sources saying how full people filled these lamps before Shabbat -- i.e. whether the goal was "light until we retire to bed" or "light until it's time to make havdalah".

Not the answer you're looking for? Browse other questions tagged shabbat history lighting .

11
What's the best way to make wick-and-oil work for Chanukah?
11
Why do some women light additional shabbat candles for the past weeks they didn't light?
5
Lighting the menora in shul and at home. How many brochos need be said?
10
Using an oven timer on Shabbas
2
Reconciling the Torah and history regarding the Jews' response to reward and punishment
6
Using a flickering bulb on Shabas
9
How old is the chanukiyah?
15
If the lulav and etrog are biblically mandated, how were people in cold climates able to obtain them before modern times?