This type of poetic symmetry is common in many places where "song" is used in Tana"ch. It is esp. common where nouns and verbs are used, but it is not unique to such construct (I.e. it could be noun / adjective). I'll use an example from the end of Mishlei as you should be familiar with these verses:

A woman of valour who can find? For her price is far above rubies. The heart of her husband doth safely trust in her, and he hath no lack of gain.

("Symmetrical" - noun at beginning; noun at the end)

You also see this type of parallelism in the Torah even if not associated with a "song". Example:

And G-d will remove from you, all sickness; and all of the evil diseases of Egypt, which you know, He will not place on you but will give them upon all those that hate you.

The books of Tihillim (Psalms), Mishlei (Proverbs), and Iyov (Job) were cantillated to music and therefore had carried a different priority of cantillation marks than the other twenty-one books of Scripture. In this regard, this particular verse appears in the Masoretic Text with the following disjunctive and conjunctive cantillation marks.

The Masoretic Text therefore helps to understand why the verse appears in this particular grammatical order. That is, the cantillation in Biblical Hebrew stems from the vowel points of the words set with particular disjunctive and/or conjunctive cantillation marks, and therefore also provides the logical understanding in reverse cascade order. The following diagram provides the schematic logical understanding of the verse in reverse cascade order (please click to enlarge). 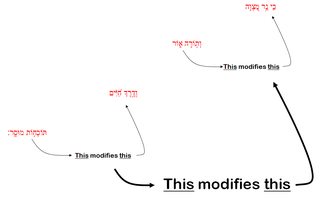 Mishlei (Proverbs) 6:23
23 For the commandment is a lamp; that is, Torah is light.
What is meant by this phrase is that the way of life comes through the reproofs of discipline.

Before closing, what would have been wrong with the following, which would have made more sense and would have aligned with the remainder of the verse?

Second, M'huppakh conjunctive accent is terminated by Dechi disjuntive accent, which closes the clause (and the logical thought). In other words, when the Atnach-dominated clause contains three or more words, the Dechi accent appears as the subordinate disjunctive accent.

Third, and most importantly, the Hebrew word נֵר is one syllable-long, and therefore is too short to take the Dechi disjunctive accent, and so the rules of cantillation and accents had forced the swap of the placement of the words נֵר and מִצְוָה. Thus the correct arrangement of the words in this verse appears as follows in the Masoretic Text.

In summary, the division and order of words and phrases within the verses of Scripture were not only musical, but also logical (and were driven by words, their vowels, and their respective placement in the verse). This hybrid of logical and musical arrangement of words and verses not only helps to understand and clarify Scripture, but also enables memorization, since both the logical and musical arrangement appear through the very same cantillation marks.

Not the answer you're looking for? Browse other questions tagged parshanut-torah-comment words mishlei .

6
Order of words (Oizer U'Moshia) in Shemona Esrei
4
How many languages were used by Shem's descendants?
3
When the terms "sasson" and "simcha" are mentioned together, is there meaning or reason to the order?
4
Why ever rely on a vav hahipuch?
7
Why is this phrase flipped between Avinu Malkeinu and Tachanun?
3
Difference between Mishlei 11:13 and 20:19
2
Please explain the difference in the order of naming Tzelafchad's daughters
3
Why is Pasuk 4:20 in Shemos out of chronological order?
5
Why do we change the order?