Feather in hat on shabbas

Can one go out in the street on shabbas(without an eiruv) with a hat that has a feather or pin in the ribbon?

Is it considered a masuaei (load)?

If it is serving a decorative function, it's not a problem. (See Shulchan Aruch Orach Chaim 303 and 310 and Shemirath Shabbath K'Hilkhatha 18:12. Hypothetically, if there's a chance the one wearing it is likely to take it out in reshuth harabim, then there could be a reason to forbid it. See Orach Chaim 303:18. Also, if the hat has a stiff brim that is more than a tefach, that could be a separate problem on Shabbath, possibly even with an eruv [see Talmud Bavli Shabbath 138b; see also Mishna Berurah 301:152.)

Wearing a tachshit (in the street) is permitted on the same general principle by which clothing is permitted. Like garments, a tachshit is considered subordinate to a person, almost as though it were a part of the person himself. However, unlike a garment, a tachshit is not permitted unless it is needed, either as an ornament, or to protect his body, or provide physical comfort.

Examples: 1) Ornamental: Jewelry (earrings, necklaces, bracelets, etc.), decorative berets worn in hair, decorative pins, a feather in a hat, a necktie (a necktie is NOT considered a malbush – garment!) 2) Protective: a bandage or a dressing over a wound, cotton in an aching ear, rupture belts, orthodontic braces or dental bite plates.

I found in the Rivevos Ephraim 4:97:20 this question. Rav Ephraim Greenblatt asked Rav Nochum Kornmehl (Tiferes Tzvi) this question and Rav Greenblatt put it in his sefer: 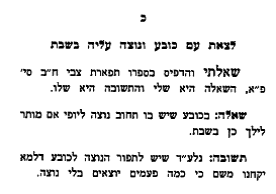 He answered that one should sew the feather to the hat because one might take the feather out since sometimes one will go out without the feather.

Rav Yisrael Taplin goes through some Piskei Rav Moshe Feinstein and this is one of them: 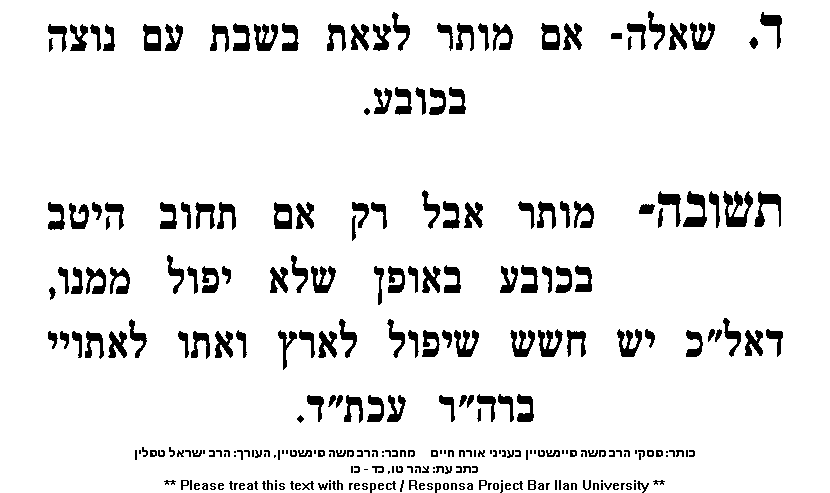 One should make sure it is snug to the hat so it doesn't fall off in a reshus harabim.

The Be'er Moshe in chelek 3 siman 69 allows one to wear a feather in one's hat on shabbas,however he was not too fond of the idea for a Yiras Shemayim.

Not the answer you're looking for? Browse other questions tagged halacha shabbat clothing hotzaa-carrying-reshuyot .

10
Using an oven timer on Shabbas
1
squeezing lemon juice onto slush on shabbas
3
Drinking medicine with a straw on shabbas
3
Fasting on shabbas 10 Teves
4
What is the black pin called that mourners wear?
0
Can a public road include an underground area below it to qualify as a Reshut Harabim?
3
May a woman wear a jeweled key pin on Shabbat in an area that has no eruv?
2
Where in Brooklyn can I buy the round chasidish hat?
7
Food cooked on Shabbas for Pikuach Nefesh
2
Removing dead fish from fish tank on shabbas