Is it allowed to tie tzitzit using a cow hitch?

Would it be permitted to attach tzitziyot using a cow hitch (a way of attaching a rope or lead without use of a knot - pictured below), in order to be able to remove them before washing a garment so that they do not become untied or unraveled?

Is it permissble to attach them this way according halakhic tradition? 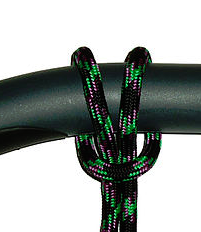 The halakhah actually discusses the idea of having "ready-made" ssissiyyoth which are then attached to the corner of a garment. This concept is called `oseh min ha-'asui (essentially, "attempting to fulfill the misswah [of ssissith] from something already made beforehand"), and it is not permissible.

"And [when the misswah of ssissith is] performed using [ssissiyyoth] that were already made, it is invalid. What is a practical example? Someone brought a [severed] corner of a garment on which there is [already a] ssissith, and sews it onto another garment - even if that corner has a square ammah of cloth still attached (i.e. the smallest possible area of a garment that is still subject to the laws of ssissith) - it is invalid. As it is said, 'wa-`asu lahem ssissith - And they shall make for themselves ssissith' (Bamidbar 15:38) [in order to perform the misswah] and they should not attempt to perform it [using ssissiyoth] that were already made, for this is like a garment that became messuyyesseth ("tassled") on its own. But it is permissible to untie ssissiyyoth from one garment and [re-]tie them onto another garment - whether they contain tekheleth or whether they are completely white."

And although it should be obvious, the transferring of ssissiyyoth from one garment to another mentioned in the closing statement this halakhah does NOT mean that one may take whole/tied ssissiyyoth from one garment and simply attached them - with a cow's hitch or by any other means - to another garment. To do so would violate the first statement of the halakhah. Rather, it means to completely untie the ssissiyyoth on one garment, thread the strings into the corner of another garment and re-tie them.

(Translation: "To untie ssissiyyoth...and to hang them" - Not that one is transferring the ssissith while it is still fully-tied. Rather, he is completely untying the strings and from them making a new ssissith.")

In short, ssissiyyoth that are put onto any garment while already fully-tied are invalid without exception. Thus, attaching them impermanently with a "cow hitch" to the corners of your garment so that you may remove them and easily re-attach them is not permissible.

Not the answer you're looking for? Browse other questions tagged halacha halacha-theory tzitzis tallit-katan .

15
Why do tzitzit have fabric-squares on the corners of the garment?
5
Tzitzit Knot Problem
0
Using a flag as a tallit
5
Thin or Thick Strings for tzitzit?
4
Tzitzit: new bracha after sport?
1
Does anyone have a good video tutorial for tying Tzitzit knots?
7
May a woman tie tzitzit to be worn by a man?