This question lists rationales for the sin offering a woman must bring after giving birth, among them for the words she may have uttered. How is this reconciled with a person not to blame for words uttered in pain, as cited in Goldberg (1996) Mourning in Halacha.

Even if a sick person, due to his pain and suffering, blasphemes, God forbid, it is proper for the visitor to overlook it and not even to admonish the sick person about it, for a person is not to blame for words uttered in pain. 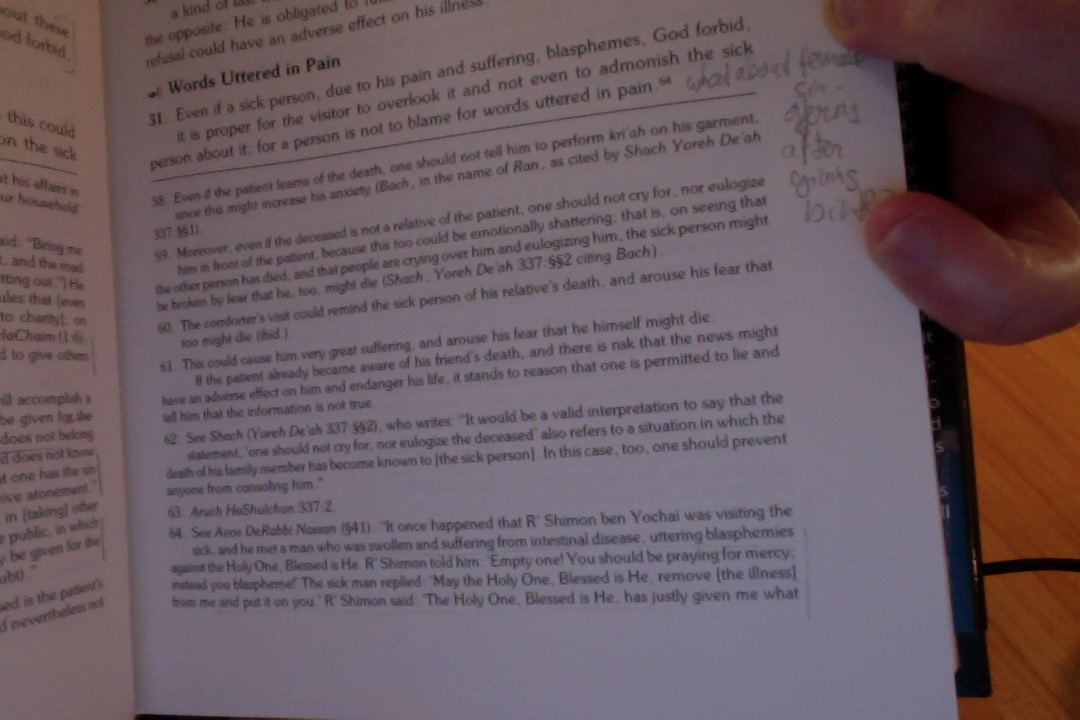 The story is from Avot deRabi Natan. Rabbi Shimon ben Yochai visited someone who was in severe pain and cursed out God because of it. The conclusion of the story is that the best thing for the visitor to do is be a good listener, not show up to lecture the sufferer about faith.

So if I see someone now cursing out God because of the pain, it's not my place to give them a talking-to.

There are three distinctions between this and the woman in childbirth: a.) it's between her and God, no one is lecturing her. b.) she brings the sin offering once she's recovered; we're not demanding any religious thought of her while she's screaming in pain! c.) most significantly, the midrash about the sin offering isn't "in case she cursed out God in pain", but rather "in case she swore never to touch her husband again." We may not take people to task for blaming God when in pain, but an oath is an oath. (Unless someone was tortured into taking the oath, which this wasn't.)

The Gemara is not saying that the Korban is to atone for the words spoken during childbirth. It is to atone for reneging on what was sworn then. The concept of ignoring what was said during a time of distress is that complaints which would otherwise be inappropriate can be understood as coming from pain. This wasn't meant to apply to promises and swearing. A person can control himself that much.

Moreover, Rav Yosef asked on this reasoning that the Korban does not match that of all other Shvuos. It is unusual for an Amora to critique a Tanna on Halachic matters (especially using the term מתקיף לה, which connotes refuting rather than begging to understand). Besides, the Gemara does not bother answering the question.

It seems that the point of the question was to point out that it wasn't meant to be taken at face value. In fact, hardly anyone would actually verbalize such a vow.

The Maharal explains that this vow is an inherent intention, albeit not a conscious one. It is a position which doesn't need to be expressed. He explains that you entered a marriage for your benefit and here it turns against you.

It is not an actual Shvuah and is not treated as such but there was a powerful break from the bond with her husband, analogous to a verbalized vow.

Not the answer you're looking for? Browse other questions tagged sin korban pregnancy-birth choleh-sick .

7
Why must a Yoledet, a woman who just gave birth, bring a sin offering?

21
Why are women unclean longer after giving birth to a girl?
8
Why “new-mother bat her-father” for a woman who gives birth?
3
Sin offering for Zavah?
7
Why must a Yoledet, a woman who just gave birth, bring a sin offering?
9
Why do all women deserve to suffer for the sin of one woman, Chava?