In schul, I've noticed that there is a pair of peshutim which have been partially deconstructed. In particular, I noticed that the partitions between the compartments of the shel rosh seemed somewhat unsubstantial, in fact, they had no relation to the lines on the exterior of the bayit! Needless to say, I was somewhat surprised, as I was under the impression that the separations needed to be complete between the compartments. Is this not so?

Pictured below are photos of the interior of a bayit of of a tefilla p'shuta (shel rosh): 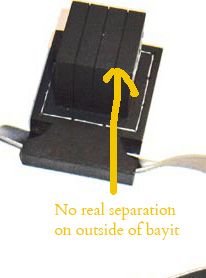 Almost any shel rosh you dissect will be like that. A few years ago people took notice of this. They started carrying on saying everyone's Teffilin were passul. The Poskim ended up saying it was kosher. Rabbi Belsky was one of the ones who said not to worry, IIRC.

At that point in time, I personally was in the middle of having a new pair written up for me and asked Rabbi Dovid Feinstein if I should try to get a Shel Rosh that were separated all the way down. He said 'don't bother. No-one knows how to make them like that anyways'.

A little background. The issue at hand is brought in the Mishna Berurah siman 32 on siff 38. There he brings Achronim discussing Sofrim who were using glue or stitches to attach four separate pockets of leather to make one shel Rosh, with this they considered all the compartments to be from one piece of leather, which is a requirement. This was allowed, although not ideal, being that there were poskim who did not want to rely on using stitches or glue to consider it one piece of leather.

The major problem was that they were also using glue between those battim so that they would not spread apart from each other. If we consider the glue as having made the leather onto one body, than here too we should consider it as one and there are no longer four separate boxes, but rather one box with three separators inside.

The Chayei Adam quoted in the Mishna Berurah left it as a question if Teffilin such as this would be kosher, even bidieved. See Biur Halacha there as well.

Getting back to modern day Teffilin. Nowadays Teffilin shel rosh are made from one piece of leather. So even if they are glued between the battim, we will not be in that situation of passul bidieved.

Of course there is also siff 40 in the Shulchan Aruch there where we see the chritz, the channel between the battim must be noticeable. The fake chritz put into the plastered on black paint is not really good as mentioned in that Chayei Adam brought again in the Mishna Berurah #188. However, here the Mishna Berurah does not use such a strong language. In fact he changes the wording of the Chayei Adam and refers to his displeasure in the practice as מיאן, I'm assuming based on the fact that the Chayei Adam's major issue was the contradiction between using glue for both uses.

Again, having our Teffilin like this is not ideal, as our poskim have been telling us for hundreds of years, since the time of the Magen Avraham, but apparently the Sofrim have been practicing this for at least that long as well.

Not the answer you're looking for? Browse other questions tagged halacha tefilin .