Is Warhammer (and similar games) an issue of avoda zara?

Are tabletop wargames, such was Warhammer, Warhammer 40K, and Kings of War an issue of avoda zara?

To play the game you first have to purchase miniature figures of different races. Some are human, some are not-human, and some are human-esque.

Here is an example of an Undead miniature: 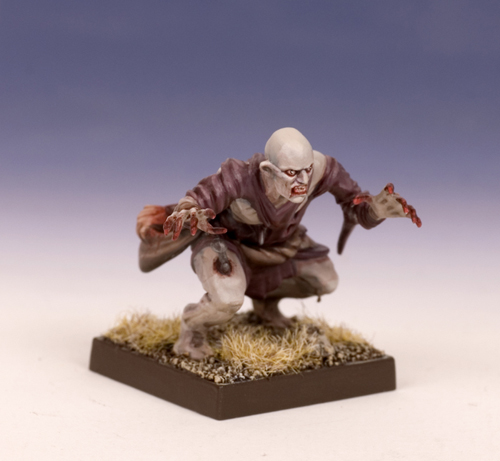 After purchasing the pieces, you have to glue them together and then paint them.

I am aware that there are certain laws about creating protruding images of human faces, but there are a variety of approaches to how these laws apply in the present day. If anyone is aware of this topic I'd appreciate some insight. I am not looking for a final psak.

It appears that you're asking 2 different questions:

(as adapted from @DonielF's stellar answer to: "Are Totem Poles considered to be Avodah Zarah?")

A further commandment prohibits looking at and thinking about idols. “Do not turn to the idols” (Lev. 19:4) is seen as a wide-ranging rule against studying idolatrous culture and literature (Mishneh Torah, ad loc., 2:1-2). This rule against learning about idolatry should forbid virtually worshipping the idol, as well. In playing the game, you are watching the idolatrous service as it happens, even though you are not technically participating in it.

Authorities are divided whether this prohibition applies to all idolatrous or only those that are no longer worshipped. In response to a question whether a teacher may cover Greek mythology in class, Rav Moshe Feinstein (Iggeros Moshe, Yoreh De’ah 2:53) rejects the suggestion that because no one currently worships the ancient religion, the prohibition no longer applies to it. Instead, he offers permission from another angle, that the education should be from the perspective of debunking the false stories. Otherwise, according to Rav Moshe, studying or watching ancient idolatrous religions remains forbidden.

I recall hearing in the name of Rav Joseph B. Soloveitchik that he permitted studying Greek mythology for the reason Rav Moshe rejected, although I never confirmed this. Even if he did not, we can find others who suggest it. Rav Yair Chaim Bacharach (Chavos Yair, no. 1 secs. 11-12 sv. ve-adayin tzl”a) suggests that the prohibition to say the name of an idol only applies to an idol that is currently worshipped. We may freely say the names of ancient idols. Darkhei Teshuvah (147:4) quotes a responsum of the Beis Yitzchak 1:YD:152) that agrees in principle with the Chavos Yair but is concerned that maybe someone in the world still worships the Greek pantheon. Because of this possibility, he refuses to consider Greek mythology an abandoned religion.

Some contemporary rabbis in Israel seem to follow the Chavos Yair‘a approach. Rav Shlomo Aviner (She’eilas Shlomo 4:167; Piskei Shlomo, vol. 2 p. 45) begrudgingly permits the study of Greek mythology. He cautions that it is full of nonsense and is a waste of time. However, he allows for leniency if necessary because the idolatry has been long abandoned. Similarly, Rav Yehuda Henkin (Bnei Banim 3:35:2) writes that if the religion is abandoned, the gods are no longer considered idols.

In this game, the idolatry is completely fictional. Not only does no one currently worship it, no one ever worshipped it. I believe that even Rav Moshe would not apply the prohibition to this religion because it is not, and has never been, a religion. It is simply fantasy.

It's perfectly permissible. The issue of avoda Zara comes in when you put together/ designate items to represent a god/s. And even that isn't avoda Zara. That goes against the prohibition of "sculpting a figure of God." The actual prohibition of avoda Zara is when a person offers a sacrifice or makes an oath or does any sort of service in which he does for the sake of a god or the such.

39
While playing a computer game, may I "worship" one of the game's "gods" to help me win?
4
Are Totem Poles considered to be Avodah Zarah?