There is a new device called the coravin which allows one to insert a needle into a cork of a wine bottle and the wine flows through the needle by using argon gas (protects quality of wine) and by doing this no oxygen comes in contact with wine. What makes this revolutionary is that now one can extract a glass a wine and put the bottle away for months without losing any flavor or substance (tastes like a brand new unopened bottle).

My question is can one use this device (argon gas) on shabbas. see how it works https://m.youtube.com/watch?v=490BvJQcFKw 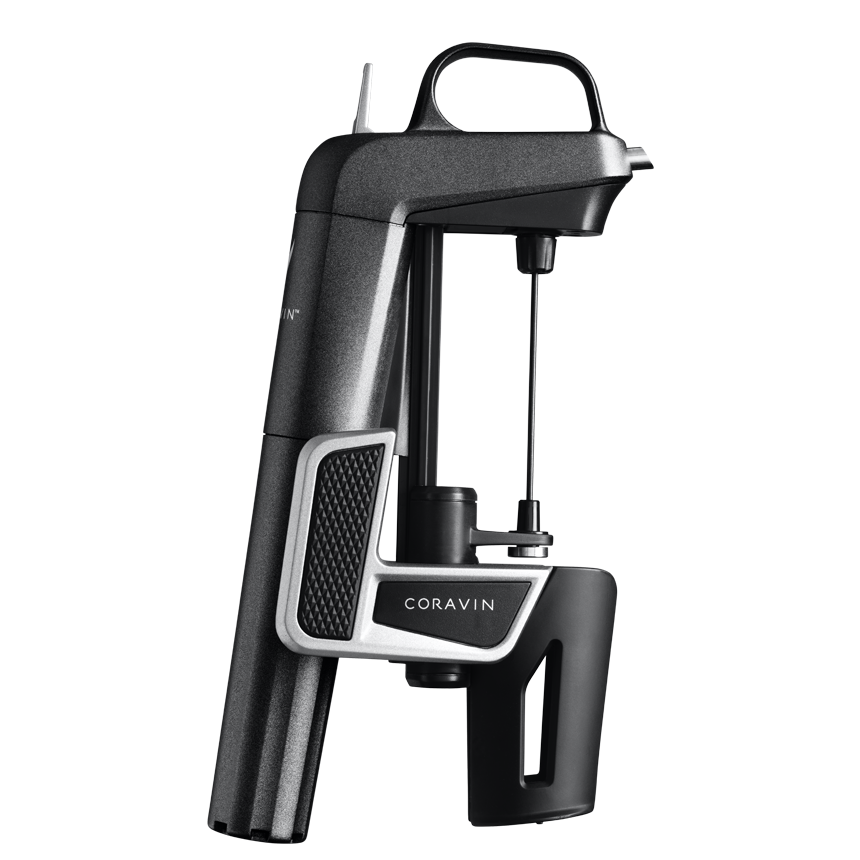 Assuming the question is only regarding the insertion of the needle on shabbos, and not placed before shabbos, this particular device presents a few issues within the prohibition of “creating a utensil” on shabbos which is prohibited. (Shabbos 146)

The Needle is placed into the cork, and gas is then pumped to create a siphoning effect on the wine, which then goes through the tip of the needle and out of the spout. This would seemingly be running into an issue of making a hole in a vessel. Thus perhaps making this hole in the cork is, making a hole in a kli, Turning the cork into a dispenser.

However, a response to this suggestion is that the cork is just a porous material, and all the needle is doing is pushing aside the cork. Furthermore, the hole, once the needle is removed, as the company claims, closes back up right away, which would, for halachic purposes, constitute this hole as not a nekev yafeh. Though perhaps this does not matter, as at the time of using it (בשעת מעשה) it has created a hole, or passageway in the cork for the air and wine to pass through.

Another issue that needs to be addressed is whether the hole being made is a “nekev lahachnis U’lehotzi” a hole that is meant to draw out of or place within (Ibid.). For the needle is passing the argon gas through to the bottle, and then taking out wine.

The Chazon Ish (Orach Chaim 51:12) held that to do such a thing is assur min HaTorah as you are turning the can into a dispenser.

Rav Shlomo Zalman (quoted in Meor Hashabbos Vol. 1 Letter 18:3) allows it based on the sevara that the air coming in and pushing out the juice is insignificant, meaning that the person isn’t pumping air in on the account of “wanting” the air to come in, rather it is only in order for the juice to come out. The logic of Rav Shlomo Zalman is that a hole that is created to insert something, but that insertion is only for the sake of removal, is not the type of hole that the Torah prohibited.

However this contention seemingly does not help for the Coravin gas cartridges, as the person pouring the wine has to push the trigger to put the gas in, as in it is a direct act to “place” the gas inside.

Perhaps one could say that the claim the of the company that the hole closes up, is not accurate, as I had the chance to place the needle back into a new hole and then back into the original hole, I could tell there is a stark difference in terms of effort needed to place the needle back in (much easier), which leads me to believe that there really is a hole being created. If so, even if it is not a helpful hole, and not Boneh, perhaps that is called kilkul (destruction for its own sake, which is not a biblical prohbition) that is still assur medaraban. (This is obviously a debatable point, as its dependent on my own experience, perhaps others disagree)

One possible argument to allow its use is that the hole that is being created in the cork, is only for a short period of time, an that once the needle is removed, the hole is closed up right away. This is based on the idea that the torah only prohibited a structure that is capable of being permanent (Binyan Keva), but a temporary structure (binyan arai). Based on this, Rav Tzvi Pesach Frank permitted making ice cubes on shabbos, despite the fact that one could compare it to making cheese (Megaven) as it is like adding one thing on tip of the other, similar to building a structure. Rav Frank allowed it because since the ice would soon melt, it is not considered a permanent structure, only a temporary one. (Shabbos 102b, Beitzah 32b, Tal Harim 1)

Regarding the melacha of Zoreh, it is also not a problem as there is nothing that is being dispersed by spraying the gas in the bottle. Thus it is not an issue.

However after much research into this topic, it would be permitted to use the Coravin on shabbos, because it the cork is to be viewed as just a plug in a old opening (סתימה לפתח ישן) that, according to the Chazon ish is permitted to make in it a wide opening, even if that is meant to go in and out (פתח להכניס ולהוציא).

Watch here for a series of Shiurim (possibly the only place that has discussed this question in a halachic context) regarding some of the possible issues about the Coravin.

Rav Shmuel Kamenetsky in Kovetz Halachos (Hilchos Shabbos 2:page 482) writes that the Coravin is mutar to use and one can change the gas cartridges as well.

Not the answer you're looking for? Browse other questions tagged halacha shabbat technology grapes-wine .

22
Is using a (non-touch-screen) Kindle on Shabbat permitted?
11
Using a plata on Shabbat
5
Using a bar of soap on Shabbat
5
Jawbone UP on Shabbat
4
Using money on Shabbat
4
Red and white wine Mixed
0
Bracha on nonkosher wine?
2
Does adding a bit of red wine to white wine change the resulting drinks' status vis-a-vis kiddush?
1
Pouring wine into a pagum/used cup in order to reuse the wine inside