As someone who feels like her understanding of the Tanakh has been too skewed by Christian interpretations, I'm interested in finding a book that provides either the main text (in English) with excessive annotations, by verse or section, or with the same, but without the text on both:

Whether or not such annotation needs to come with the actual text of the Tanakh doesn't matter too much to me -- after all, there are plenty of decent English translations floating around on the internet (e.g. on the Mechon Mamre site).

Would anyone have any suggestions as to where I could look for this? I've noticed that The Jewish Study Bible seems promising -- the amount of annotation made me really happy, but I'd like to see if there are any other texts worth considering.

Highly recommended is The Living Torah by the late Rabbi Arye Kaplan.

It's translated into modern English - no thee, thy and thou.

He brings numerous interpretations in the footnotes where available.

He has broken each chapter into sub-chapters - each with its own heading.

He brings lots of maps and charts and images. 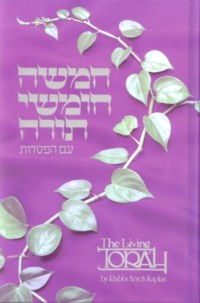 (A Google search will show that almost everybody seems to sell it.)

For a Jewish translation of Nach (Tanach minus the Five Books of Moses) with a compendium of commentaries, I recommend the Judaica Press Prophets and Writings1. I have found that its English summary of commentaries on each verse reliably includes readable paraphrases or direct translations of the most interesting or useful comments of the classical commentaries. The introduction to each volume could be useful in identifying long-running themes.

For really digging into book-wide themes, I suspect that the Maggid Studies in Tanakh series (of which only four volumes have been produced so far) will prove quite valuable. I haven't studied them myself yet, but I am very interested in doing so thanks to this review in the Jewish Review of Books by R' Elli Fischer.

1. It looks like they also have volumes on Genesis and Exodus in the same series.

You might want to check out the ArtScroll Stone Chumash (no, it's not written on rocks).

It contains all of the Torah in Hebrew with a translation, plus Rashi in Hebrew. But what really makes it good for you is the rest of the commentary. They anthologize a whole bunch of the classic Rabbinic commentaries, in English. They of course cite whoever they are quoting, in case you want to look at it inside.

I don't personally use it all that much, but i think it has some notes on running themes.

They also have a Stone Tanach, which i've never used, but sounds like it follows the same format, but for the rest of Tanach as well.

As noted in this answer, the Stone Chumash is a good starting point. It brings classical Jewish commentaries, verse by verse.

This is one example of a category. A chumash is an edition of the five books of torah with (Jewish) commentaries. Lots of editors have published them; the commentaries included vary. (A book that included all the commentaries ever produced would be quite large. Everybody edits.)

A category of commentary that's a step beyond is the miqra'ot g'dolot. These include more-extensive commentaries, but they are usually published in Hebrew. JTS is currently publishing one in English; they've produced four volumes so far. Here's an Amazon link for Sh'mot.

The resources I've listed so far are from traditional sources. You also asked about more modern approaches such as text history/sources. A chumash that incorporates some of this modern scholarship is Eitz Chayim, published by the Conservative movement. It also includes traditional sources and generally does a good job of labeling.

Not the answer you're looking for? Browse other questions tagged product-recommendation tanach books-generally .

7
What was the font of the first printed edition of Rash"i's commentary?
5
Looking for a good version of Maimonides Introduction to his Commentary on the Mishna available online
3
Book on Biblical Archeology
6
Translation/Commentary on Targum
2
Rambam's Talmud Commentary
1
Biblical figures in the Kabbalah
1
Software for Shas-like commentary