What did the Second Beis Hamikdash look like before Herod renovated it?

As penance, Herod rebuilt and remodeled the second Beis Hamikdash (See Bava Basra 4a). Most of the models of the Beis Hamikdash are of this rebuilding.

The original one was built by the poor immigrants from Bavel, and it had wood in a one to three ratio per the orders of Darius. He decreed this so that if the need arose he'd be able to burn it down.

I'll assume you mean the original version from the Persian era. Naturally, being that we don't have enough information on it, there are disagreements, so further note that all of the following is very hypothetical based on the limited information we have available:

Prof. Leen Ritmeyer thought the hechal at the time of Nechemiah looked like this: 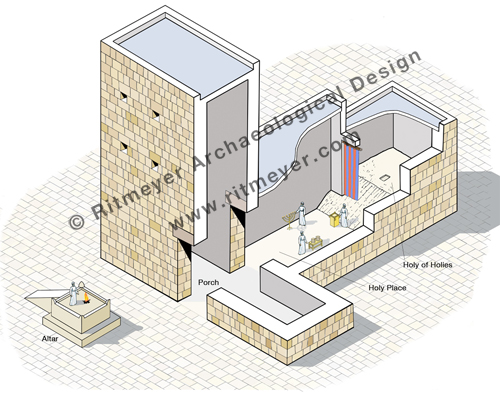 In terms of measurements, Ezra 6:3 is very clear that it was 60 cubits high and 60 cubits wide. The length is not mentioned. I do not know based on what Ritmeyer determined the length. Rambam wrote that the Temple was built as a combination of the First Temple and Yechezkel's Temple-vision. According to Daat Mikra on Ezra 6:3, footnote 16, this would mean that the Second Temple's hechal's length was 20 cubits. It seems Ritmeyer thought the mesiba that surrounded the hechal was built by Herod. Patrich appears to concur; contemporary architecture seems to prove this (i.e., mesibot as features in pagan temples were common in the Herodian period). I don't understand the length of Ritmeyer's ulam (entrance hall/porch). According to Middot, in the Second Temple it was 100 cubits, while in the First one it was 20 cubits (equal to the length of the rest of the hechal; i.e., there weren't parts that stuck out/were wider than the rest of the hechal). 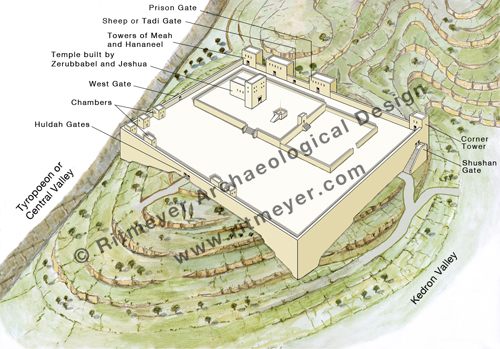 If I may, I also find the locations of Ritmeyer's leshachot (chambers) problematic. He puts them at the edge of the wall that surrounds the Temple Mount. The mentions of the leshachot in Ezra and Nechemiah seem to suggest that they were at least part of one of the courts of the Temple itself and not simply on the edges of the Mount. This seems most evident by the mention of what eventually became Tuvia's lishkah (Nechemiah 13:4-9):

"Earlier, the priest Eliashib, a relative of Tobiah, who had been appointed over the rooms in the House of our God, had assigned to hima a large room where they used to store the meal offering, the frankincense, the equipment, the tithes of grain, wine, and oil, the dues of the Levites, singers and gatekeepers, and the gifts for the priests...When I arrived in Jerusalem, I learned of the outrage perpetrated by Eliashib on behalf of Tobiah in assigning him a room in the courts of the House of God. I was greatly displeased, and had all the household gear of Tobiah thrown out of the room. I gave orders to purify the rooms, and had the equipment of the House of God and the meal offering and the frankincense put back."

In the Hebrew it seems that Elyashiv had taken over a lishkah that had once held tithes of grain, along with some of the vessels of the Temple. Putting it at the edge of the Temple Mount does not seem to make sense. Moreover, the phrase "לעשות לו נשכה" seems to suggest that the lishkah was built then. It then says "בחצרי בית האלוקים" - "courts" in plural. To me it sounds as though we are talking about a lishkah that existed in the inner court and was then renovated for Tuvia, causing it to spill out into the outer court - thus making it within both of the courts (בחצרי).

Here's my suggestion for where the leshachot might have been located: 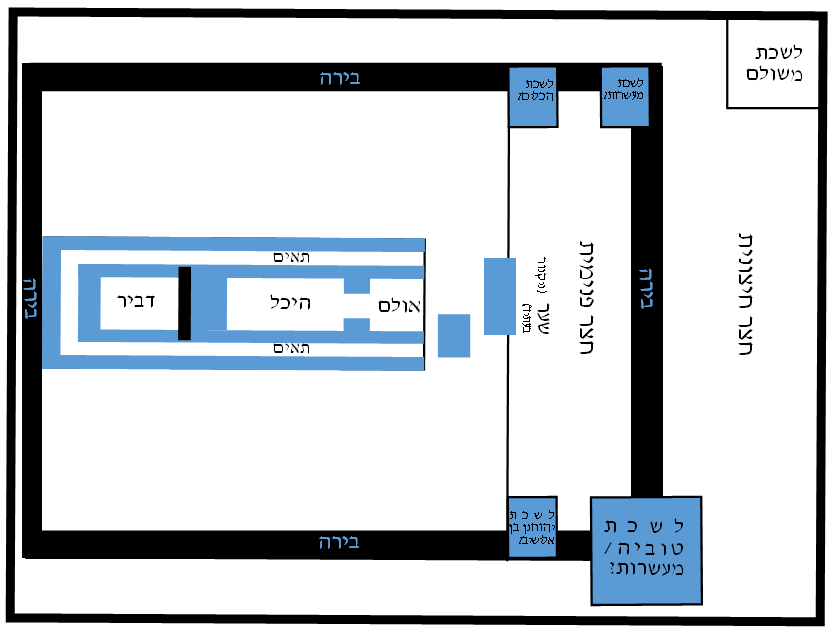 Lishkat Meshulam in the edge of the outer court is per Prof. Chanan Eshel's essay on Yerushalayim in the time of Nechemiah, pg. 334. Don't mind the nonexistent distance between the Western side of the Birah and the back of the hechal. The design is mainly for the proportions and locations of everything. 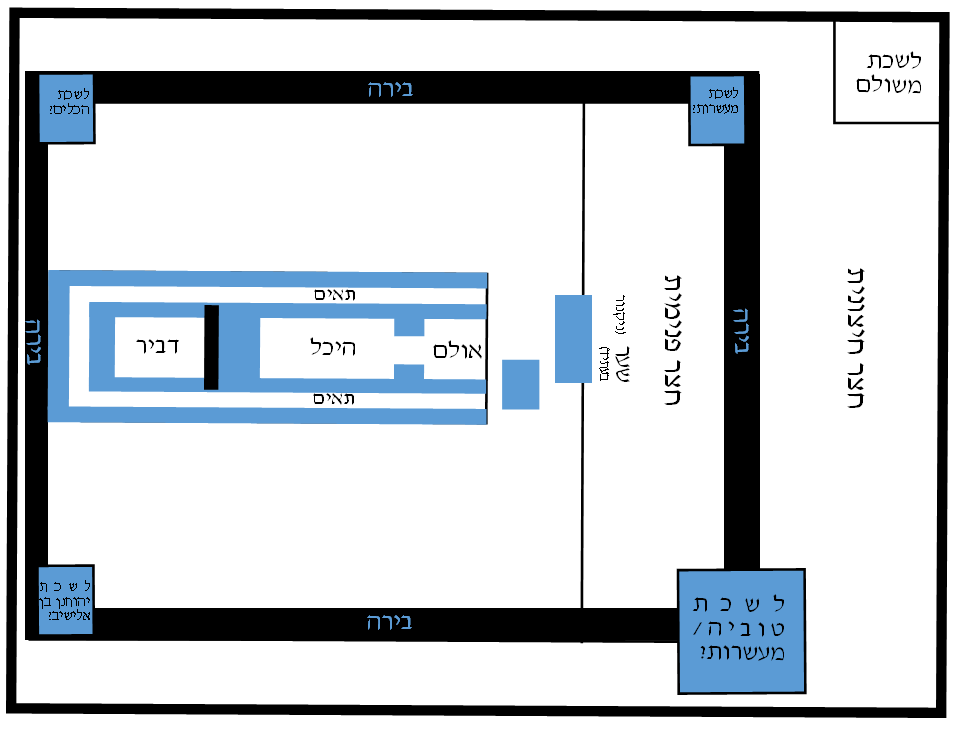 This is of course highly hypothetical. Even if the general design is correct, the location of the different leshachot could vary, and there may have even be some that we are not aware of, having not been mentioned in the text. I reasoned there were four for the following reasons:

Hope this helps for getting at least a partial picture of what the Second Temple looked like originally.