Why separate verses for the camel, hare, and hyrax?

In vayikra 11, we're given an overview of the kosher and non kosher animals. Among mammals, it singles out four as explicitly non kosher: the pig for only having split hooves, and the camel, hare, and hyrax for only chewing their cud.

I can conceive of different reasons for having three separate examples in the later category (different types of cud chewing or inappropriate hoof splits ...), but what I can't conceive is why we need three separate verses (4–6) for these examples. Can anyone shed some light on this?

Blockquote I am not an expert in hares and hyraxes but the camel's issue is foot related but the others are cud related. I think the hare has 2 types of poop. One which it re-eats and the final form. Presumably the hyrax does the same thing with barf. We need the other 2 to say that these activities don't count as cud chewing.

i'm upvoting your answer and adding to it. People mistakingly assume that the Hare and the Hyrax chew their cud in the same way that the camel (or cow or deer) does, this is very far from the truth. Chewing of the cud the way that the camel does requires a multichambered stomach, which neither the Hare nor the Hyrax have. As you have pointed out, the hare often chews it's feces, this is not chewing of the cud. And i believe the Hyrax does a different system as well.

So i believe your point makes sense. Why 3 different Pasukim?

Therefore, to Israelites who originally might not have known the difference, the Torah uses the same terminology of chewing the cud, seeming superfluous. But now that we have the science and the observation to know that they are different, we can key in on the hint that the Torah is giving us.

The assumption behind this question is that every letter, every word and every verse of the Torah is measured out carefully. Thus, we see that from an extra vav, a halacha may be derived. When, in the discussions often found in the gemara, one Tanna interprets an extra word in one way to prove his point, we must take pains to explain how his disputant, the other Tanna, makes use of that extra word. When an entire narrative is repeated, as with Eliezer and Rivka, this is deemed extraordinary and goes to show Hashem's great esteem for the Avot. When in parashat Noach, the Torah adds a few words in one instance so as not to use the cruder language, this is deemed extraordinary against the usual background of brevity and so teaches us the importance of refined language.

To sum up, there is this well-established notion that the every jot and tittle of the Torah is deliberate and that there is no unneeded repetition. While on a peshat level, many Rishonim would talk about natural linguistic motivations for extra words -- e.g. kefel inyan bemilim shonot, at the very least, in the realm of midrash halacha and midrash aggadah, there should be no repetition to no deliberate purpose.

There should therefore exist a systematic interpretation of every seemingly extra letter, word, and phrase in the Torah.

Many years back, I read a scholarly book (though cannot remember the name) about midrash halacha. The author asserted that, though Chazal attempted to make such a systematic interpretation across Torah, they did NOT succeed in this. That is, if you look through all of midrash halacha (of a work of midrash halacha) to see that every pasuk is accounted for, and every extra word, according to each opinion, you will find gaps that are really gaps.

Your question is then about one of these apparent gaps.

I don't know if Chazal interpreted the extra split into pesukim here. I believe that they do.

See Sifra on these pesukim, and particularly this quote:

That is, it seems to ask why state separately these three, in three separate statements. And if for the purpose of Tikkun HaMikra (unclear what it is -- HaLivni says it is ambiguous and is the only place found in Rabbinic literature), it is already stated (Devarim 14:7) הגמל והארנבת והשפן כי מעלה גרה המה. Rather, it is to include all the ribuyim we have stated.

So one should then learn through this Sifra carefully to deduce which ribuyim are accomplished specifically by splitting it up in this manner.

Edit: Also, I saw the following in a parsha sheet this Shabbos - which is what called me back to answer this question in the first place: 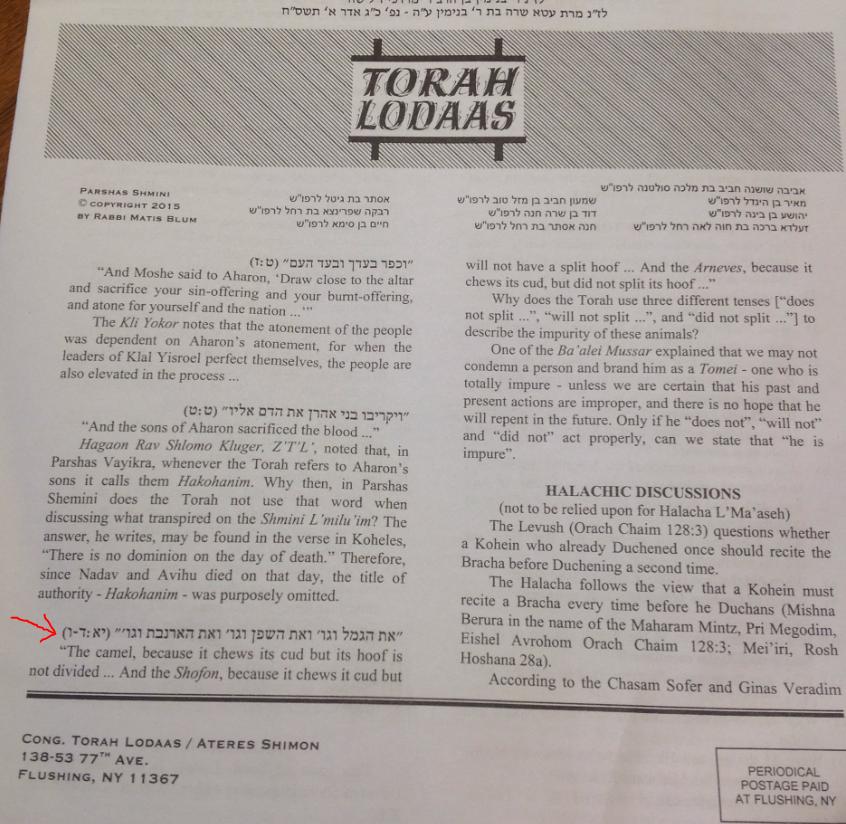 In Devarim they're listed the way you suggested, all in one posuk.

Daas Sofrim says (http://www.hebrewbooks.org/pdfpager.aspx?req=39783&st=&pgnum=169) that in Vayikra they're given each their own posuk to stress the issur because these animals were commonly eaten, and also because each one is on a different level in ruchnius (and Chazal say that each one represents one of the four kingdoms).

I am not an expert in hares and hyraxes but the camel's issue is foot related but the others are cud related. I think the hare has 2 types of poop. One which it re-eats and the final form. Presumably the hyrax does the same thing with barf. We need the other 2 to say that these activities don't count as cud chewing.

3
The Shafan and Arneves
1
Moshe and Klal Yisroel Separate
20
Is Pork, Camel, and the like Fleishig?
4
Are separate glasses required for milk and meat?
8
Understanding the Gemara and Ramban on the four one-siman animals
5
Why were Nadav and Avihu punished?
2
Why Fins and Scales?