The luxury of murex trunculus indigo

The Tekhelet Institute acknowledges that murex trunculus indigo is molecularly equivalent to plant-based indigo that was available in the ancient world for far cheaper (kala ilan). They reason that the gemara's test that failed kela ilan was not due to an inherent weakness to the fastness of the dye. If that is the case, do they (or anyone else) present an argument as to why ancient aristocrats (including outside the Jewish world) would not have just had quality batches of plant-based dye made rather than rely on the pointlessly (for non-halachik purposes) expensive murex dye? Isn't this a rather damning argument against the species being the chilazon? Or was this the ancient world's equivalent of DeBeer's getting everyone to buy worthless chips of carbon when they get married?

I don't know if they address this concern particularly in terms of the expense.

However, the knowledge that murex indigo is chemically identical to plant-based indigo is something knowable only in the 20th and 21st century, when we know about atoms, molecules, and chemicals. If plant-based indigo failed the gemara's test for fastness, and this was just a side-effect of the dyeing or production process, how can you assert that the ancient dyers knew this? It is at least as plausible that they did NOT believe that it was identical (other than having the same / similar color). They may well have believed that color-fastness or lack thereof was an intrinsic property of the snail / plant.

From some quick searching, here are people who make related points to what I wrote above. From The Chemical History of Color, page 66, about the variation in hue because it comes from an animal: 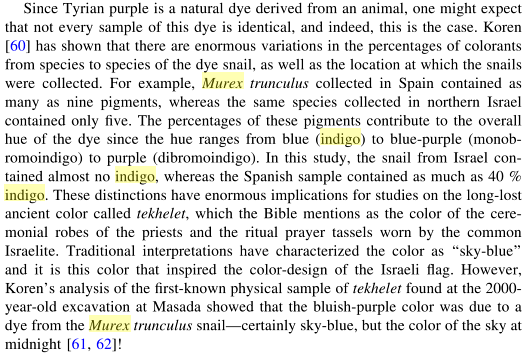 and from The Rarest Blue: The Remarkable Story of an Ancient Color Lost to History, page 230, about yet-to-be-understood reactions that involve the methods by which the ancients dyed: 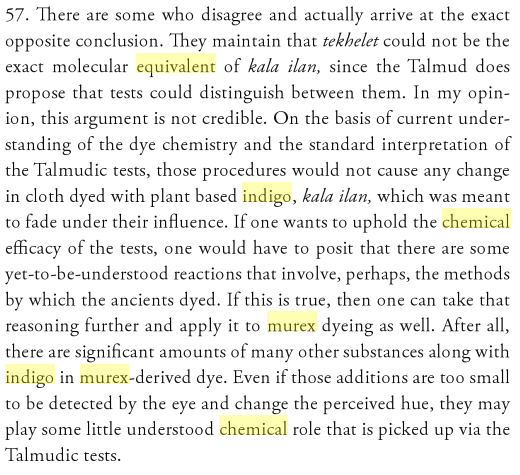 Not the answer you're looking for? Browse other questions tagged history science techeles archaeology .

5
How did the mesorah for techeles get lost?
14
What should our response be to ancient scripts that mirror the Torah?
5
Is there any support for the claim that tekhelet and argaman could be derived from the same creature?
0
Vegan tekheileth
8
Lubavitcher Rebbe on Techelet from Murex trunculus
1
Advantages/Disadvantages between Murex v.s. Radzyn Tekhelet
2
Archaeological findings of events in the Torah or Neviim Rishonim
2
Websites or books about the Torah and history of the world
7
How does the Motza Temple fit into our tradition?
7
Why aren't peas mentioned in the Tanach/Talmud?