Targum on Obadiah 1:3 a Reference to Rome?

The prophecy of Obadiah concerns the fate of Edom. Obadiah 1:3 reads,

The pride of thy heart hath beguiled thee, O thou that dwellest in the clefts of the rock, his habitation on high; that sayest in thy heart: 'Who shall bring me down to the ground?

That dwells in the teeth of a rock, ברוֹמא is his habitation

Note the voweling! I did not consider the word ברוּמא which would mean on high, because that is not the way the text is vowelized. The plain meaning of the verse leans this way, But Jonathan ben Uziel was not a strict translator. See for example earlier in verse 3 where he introduces the eagle/vulture simile when it doesn't occur in verse until verse 4.

What does ברוֹמא mean? I first read it plainly as in Rome, but then I encountered Jastrow, who brings down two options: in haughtiness or in Rome. Both seem to fit, if I'm not mistaken.

The word ברומא in the Targum to this pasuk means 'on high'.

As you write, Jastrow gives a few possibilities of translating that Aramaic word רומא, in the general case. It could mean "at a height", "haughty", or "Rome". 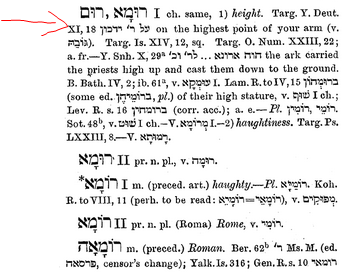 I wouldn't put much stock in the vocalization as shown in the link in the question, רוֹמא, because (a) that sort of vowel shift is easy for a copyist to change, and (b) 'haughty' and 'on high' are shades of meaning from the same root, so even if accurate, this would just be evidence of a roma meaning 'on high'. Assuming that this is the literal translation used consistently by Tg Yonatan, then moving to 'Roman' in one particular instance seems a stretch. Other places to look are מלכים ב פרק יט פסוק כ"ב פסוק כ"ג, ישעיהו פרק כב פסוק ט"ז, and so on. It appears approx 46 times and really the Targum for each should be checked

For a specific instance of the word רומא, we should consider the context. You have considered the context of this being sefer Ovadia, which is targeted at Esav / Edom and thus Rome. But you also intuited the context of זְדוֹן לִבְּךָ הִשִּׁיאֶךָ, "the pride of thy heart hath beguiled thee", which led you to the meaning of "haughty".

However, the proper context to which to pay heed is the Biblical Hebrew word this is translating, מְרוֹם. The root of this is רום, meaning height. And so the Aramaic translation uses the exact same root, of רום. And so it means, just as in your English translation, "his habitation on high".

Besides this immediate context, we should consider how Biblical Hebrew מרום is translated by Targum Yonatan throughout Tanach. For example, there is the word ממרום in II Shmuel 22:17, where from context it cannot mean Rome:

So, while this is indeed an interesting theory, I believe that a straightforward analysis results in the conclusion that the meaning is "height".

Not the answer you're looking for? Browse other questions tagged words targumin ovadya--book-of rome .

6
Targum to Ex. 32:27
3
Logic behind Targum of בא
2
Controversial commentaries from Targum Yonasan
3
Do Rome and Persia's kingdoms still exist?
4
Question on Targum Yonatan
0
When did Obadiah receive prophecy?