Heseiba (reclining) is a Rabbinic ordinance of the Passover seder intended to invoke the style of derech cherut ("the way of freedom" - associated with luxury/aristocracy). Some Rishonim (medieval Torah scholars) opine that other mitzvot of the night are not considered valid without heseiba (e.g. the biblical commandment of eating matzah is not considered fulfilled without a concurrent, halachikally-valid heseiba; see e.g. http://www.koltorah.org/ravj/13-28%20The%20Mitzvah%20of%20Heseiba.htm).

Heseiba as commonly practiced generally consists of leaning slightly to the left in one's upright chair. However, the historical act of leisurely reclining-while-eating in the ancient middle east was much more dramatically distinct, consisting of reclining to the left with one's length more closely parallel to the ground. 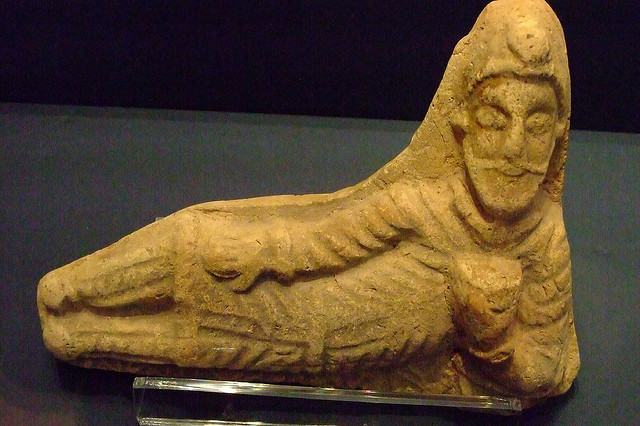 Rabbi Yosef Dov Soloveichik is quoted as having required leaning upon some object in order to qualify as heseiba. However, do any halachic authorities discuss the shiur of the incline of heseiba? Considering that the modern prevalent practice is considered, if anything, uncomfortable, is the issue at all discussed in the context of the actual ancient rite of reclining-while-dining whether leaning slightly to the left in an upright chair qualifies as heseiba?

(I myself try to use a second [folding] chair with a pillow/cushion to accomplish something more comfortable that more closely mimics the old custom. I was wondering if the issue is raised at all in halachik works.)

He answered that heseiba does not refer to awkward lateral leaning. He notes that he recounted that he saw a tapestry depicting heseiba and realized that the act refers not to awkward leaning, but to comfortable reclining.

He demonstrated how this can be performed without a couch; by leaning over, and supporting one's hand on one's head, with one's elbow on the table.

The implication is that the act is not defined by the number of degrees of inclination, but rather by the positioning relative to the table.

Not the answer you're looking for? Browse other questions tagged halacha passover-seder-hagada shiurim-measurements eating heseiba-leaning .

6
Is there a time limit for Borei Nefashos and Beracha Me'en Shalosh?
3
Why does the haggadah say to lean specifically to the left?
4
The Seder & diabetes
3
At the seder, unsupported mid-air leaning feels awkward. In reality, how should I recline?
5
when are the 'extras' (simanim) eaten at the seider, eggs and pomegranate?
5
Rav Belsky's illustration on how to lean by the seder
0
Why are we allowed to lean at the Passover Seder?
3
Reconciling the Rashbam's understanding for leaning left with the anatomy of the throat
1
Can one eat the marror from the keara over pesach?