The winged sun is an ancient symbol that originated in Egypt and Assyria. Why is it then that coins (or seals?) from Hezekiah have this symbol from gentile nations? Also Malachi 3:20 shows the adoption of this symbol. Edit: Also Zoroastrian Persia has this symbol. 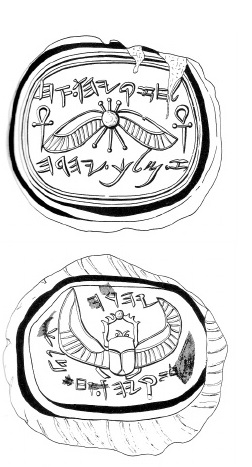 The text is in Paleo Hebrew. The top line of the first image says Chizkiyahu, and the bottom line of it says King [of] Yehudah. The bottom image has the tetragrammaton on top and Chizkiyahu King on the bottom. (h/t Aaron)

Frank Moore Cross's article from Biblical Archaeology Review from around the time they first recognized it as Hezekiah's is here: http://fontes.lstc.edu/~rklein/Documents/king_hezekiah.htm And here's a nice list with pictures of bulla with some Biblical personages there, like Gedaliah: http://www.specialtyinterests.net/seal_impressions_ostracon.html . (h/t Gary)

In Ancient Egypt the winged sun or Winged Disk it started probably as a Divine symbol , but later it became a Royal symbol , it meant the king him self and it was used by many ancient cultures worldwide ( with different meanings you can find it in bassicly in all civilizations of those days with all sorts of diferent meanings ).

As one of the most well renowned and respected Egyptologists Sir Alan Gardiner, who argued that the disk represented the ‘actual person’ of the of the king, (Dictionary of Ancient Egypt. Shaw & Nicholson, 2002, p305)

In the begging Jewish seals had no drawings at all, later you find many of them with drawings with the symbol of their respected family:

Like the famous Yerovam Seal with a lion Or others with a boat or animals or flower etc..

The other Seal with the Beetle and the wings , it was the official Symbol of the Kingdom of Egypt in those days who Chizkiyahu was alied and was rebuked by Isaiah for doing so and trusting that they would come and help him against Sennacherib

As you cans see that Isaiah calls Egypt as "land of the beetle with wings" (Isaiah 18:1) and you can find in many places in Egypt these Symbol as the Symbol of the Kingdom of Egypt of those times

Therefore Chizkiyahu he probably used this Seal to Celebrate the Aliance with Egypt or to show trust etc.. With no Idol intentions

The specific significance of the winged sun / scarab motif has been debated, with Robert Deutsch claiming that:

"by the eighth and seventh centuries BCE, when they appeared on Hebrew seals, they were already quite old and bereft of any religious significance. They were used solely for their decorative value and their connotation of power and should be regarded as Israelite/Judahite."

While other researches such as Glen Taylor have suggested that the motif symbolises the Egyptian sun god Khepri, connecting this to the many passages in the Bible ascribing sun-like properties to god, as well as warnings from the later prophets regarding widespread sun worship.[1][2]

Keep in mind, that although the impression one gets from the Bible is that monotheism was practised (at least by the "righteous" kings), as an unchanging religion where idols and visual symbols of god were strictly prohibited, a critical view will suggest that this was not necessary the case at the time of Hezekiah.

The first thing I noticed when I saw a picture of the original seal (example) is the left wing covering a bit of the sun, which avoids (page 112) the prohibition to draw celestial bodies. If it was done intentionally, this would be strong evidence that, whatever his reasons for using the sun with wings, Chizkiyahu was careful to avoid halachic problems and definitely didn't use the symbol for the the purpose of idolatry.

I'm not sure why the reconstructed image of the seal removes this feature.

My view is simple on this, but as the findings are progressing, and we have more data on the ancient world, the views of Zechariah Sitchin seems to be more and more validated. The image of the disk with wings, and many cases the disc has a man as riding it, it is not the case here, because perhaps ancient Judaism was less iconographic then the other peoples from that time, but the idea still very much the same.

Not the answer you're looking for?Browse other questions tagged history money .

7
Best way to destroy (maaser sheni) coins
10
How were coins that were destined for the Dead Sea managed?
6
Depiction of the Menorah, the *Shulchan* and *Kadosh HaKadoshim* on ancient coins?
1
Is land ownership traditionally considered a status symbol in Judaism?
8
When making bank deposits, does one have to filter out foreign coins if the bank itself doesn't?
1
How do references to eternity in Torah square with the finite life of the sun?