How should a werewolf celebrate Pesach? [closed]

Werewolves are known for their transformation at the full moon. Unfortunately, for Jewish werewolves, this poses problems with holidays such as Pesach, Sukkot, (Shushan Purim, Pesach Sheini, Tu Bishvat, and Tu B'Av), all of which fall on the night of the full moon.

How should a werewolf observe Pesach, at the very least, while in wolf state?

For bonus points, you can explain the other holidays as well.

I've heard conflicting rumors about the characteristics of werewolves. For purposes of this question I'm going to go with the common modern-day interpretation: a werewolf undergoes involuntary transformation into wolf form at the full moon, losing most of its human instincts, and typically hunts and gorges on something before returning to human form in the morning with few if any memories. If you had some other kind of werewolf in mind, you should specify.

All of these holidays will pose problems for our werewolf because the full moon rises at sunset, which is before festivities can be concluded (or in some cases even started), but his transformation into wolf form commences with the appearance of the full moon. If you follow the minority opinion that it's the sight of the full moon that does it then you might be able to prevent transformation for a time, but the majority seem to hold that the transformation happens at moonrise with or without consent.

One possibility is that he's not obligated in mitzvot while in wolf form (because only human Jews are obligated). If he is obligated, though, he's going to face some challenges:

Pesach: First off, you're asking a ravenous wolf to sit quietly for the reading of the haggadah and ensuing discussion before we get to the meal? And that's assuming that either he retains his opposable thumbs or has a helper to assist him with the haggadah and the ritual food items. Naturally he's going to have trouble saying "matzah", "maror", and "Pesach", because lupine vocal cords are different, calling into question whether he even fulfills his seder obligation. We might look here to the laws of the mute for guidance.

It is possible that the wolf gains special status to offset these difficulties, because a wolf is a dog and the dogs were rewarded during the exodus.

Sukkot: Spending all night outdoors under the stars? He'll be all over that. It would be a kindness to put a doggie bed in the sukkah. By morning he should return to human form, so lulav will not be a problem.

Tu Bishvat: Wolves are obligate carnivores. A meal of fruit and nuts is not going to cut it. Since the Tu Bishvat seder is minhag and not halacha anyway, he should just skip it.

Finally, rumor has it that werewolves take damage from silver, so just to be safe, he should make sure that any kiddush cup he touches is not silver. Because "baruch atah owww!" does not contribute to sanctification of the day.

Listen. Repeat after me. Flowers were never included in the decree of kitniyot. The people who keep telling you that aconite is inherently not kosher for Passover say so with no basis. For crying out loud, does this look like a grain to you? A bean? 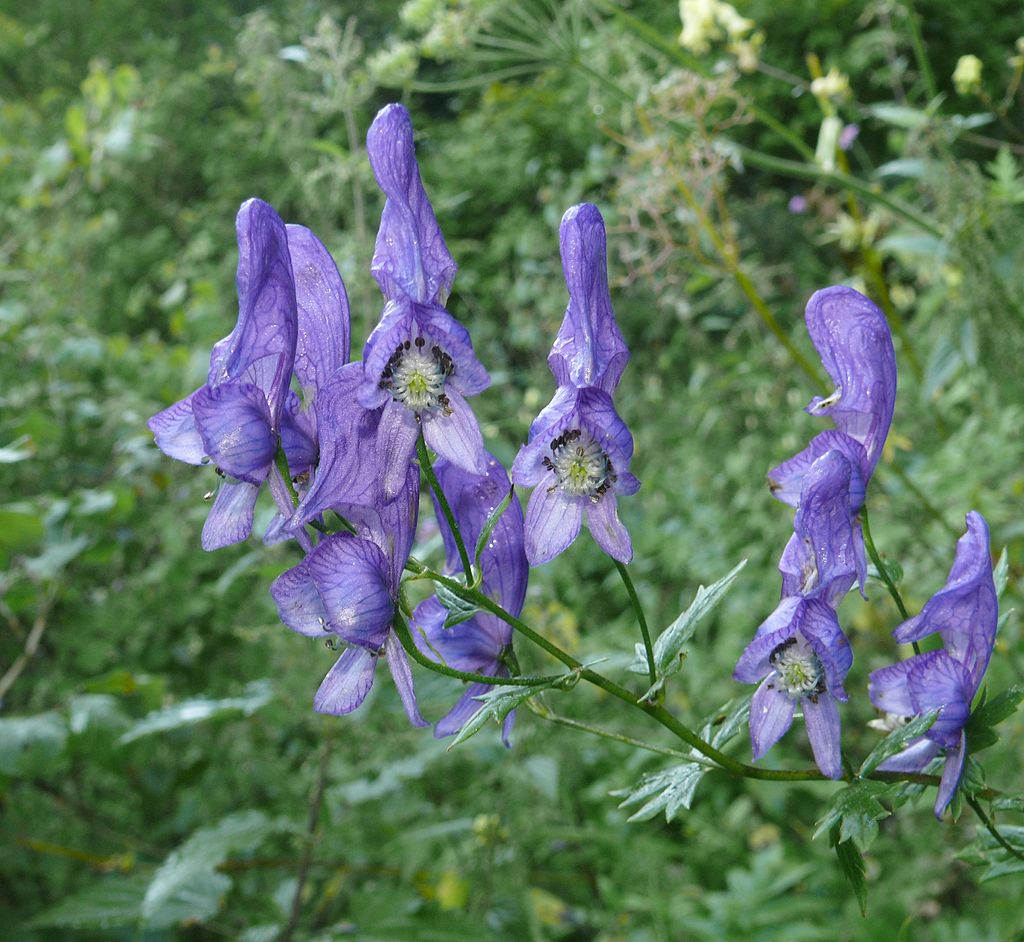 Picture by Bernd Haynold with Dual License GFDL and CC-by-sa, found on Wikipedia

Now, yes, some of the aconite fields in Switzerland are next to wheat fields, so there is some basis for worrying about cross-contamination. And, of course, even though it's a medicine, you might want to make sure that the other ingredients of your Wolfsbane Potion as well as the flasks it's concocted in are all kosher for Passover.

Fortunately, the London Beth Din now certifies a limited run of kosher for Passover Bissele brand "Benny's Bane Potion." It tastes like cardboard, but it has a funny cartoon of a kippah-clad werewolf-boy with a "yummy in my tummy" look on his face, and most importantly, it's 100% effective. 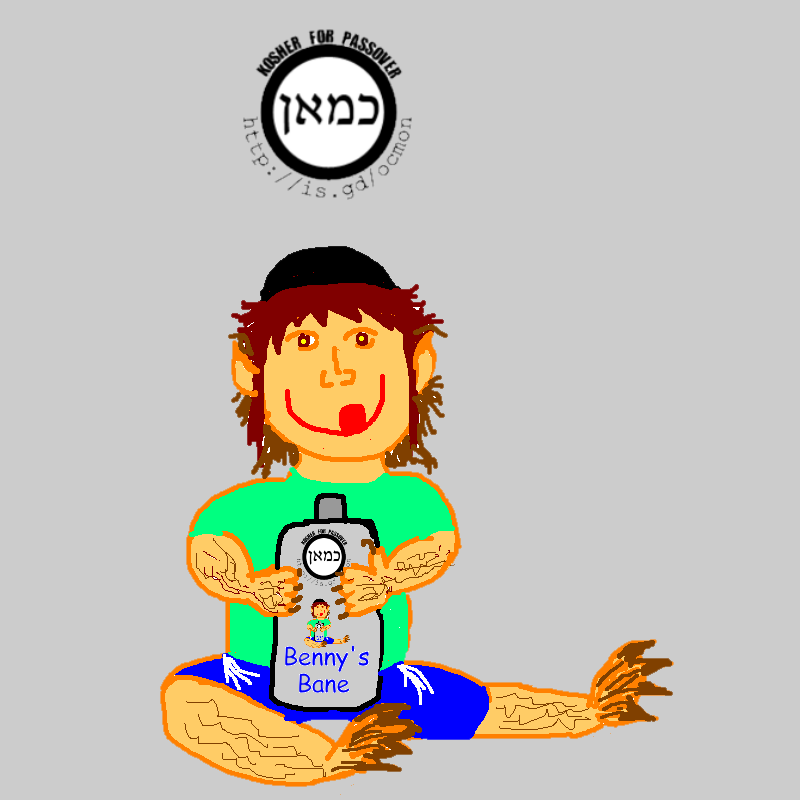 So, buy some Benny's Bane, drink up, and enjoy the holiday with your friends and family.

I will primarily address Pesach, as it is both the most pressing and the most complicated of the holidays in this circumstance.

As mentioned by others, there is no possible exemption for sukkos, since his free half is obligated to be outside and his enslaved half prefers it outside. He must be careful, however, to eat any food he has killed that evening while sitting in the sukkah.

The other yomim tovim represent no peril, as they occur at other times of the month.

Since the person in question is simultaneously half-wolf and half-man at the point of transformation, we may point to another halachic half-man in the middle of a transformation - A chatzi-eved/chatzi-ben chorin. As half free, he has an obligation to observe all the mitzvos of bal yira'eh and chametz, but eating the korban pesach is a special exception.

Chazal say (Pesachim 88) that an eved with two masters may not eat from the Korban Pesach from either one. This is because each half is makpid on his ownership of the slave, and this precludes the other half from being yotzei with the other's korban (rashi and tosfos, ibid.) This is extended to one who is only a chatzi eved - the portion owned by the master prevents the freeman from bringing his own korban.

Now, a person subject to lycanthropy is enslaved to his inner animal nature (Rav Jekyll - which is actually a corruption of Yechezkel), and since an animal is not considered to have das, we cannot arrange with the animal to release him as an eved into a status of a full freeman. This would imply that the werewolf is in fact pattur, and cannot even eat the pesach lechatchillah, during his transformation.

However, since he is a completely free man at the moment of the chiyuv of bringing the korban, he still must go to Yirushalayim on the 14th to have it brought. Additionally, we must be choshesh for the shittah that the korban pesach may be eaten until amud hashachar! If a werewolf finds himself released back into human form due to clouds covering the moon or any other method before amud hashachar, then he must eat at least a kezayis of the korban without a bracha (Safek lehakel).

As always, special care must be taken that, in his enthusiasm, he not eat it raw.

As a wolf he is exempt from all mitzvos including cooking, cleaning, and eating matza. He should use this opportunity to learn Ketzos in the bathroom.

Wolves eat lambs. They need to be careful when eating korban pesach that they roast it first and do not break any bones.

They need to eat it before midnight, not leave any over but if anything is left over it must be burnt.

24
What's up with this strange new hechsher?
17
Werewolf in the Torah
6
Matzah and Maror: With Garlic?
2
Is Marijuana Kittnos