What's the reason behind having an additional atara on the middle of the talis gadol?

Here an example of the Belz Rebbe talis with an additional atara in the middle Any sources on this custom ? 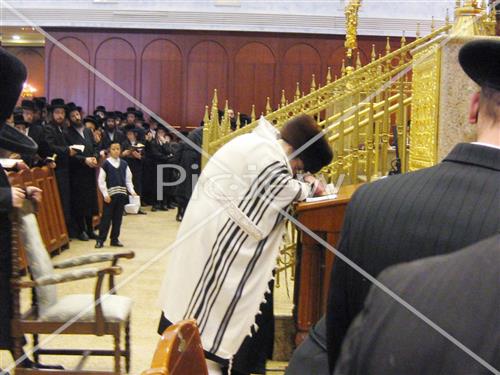 This is an attempt to mitigate the issue of giving undue importance to the part of the cloth that covers the head. There is an old argument if one needs to be careful to always have the taalis on the same direction. Origionaly, a cloth was sewn on the inside to mark which way is up. Eventually it made it's way to the outside, even becoming silver. This presented an interesting problem as now it seems that main point of the taalis is an atifa for the head, which is not how we rule. We rule that the main atifa is on the body. An attemt to limit this perception was to sew a piece down the middle of the taalis. See the Aruch Hashulchan in siman 8 siff 10 where he discusses this approach as pertains to a silver atara and strip.

Not the answer you're looking for? Browse other questions tagged minhag tallit-gadol .

3
Why is the atara on a tallis always the same design?
7
tying tzitzis together on Simchas Tora
11
Why do some women light additional shabbat candles for the past weeks they didn't light?
8
Why do Lubavitchers fold their talisos under, on the shoulders?
2
Who wears a talis on leil Shabbos?
1
Why does the leader wear a talis on the first night of s'lichos in a Chabad synagogue?
7
Why follow a rebbe's every custom?