What is the source not to eat the endpiece of the challah?

At the shabbos meal, why do some people (such as Yodeyan NBZ) not eat the end piece of the challah? Some people don't even just start at the middle, they avoid the end-piece altogether.

Taamei Haminhagim - page 77 - #176 *note on bottom giving a Kabalistic reason, says that it is to be Mevatel tho Koach of the Chitzonim. It seems from his wording that if you take off a small piece of it, you can eat the rest of it.

In the sefer Shmiras Haguf Vehanefesh (31:4) by Rav Yitzchok Lerner, Rav Chaim Kanievsky is quoted saying that there is no source for this in the tradional Jewish literature, but if this is ones family minhag he should not change it. See Orchos Rabbeinu 3 page 104, 23 who says that the Steipler zt"l did not eat the end peice.

Personally, I have heard from Rav Moshe Heineman of Baltimore and head of the Star K kosher organization, that he as a student in the Lakewood Yeshiva studied under Rav Ahron Kotler, and observed that Rav Ahron at the shabbos seuda in yeshiva would take specially the end peices of the challah, Rav Moshe Heineman asked Rav Ahron about the minhag not to eat the end pieces Rav Ahron waved him off and said "there is no such source anywhere in shas or the poskim". Rav Ahron remarked that the end pieces were his favorite part of the challah. (See picture below featuring Rabbi Heinemans story printed in The Fire of Torah page 170) 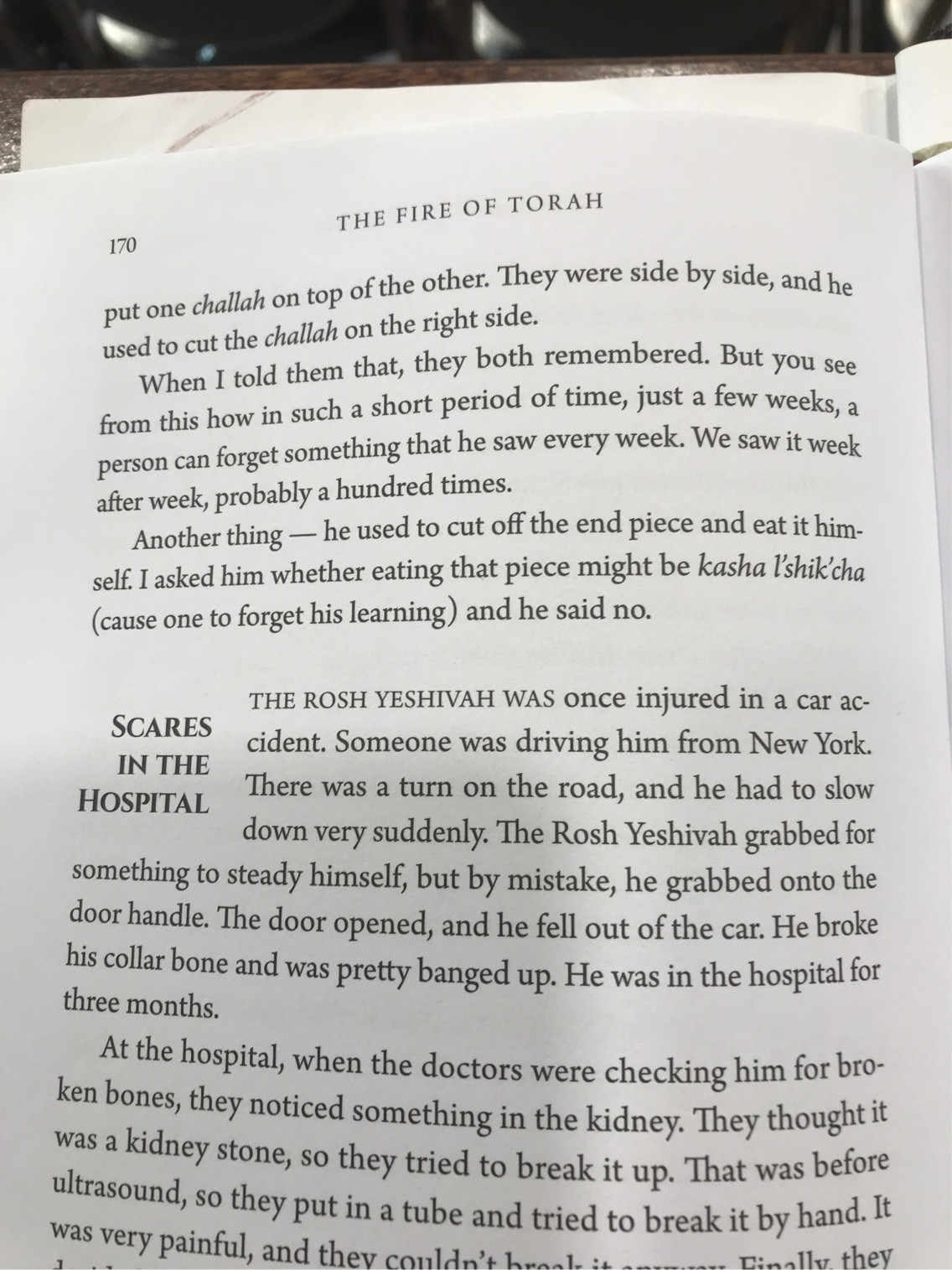 In our house (and also growing up) the end piece was left over because people like the softer middle slices of the challah (also, sliced rye). (Which reminds me, l'havdil, of the Rav Moshe story where he was asked about his custom to hunch - he had trouble standing straight.)

I always thought that people didn't not eat the end piece as much as they did eat the rest of the challah. What I mean is that there is an inyan to eat the 'prusas hamotzi' i.e. the peiece of bread that hamotzi is said on and then eaten from. If a person says hamotzi and then cuts off a piece and eats from the rest, then you end up with a lot of bread that's considered prusas hamotzi and everyone can eat from it.

Loewian was right in his answer, but it can be fleshed out a lot more.

People tend not to like the heel of the loaf because it is almost all crust, which doesn't taste as good. This is the most likely reason for avoiding eating it. However, just as nature abhors a vacuum, a common practice begs for explanations for practices. And those explanations, once established, influence further behavior.

These explanations can be practical. E.g. I've seen people suggest this prevents the bread from getting moldy, or stale, as quickly.

These explanations can be superstitious. Thus, for a pregnant woman, if she avoids the heel it will be a girl, while if she goes straight for the heel it is a boy.

They can be mitzvah-oriented or kabbalistic. Thus, some of these other answers.

The effect of an invented kabbalistic or mitzvah-oriented explanation is two-fold:

As others noted, Minchas Yitzchak, Rav Kanievsky, and Rav Aharon Kotler all stated that there is no source for this minhag. In light of this, it is not insulting to suggest that this arose from an extremely common, non-Jewish practice. This is not chukat hagoyim since there are good practical reasons for it, just as using an umbrella when it rains is neither a minhag nor chukkat hagoyim. And that certain tweaks where people insist on behavior arose from either the belief it is a minhag (and thus encrusting a particular way of performing it) or from offered ex-post-facto explanations of the practice.

The Minchas Yitzchok writes in a responsa chelek 9:Siman 8:7 that he has this tradition, but that he couldn't find a source for it.

If he practiced it and tried to source it but couldn't, I would assume there is no real source.

Theories to backwards engineer a reason would be a different story though. I myself might post my own Rabbi approved theory at some point.

The Taamei ha'Minhagim also suggests the reason is bakers used to stick down the end of the challah with saliva so it was a health-risk to eat the ends.

Among the guidelines of proper conduct is not to cut off a [very] small piece of bread, because then one appears miserly. Nor, should he cut off too large a slice, i.e., one larger than an egg, during the week, because then he appears like a glutton. On Shabbos, however, it is a mitzvah to cut off a large piece, sufficient to last throughout the entire meal. One need not be concerned about [appearing] gluttonous, as explained in sec. 274[:3].
All the above applies when one eats alone. If one eats together with the members of his household or with guests, ...

Talmud Brochos 39b and Shabbos 117b

Rabbi Zeira would break off one large piece from the loaf, and eat from it for the entire Shabbat meal.

I grew up with the tradition that my mother ate the end piece of the challa. We were told that it was a segula for fertility, but maybe the link to the women's mitzva of hafrashas challa is closer to the truth.

Not the answer you're looking for? Browse other questions tagged minhag shabbat challah-shabbat-bread .

4
Shalosh Seudos song - B'Vo'o M'Edom/Yetzave Tzur Chasdo
6
Not eating from the Lechem Mishnah, rather from the incomplete bread
6
How much must be eaten from the lechem mishneh
7
Cutting Challah on Shabbos
4
3 meals on shabbat?
5
Why are huge challot displayed on the wedding couple / Bar Mitzvah's table?