What blessing(s) to make on milk's favorite cookie (Oreo's)?

Should one make a mezonos? Shehakol? Both? Would it make a difference if the cookie were to be pulled apart, and the components eaten separately? 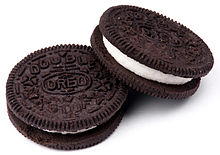 In the case of those you just make one b'racha, "mezonot".

If you have a strange eating habit of opening it and spooning out the sugary part in the middle and eating it alone, you would make shehakol on that. You should not probably intentionally eat it this way just to make an extra bracha.

I must admit that this is a bit of a draft as I'm completely working off memory. But, I'll take a bite at it ;-) and hopefully come back later with a more authoritative edit... (And of course, you should not be relying on this answer either way for Halacha).

Firstly, we have to figure out what type of Ikar V'tafel this is. [for a quick recap: the 3 types in short are 1) absolute 2) enhancers 3) mixtures]. I took a quick Google around and it seems like the cream is added after the cookie part is baked. This would therefore appear to not be a case of a mixture, which would make it the type of Ikar V'tafel that is "enhancers" (similar to a cracker with tuna).

However, I'm not 100% sure about this. Naturally, if this assumption is false, the entirety of this answer would fall off...

For example, I would say that for me the cream is enhancing the cookie. I really want to eat a cookie, but without the cream it would be pretty bland and dry. However, I could imagine that there are others out there (as you allude to in your question) that think otherwise.

Once that's determined, we get to the Halacha part. Because the cookie is Mezonos (and is used in a significant way) it gets a bracha either way. So:

All of the above applies to the case where the cookie is eaten as it is sold. However, if you were to go ahead and separate it, both components would require their own separate bracha. This is once again true due to the underlying assumption that this is a "enhancing" type Ikar V'tafel (if it would be a mixture, it would be a Machlokes if you separate it, IIRC)

Not the answer you're looking for? Browse other questions tagged halacha blessing food mezonot-beracha shehakol-beracha .

13
Berachos over food mixtures
15
What is the bracha on “cookies and cream” flavor ice cream?
2
Status of plastic drip coffee filter cone
2
Should I only make one Berachah, or should I make one on each different food?
2
What blessing to make on a cronut?
9
Serving food at Kiruv Events and OC 169:2
8
What is the bracha on “Kit Kat” bars?
2
Putting Oreos in your Cholent
3
Should one make a blessing when smelling fruit / vegetable vapors?
4
Crackers - Why wouldn't that require an Hamotzi?