What is Shiduch? (I heard it also is called the market)

Can you make the Shiduch the day of the wedding?

How/when can you make it?

What does market mean?

What is bad to marry in the market?

Jastrow translates "שידוך" as a "preliminary negotiations" to betrothal (אירוסין). 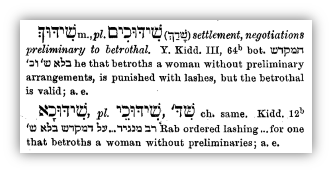 He also cites Kiddushin 12b as the source for his defintion; there, the gemara discusses the case cited in your שלחן ערוך. (he also cites Yerushalmi Kiddushin, which also discusses this case)

I heard it also is called the market

As for "I heard it also is called the market," that refers to a different type of "shidduchim," like Shalom pointed out, that in today's vernacular, boys and girls who are dating for marriage are referred to as being "in shidduchim," "in the parshah" (i.e., up to "that stage" of life), or as "on the market," available to date. I'm personally not really a fan of that last one, as it carries with it the implication that dating and marriage isn't really being treated with the seriousness that it deserves, but that's what people say.

This type of "on the market" is not related to the שוק of your שלחן ערוך, which is an example given of someone who entered marriage "on the spot," without proper consideration; here, ironically, "the market" implies the lack of shidduchim.

Rashi on that gemara writes

Rav would administer lashes etc. - because it's not proper (because of פריצות)

This, I believe, is intended to explain all of the reasons that Rav would administer lashes -- among them the מקדש בשוקא (someone who married a woman in the shuk/marketplace), as well as the מקדש בלא שידוכי (someone who got married without shidduchim).

Shiduch means a discussion concerning marriage. The mashal my rebbi told me about this was where do you want to live what do you do etc. Basic dating conversation, nothing special really. The flip side is seeing a woman on the street and without saying two words to her first, proposing. How decent does that sound? Does it sound like anything more than pure lust?

The marketplace is just a mashal for an open, public place. In America we would say in the street, like in the example I gave.

Okay, a couple of things going on here.

"Shidduchim" translates as "courtship", i.e. dating someone and getting to know them before marrying them. A shadchan is a matchmaker.

We say a person is "in shidduchim" or "holding by shidduchim" if they're at the point in life that they're looking to meet someone to marry. You could say: "Sara is looking to find a husband"; "Sara is in shidduchim"; or less nicely, "she's on the market" (i.e. viewing it as a "marketplace" of men and women looking to marry.)

The Talmud is simply saying we don't just go get married out of the blue. To get married "in the market" (like the old open-air markets) means out in the middle of the street -- go find a building! The same thing if you just met the lady five minutes ago and now you run off to marry her -- that's not how we do it!

it seems to me

The Talmudic sages mandated an engagement period before marriage. Marrying without engagement cheapens the institution of marriage, for it gives the impression that matrimony is an impulse decision, one which doesn't require much thought or preparation.

that they understand the tnoyim as the shidduchim

Te’naim—conditions—is the popular term for the shidukhin, a mutual agreement between two sets of parents for the date and financial conditions of the forthcoming marriage of their children.

In the times of the Mishnah at the beginnings of the Common Era, betrothal was preceded by the shidukhin, which then was an informally negotiated agreement. The third century authority, Rav, used the following formula: "How much do you give your son? So much and so much. How much do you give your daughter? So much and so much." Whereupon, they proceeded to carry out the betrothal.

The shidukhin was a necessary preliminary to the marriage that gave both families the opportunity to arrange for the material welfare of their children’s union. It also served to discourage hurried and haphazardly arranged weddings, which could make a mockery of marriage and vulgarize the entire institution. This was so important that Rav, with the concurrence of his colleague Samuel, ordered corporal punishment for anyone who did not take the trouble to make these preparations. By the fifth century the orally-negotiated agreements, while still not formalized and reduced to writing, were entered into with such concern and sincerity that although they were only words they were nonetheless binding and considered promises, de’varim ha-niknin be’amirah (matters that are "acquired" by words).

When the betrothal and the nuptials were combined into one ceremony in the eleventh century, there arose an even greater need for preliminary family negotiations, similar to the western concept of "engagement." The agreements were now reduced to writing, and a ceremony was developed that gave it an official character and was enforced through bans and edicts. Breaking the negotiated promises was considered legally objectionable and morally reprehensible.

Standard forms were developed by Sephardim in the eleventh century, and Ashkenazim in the twelfth century. The written document was called te-nai shidukhin (conditions of the engagement) and subsequently te’naim (conditions). They were considered te’naim rishonim (first conditional agreements), while the ketubah was referred to as te’naim acharonim (last conditional agreements). Included in these conditions were all or some of the following items: date; place; dowry; financial obligations of both sets of parents to their children; clauses assuring the efforts of the groom’s father to have his sons provide chalitzah in case the groom died before bearing children; inheritance rights; and penalties for failure to comply with the conditions. The Rabbis strongly disapproved of young men who broke engagements because of dowry disputes, and considered repugnant those who diminished their duties within marriage be-cause of in-law defaults.

Not the answer you're looking for? Browse other questions tagged halacha shidduchim-dating .

13
Did shadchanim suggest the shidduch?
4
Why חלפות (=malei) and then חלפת (=chaser)?
4
If a shidduch says “no” to you, does that mean that they are not your zivug?

8
What do you say when asked Shidduch information
5
What are important topics to discuss before marriage?
4
What to look for when going on shidduchim?
2
What is the meaning and origin of the term “in the parsha” with regard to someone who is looking for a shidduch?
3
What is the procedure for a Shiduch inside the Satmar community?
5
What are good quality sites for Shidduchim
10
What does a marriage proposal look like?
3
You're on a date in a park in the evening, what should you avoid to ensure the proper yichud rules are addressed?
6
What is the proper protocol for breaking a shidduch?