Danny Schoemmann mentions a ceremony called a chol-kreisch in this answer for giving the secular name of a child. Is this custom still observed, and if so, how is it practiced?

On that Shabbos when the mother of the new born goes to synagogue, a "Chol Kreisch"is made for the child. On the day of the miloh the child acquired his Jewish name by which he will be called to the Torah and on this Shabbos he is given his secular name. For example Yitzchok (will be called) Itzik; Eliezer, Leizer; Alexander, Sender; Mordechai, Mottel; Yechezkel, Chizki. There are those who do not give a secular name but repeat the Jewish name to make known that this is the name by which the child will be known in his secular life.

This is the order of the chol kreisch. After the Shabbos meal, children under barmitzvah come to the house of the new born. The baby is clothed in the same clothes that he wore to his circumcision and the cot is decorated and the child is covered with a tallis with tzitzis and a Chumash Vayikro is placed near him. The children sit round the table or stand round the cot and say the pesukim for chol kreisch as printed in the Avodas Yisroel and Sefas Emes siddurim. After saying the pessukim the children lift the cot and say aloud “Chol Kreisch, Chol Kreisch. What will the child be called Ploni, Ploni, Ploni” and they repeat this three times. Before the children leave they are given a bag of fruit, nuts and nosh. Girls also have a chol kreisch but they do not say the pessukim nor put the chumash in the cot.

Our Rov, Harav Yehudoh Gans Shlito, made a Chol Kreisch for his newborn son (Yosef) on שמחת תורה saying all the Pesukim as they appear in the Rodelheim Siddur, and he stated at this event, that it is a very old Minhog, which is brought already in the Seifer Chassidim.

The Nussach in question is the following: 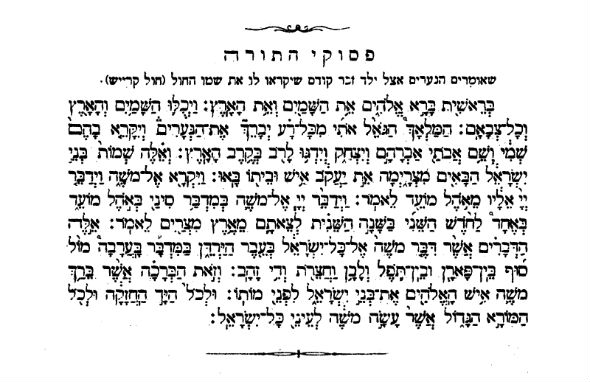 My family origins are in Alsace and various places in Germany, which are places where the minhag was practiced historically. I have a 10 month old son, and I made a chol kreisch for him. I did it as it says in the Rodelheim siddur.

These "street names" seem to have entered the "full" shem kodesh whenever Jews gave the names in lands where the "street name" no longer made sense, since German wasn't spoken in those places, such as Russia or Poland. Even still, while some people may be called to the Torah as Yehudah Leib, for instance, others will be called it only as a nickname. I have two friends named Leibish, one is called "Aryeh Leibish" fully, and the other is named Aryeh Yehudah, and goes by Leibish. While many might call it a "Jewish name", the fact is that Leibish originated as the German version of Hebrew names connected to "lion".

When I did my son's chol kreisch, I didn't say the name as it appears on his birth certificate, but the name that we call him, which is the "nickname" for his name. This is a bit funny, as he is named after my wife's side, and has a double barreled name that includes the old German-Yiddish "street name" in his shem kodesh.

Not the answer you're looking for? Browse other questions tagged minhag names ashkenazi .

28
Am I allowed to give my kid a non-Hebrew (non-Jewish?) name?
2
Dropping a Vernacular Name

8
Wrapping up Tefilin to form dove's wings
1
Giving a child the same name as a living distant relative
3
Minhagim for removing tefilin on chol hamoed
0
Do you have to have a dead relative named Alexander to name your child Alexander?
3
What is the origin of the Yeke custom of washing hands before kiddush and is it done only by the person saying kiddush or everyone?
1
Name giving ceremony
0
Any issue in using a different name than given at brit mila?