Confused on Nahor and Haran

In Genesis 11, we are shown that Abram, Nahor, and Haran are brothers. Haran dies in Ur.

Then, Abram and other family members travel now to a city called Haran (a bit confusing, but okay. Did they found the city and name it after the deceased brother or something?). No mention of Nahor and what happened to him.

Then, Genesis 24, Abraham wants to find a wife for his son from his hometown. Where is his hometown? Is it Ur (where his father is from) or Haran (which is where the family spent some time)?

Then, a servant goes out and makes his way to the "town of Nahor." Where is that?

I looked on Google for all sorts of map but I can't find a city called "Nahor." I found one map with a colored line describing the travels of the servant and it ends in the city of Haran. So is "town of Nahor" = "Haran " = "Abraham's hometown"? I am so confused. 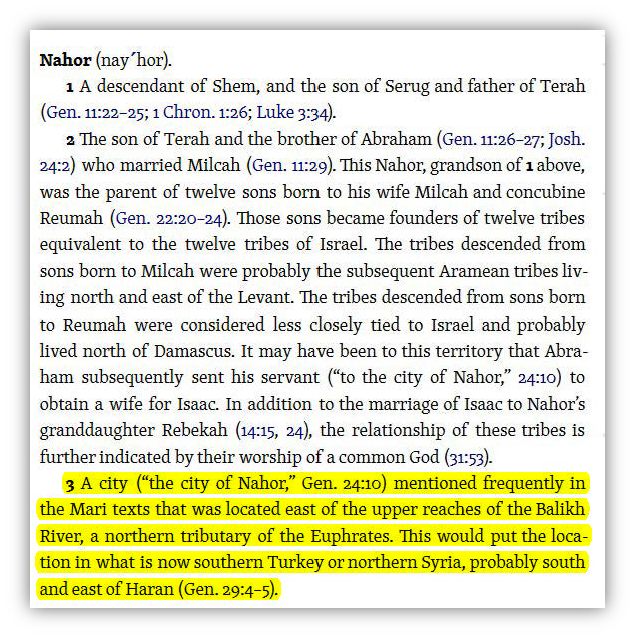 Not the answer you're looking for? Browse other questions tagged names geography parashat-noach abraham cities .

8
Where can I find Prenumeraten/Prenumeranten?
7
What effect did Migdal Bavel have on world languages?
11
Did Abraham know that Lot Survived the Destruction of Sodom and Gomorrah?
8
Hashem's inconsistent responses about Sedom
4
Prayer for individual tzadikim in Sodom
2
What is the etymology of the name Jesse?
7
Alternative version of Tower of Babel story