How Do You Conceal The Blue Stripes of the Small Tallis Under Your Shirt?

A friend of mine got me tzizit (on a small wool tallis) to wear every day under my shirt. It has dark blue stripes that show straight through my shirt. I wore a vest to cover it up but I'm wondering what do folks normally do? Should I buy a different small tallis without the blue lines? Do you just wear a t-shirt over it? Most people wear white shirts so it will show through, those dark stripes. Thanks!

I sense some confusion on you part. The mitzvah of tzitzit comes from Numbers 15:37-41. The only thing that is "blue" about the tzitzit is one of the threads that hangs from the others knotted on the four corners. I put the word "blue" in quotes because the Hebrew text tells us that the color of the string was to be תְכֵלֶת which is a very specific shade of blue for which the recipe for making the color was long ago lost and recently claimed by some to have been rediscovered. Since not everyone agrees with that, you'll find some people where תְכֵלֶת strings on their tallis and tallis katan, and many who don't. See the discussion of this topic here. So the requirement to wear "blue" on our tallis or tallis katan (the one under our garments) is a question as to what is on the corner strings, not on the garment itself.

There are different customs to wearing a tallis katan -- many non-Hassidic Jews wear ones that are plain white like this:

and some people wear them with decorative black stripes, not caring that it shows through their shirts:

Finally, I know people, mostly Hassidim, who wear a wool black-striped tallis katan, with decorative fringes at the bottom, like this one:

or like the one that Zero Mostel wore when he did Fiddler On the Roof: 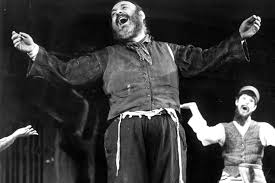 As for the color of the stripes, I've never seen a tallis katan with stripes of any color other than black or white (then the white stripe is a different fabric from the rest of the garment), although many tallisim I've seen have been of many colors.

I haven't worn this type of tallit kattan myself. If I recall, the stripes on some of these tallitot are on one side only, or they're not as pronounced on one side. If so, wear it so that the "faded" side faces out; That may help. Otherwise, unless you are specific that you must wear only white shirts, wear a dark one. If you must wear only white, then, the only solution I can think of is to wear an extra layer (white undershirt, etc.) under your dress shirt.

From @NBZ's comment about וּרְאִיתֶם אֹתוֹ "and you shall see it", this refers to the strings, not the beged - garment part or the stripes on the garment.

Very simple: Sow on a white piece of cloth to cover up the dark stripes. This is not problematic at all. In fact the corners are likely already reinforced with cotton squares. Just make sure that neither the patch, nor the thread used to sow it on, contain any linen whatsoever.

Not the answer you're looking for? Browse other questions tagged clothing tzitzis how-to color .

25
How do you maximize your aravot's period of freshness?
9
How do you pick a Hagada to use at the Seder?
31
Men: how do you control your reactions to women in immodest dress if you can't avoid them?
8
Blue Stripes on Tallis
4
How much can you wipe your muddy shoes on a doormat on Shabbos?