Why is the first occurence of the word "חלפות" written מלא (with the ו), and the second written חסר (without)? Why would the wording change in the middle of a verse like that?

When it's chaser it means the objects are similar like by the luchos. The Shevatim are diffrent sizes but Binyamin got 5 of the same size since it was only for him . (Torah Temimah)

An answer is proposed in the sefer שעשועי על התורה, on this week's parshah.

Now it makes sense -- the חלפות that the brothers got are spelled מלא, because those were regular clothes, while the clothes that Binyamin got were of inferior quality, and hence are only חלפת, without the ו.

The correct spelling of the word is חֲלִיפֹות, which is found in 1 Melachim 14:13.

The Masoretic Text in Bereishit 45:22 therefore indicates in the margin (the “small Masorah”) that the two appearances of this word in this particular verse are variants (since the Hebrew Bible was written over a thousand year period).

In other words, in Biblical Hebrew variants are not uncommon with regard to the yod and vav, since they are the Matres Lectionis of Biblical Hebrew. Please note that the superscript 24 occurs in both notes, and points to the footnotes at the bottom of the page, which reference List 336 (the “large Masorah”), which Weil (2001) references as follows. The same Aramaic terms appear here as well. 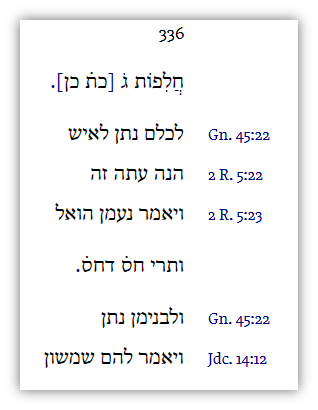 These references here provide no implied meanings for interpreting Bereishit 45:22 (based in the Aramaic notes), but do acknowledge to the reader that the Masoretic editors are aware of the variant spellings of this word within the Hebrew Bible and therefore attest that the variants are accurate as received.

Finally, the Babylonian Talmud provides very helpful background information why Joseph gave five sets of clothes to Benjamin. The Talmud indicates that Benjamin was the ancestor of Mordecai (from Esther 2:3). The five coats in Bereishit 45:22 are therefore in parallel with Esther 8:15, which the Talmud references in b. Megillah 1:13, I.1.A [Folio 16a and Folio 16b]. 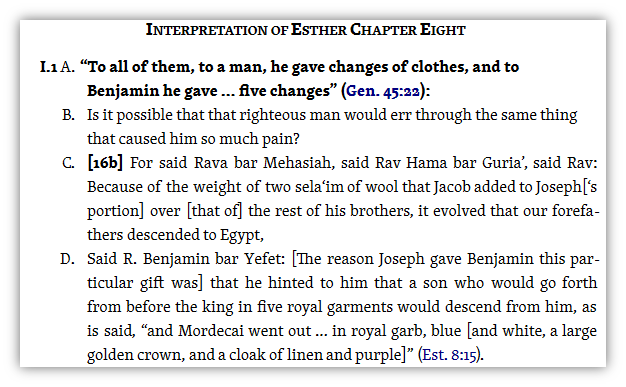 In other words, the Talmudic rabbis understood that Mordecai “. . . went out in royal garb, blue [and white, a large golden crown, and a cloak of linen and purple],” which were reference to his five sets of clothes. Since Mordecai was the descendent of Benjamin, the giving of five sets of clothes to Benjamin from Joseph had presaged the distinguished place of Mordecai in Jewish history.

The excellent question was raised: “why is the ו present in one word, and missing in the same word later in the same verse?”

First, in old Hebrew (that is, before the eighth century BCE) the Hebrew letter פ (Pe) did not have the final form, which looks like this --> ף. In addition, there were no punctuation marks and no spaces between words. Thus Bereishit 45:22 would have looked something like this (using square characters, of course). *Please click the image, below, to enlarge for ease of reading.* 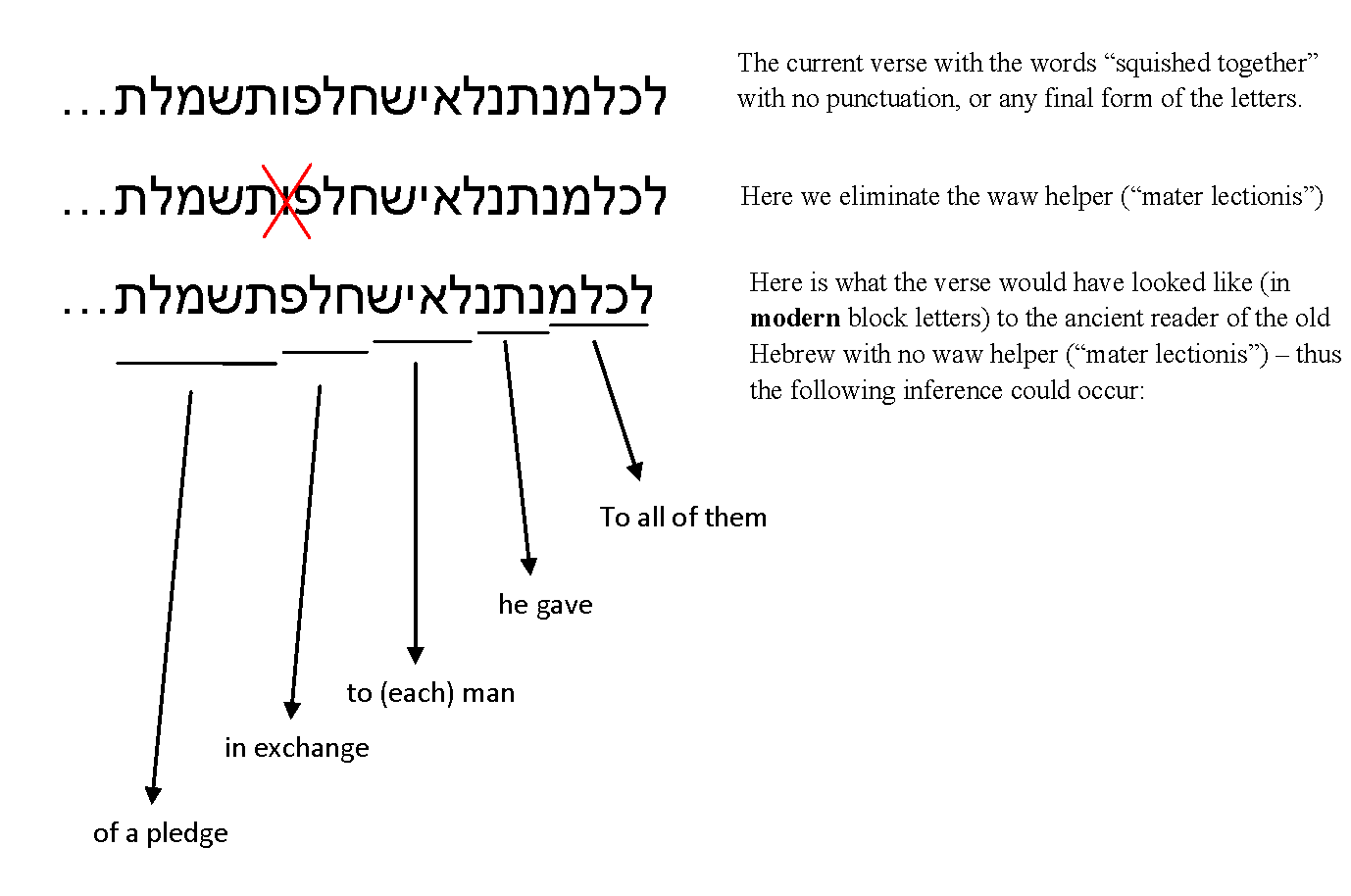 This grammatical arrangement in this order occurs in the Torah in Badmidbar 18:21, where the word חֵלֶף means "in exchange for" (and by the way, the same verb נָתַן, to give, occurs in that verse as well!). The Hebrew word for "pledge" is תְּשׂוּמֶת, which would be misspelled in this verse by one letter (lamed), and of course the absent waw would be read as an absent waw helper. Thus the reader would have to re-read the verse to catch the correct meaning because the word תְּשׂוּמֶת is misspelled. By adding the waw helper in the word חֲלִפֹות, the Torah enables the reader to infer the correct Hebrew word (and phrase) is "change of clothes" and not "in exchange of a pledge (sic)" at a time when there was no punctuation or word spacing in Old Hebrew.

Finally, at the end of the verse, when the same word appears again, there is no need to indicate to the reader (with another waw helper) that the word refers to a change of clothes, and not to gifts given in exchange for promises to behave.

This observation helps us to believe and embrace that the Torah was written in Old Hebrew (in excess of ten centuries BCE); otherwise, with the aid of the two forms of the Hebrew letter ף/פ (which appeared in the eighth century BCE), the need of the waw helper would have otherwise have been superfluous. The waw helper was needed because there was no final form of the Hebrew letter פ in existence, which would have triggered to the reader if the ף was the last letter of the word, or not (i.e., חֵלֶף with the final ף, or חֲלִפֹות?).

Not the answer you're looking for? Browse other questions tagged parshanut-torah-comment words grammar-dikduk vayigash .

8
Etymology of the word sanhedrin
17
Promised to name son Shimon - now husband is Shimon?
1
What is shiduchim?

2
Why not list the 7 Minim in order with no second “Eretz”?
7
Why did the Dor Hamabul earn a painless death?
11
What is the difference between curses that would require changing lashon?
8
What does the ל of לבעבור mean?
4
Why ever rely on a vav hahipuch?
5
Same phrase in two places, one uses dageish and one doesn't — why?
0
Translation of key words in Devarim 10:2 and 10:4
5
Yeraeh el HaAdon, or Yeraeh es HaAdon