so that a murderer might flee there, he who murders his fellow man unintentionally, but did not hate him in time past, that he may flee to one of these cities, so that he might live

I'll assume (as Chabad does) that the word "האל" here means "these," and is simply short for "האלה." (we're supported in this by תרגום אונקלוס and תרגום יונתן, who use the word "אלין" for "האל").

Do any commentaries discuss why the word "האל" is used here, instead of the more common "האלה"?

In the first instance (hap-tip to Joseph for the list) of the use of "האל" in the Torah meaning "these," Bereishit 19:8, Rashi and Ibn Ezra comment on it, both indicating or implying that there's no special significance to this use. Skimming through the Mikraot Gedolot and R' Hirsch (commentaries I have at hand) on this and the other instances, I don't see any other comments. It seems to me that this usage is traditionally assumed to be unremarkable.

Behold now, I have two daughters that have not known man; let me, I pray you, bring them out unto you, and do ye to them as is good in your eyes; only unto these men do nothing; forasmuch as they are come under the shadow of my roof.’

"Ha-eil" - Like "ha-eileh" (these). And the Ga-on said that it/he1 said this for the sake of the the third [messenger] who had not come. But this explanation is a reach, for you also find both of these expressions in the Aramaic language.

1. I'm not sure if this pronoun refers to Lot or to the verse.

In the margin of the Masoretic Text (which is called the "small Masorah") readers will find very important information concerning the word הָאֵל in Deut 4:42, which modifies the plural noun הֶעָרִים. The Masoretes (that is, the people who composed the Masoretic Text of the Hebrew Bible) indicated that the word הָאֵל --with the definite article-- occurs eight times in the Torah, and in each instance the connotation is vulgar -- i.e., that which is not sacred. Thus in the context of Deut 4:42, the three cities of refuge (on the east of the Jordan River) were located in "vulgar" territory. This conclusion finds supporting evidence in commentary concerning the cities of refuge found in the Makkot, which is the fifth volume of the book of Nezikin of the Jewish Talmud.

The Biblia Hebraica Stuttgartensia (BHS) provide two important references concerning the word הָאֵל in Deut 4:42. First, readers will find what the Masoretes had indicated concerning this word, which notes are found in the margin written in Aramaic, or "small Masorah". The image, below, highlights the word הָאֵל in Deut 4:42 in yellow. The upper red arrow indicates the note in the margin, or "small Masorah," and the lower red arrow indicates the wider reference in List 119 of the "large Masorah." 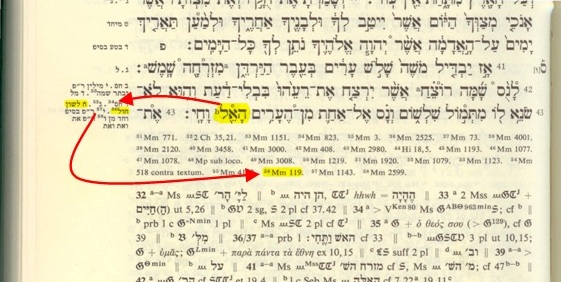 In the left margin the reader will find written in Aramaic: "ח̇ לשון חול," which translated means "[appears] 8 times indicating the profane [or non-sacred] meaning." The lower red arrow points to a reference at the foot of the page, which indicates List 119 in the "large Masorah." Unlike the "small Masorah," which was a mere margin note, the "large Masorah" was the Masoretic "index" at the top or bottom margins of the codex and/or end of the Torah with explicit verse references in the Hebrew Bible. In this example, List 119 is apparent. According to Weil (2001), List 119 of the "large Masorah" lists the following eight passages as follows: 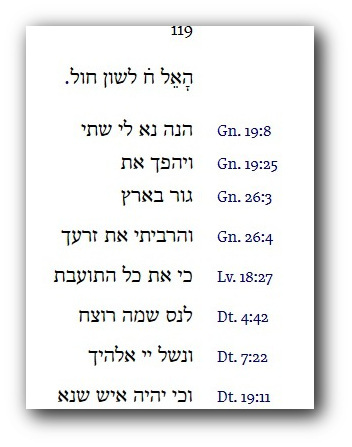 Thus when the reader sees the "small Masorah" and the comment about "vulgar meaning," and then the reader sees the eight corresponding verses of the "large Masorah," the obvious inference is to Gentile-controlled land. Thus the Masoretes viewed the three cities of refuge east of the Jordan River as residing in "vulgar" (non-holy) land.

This perspective from the Masoretic Text is in precise agreement with the Babylonian Jewish Talmud. In commentary concerning the cities of refuge found in the Makkot, which is the fifth volume of the book of Nezikin, we read the following according to the translation provided by Rodkinson (1918):

MISHNA V.: Whither are they to be exiled? To the cities of refuge, three of which are situated on the other side of the Jordan and three in the land of Cana’an. As Numb. 35:14: “Three of these cities shall ye give on this side of the Jordan, and the three other cities shall ye give in the land of Cana’an.” However, until the latter three were selected, those on this side of the Jordan have not protected as yet; as it reads Numb. 35:13-14: “six cities of refuge,” which means none of them protects unless all the six are selected. (Makkot 2:5)

In other words, both the Jewish Talmud and the Masoretic Text are drawing a distinction between the following two verses:

Genesis 15:18 (KJV)
In the same day the Lord made a covenant with Abram, saying, Unto thy seed have I given this land, from the river of Egypt unto the great river, the river Euphrates:

Exodus 23:31 (KJV)
And I will set thy bounds from the Red sea even unto the sea of the Philistines, and from the desert unto the river: for I will deliver the inhabitants of the land into your hand; and thou shalt drive them out before thee.

This nuance is the Biblical concept of "already/not yet" -- the Land of Promise (as far as the river Euphrates) was already promised, but it was not yet to be conquered. Thus there is the nuance in the Masoretic Text (and the Jewish Talmud) that "these cities" (הֶעָרִים הָאֵל) as noted in Deut 4:42 are in "vulgar" territory. It is not that the cities are profane, but that the land between the river Jordan and the river Euphrates is called Canaan, and therefore is "vulgar," because the land is unconquered in its entirety. 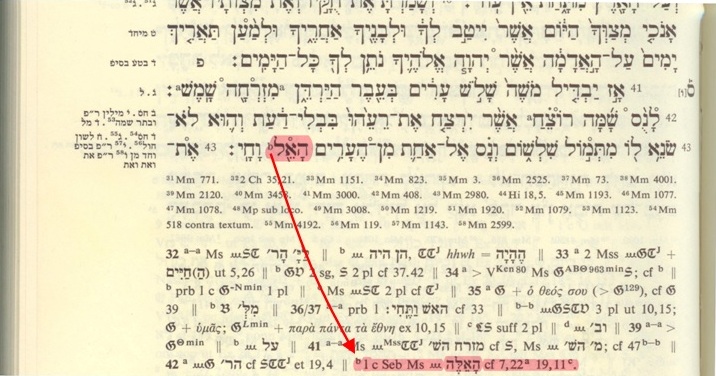 We see the red arrow pointing to comments from the editors of the Biblia Hebraica Stuttgartensia, which is written in abbreviated language which states the following: "Read with suspicion: the Kennicott Bible (and related manuscripts), the Ginsburg Bible, and the Samaritan Pentateuch read “הָאֵלֶּה” – also, Deut 7:22 (note a) and Deut 19:11 (note c)." That is, these other versions of the Hebrew Bible relied on various sources, which indicated the more common “הָאֵלֶּה” reading. As already noted in the above discussion, the Masoretes quarantined the word הָאֵל by associating the word in List 119 of the "large Masorah" with the implicit reference to Gentile-controlled land. Again, the Babylonian Talmud confirms the Masoretic Text (or perhaps, was it vice-versa? -- that is, did the Masoretes record what they had understood as oral Jewish traditional as found in the Talmud?)

The Masoretic Text ascribes the word הָאֵל (which carries the definite article) to non-sacred uses in the Torah; that is, in every instance in the Torah, this word appears in the context of the Gentile-controlled lands, which are "vulgar" (non-sacred). Thus, when the Masoretes grouped these eight appearances of הָאֵל in the Torah under the rubric of "indicating the profane," the Masoretes appear (a) to affirm that the word הָאֵל is the original and therefore CORRECT reading of the passage of Deut 4:42; and (b) the "non-sacred" association of this word suggests that the three cities east of the Jordan lay in "vulgar" territory. The Babylonian Talmud confirms the same, because the Talmudic comments make explicit that although these cities lay in "Canaan" (vulgar territory), they were still part of the Land of Promise, otherwise the concept of the "cities of refuge" would have no meaning unless understood as a unit of six cities in the Land of Israel. And, finally, according to the later narrative of the Hebrew Bible, the complete cleansing of the Land of Promise (as far as the river Euphrates) still awaits its future fulfillment.

This addendum addresses questions and concerns annotated in comments section following this post.

First and foremost, the following excerpt (below) provides the correct explanation of the nuance of "profane" in discriminating between הָאֵל and אֵל, which is the divine name. Please note the mention of Mm 119, which is the reference to the "Large Masorah" (Masorah magna, or Mm) List 119. 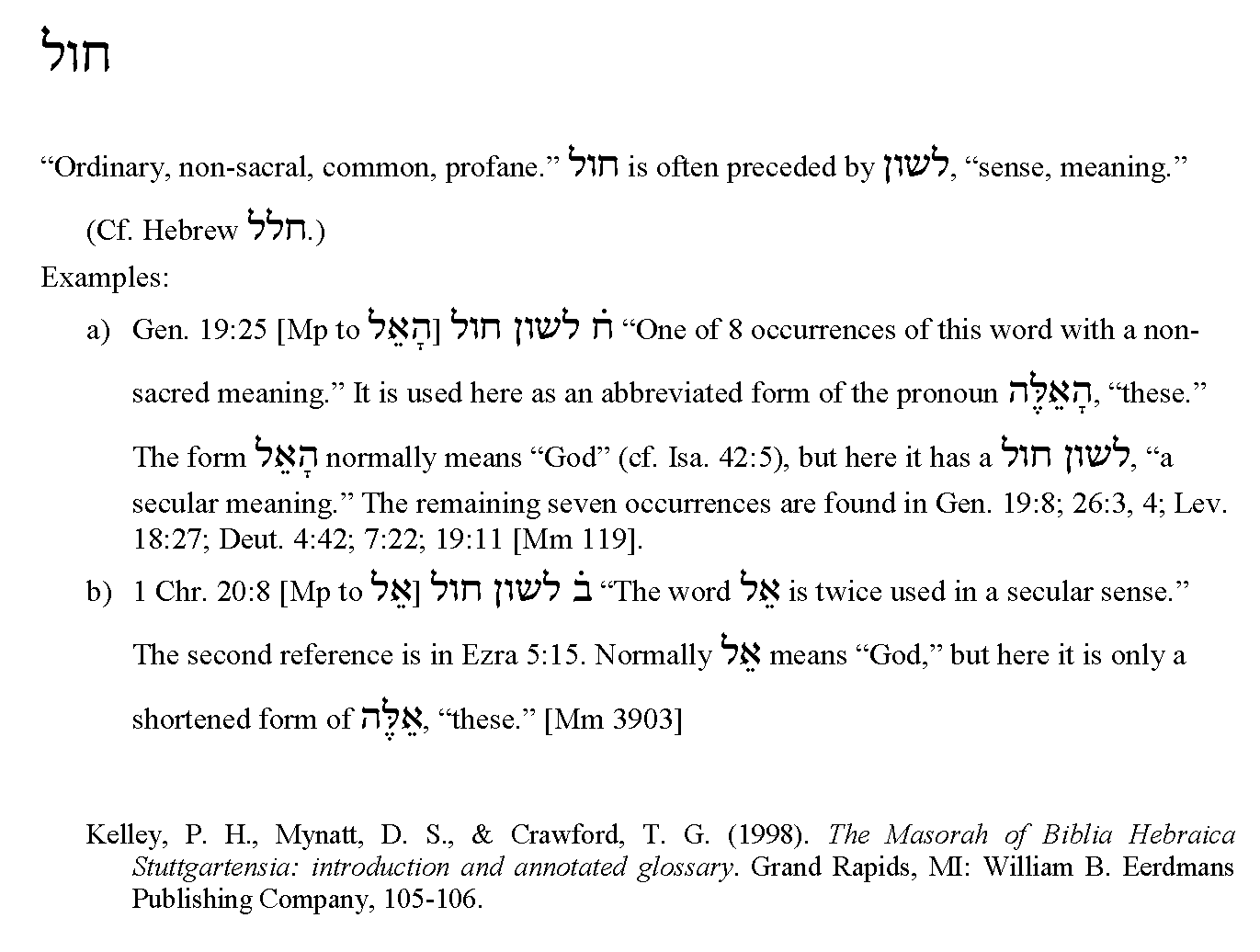 The discussion that follows (and what has preceded) does NOT contradict this view, but complements this view with additional information.

For example, one recent question (in the comments following this post) was that, if the interpretation to the profane (non-sacred) included the objective sense (as asserted in this posting) then why would the first reference in List 119 of the "large Masorah" include angels from heaven? Are angels from heaven "profane"? 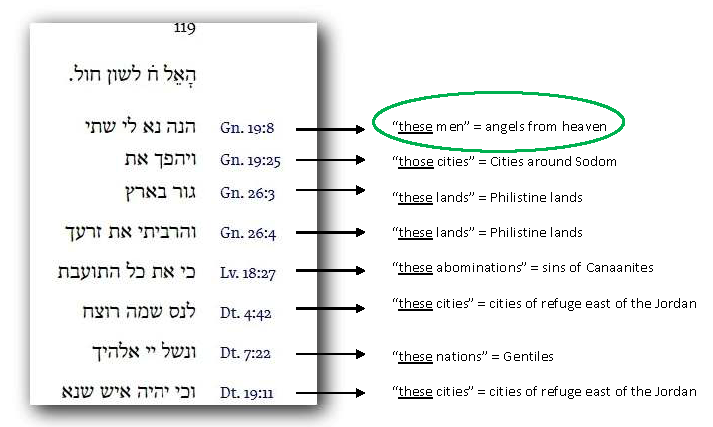 When we turn to Gen 19:8, we see that the word הָאֵל modifies the word for men, which is לָאֲנָשִׁים. When we look at the Masoretic Text, we notice additional information annotated in the margin ("small Masorah") for that word. Please click here. The "small Masorah" points us to the "large Masorah," which is List 1551.

Before proceeding, the original Masoretic note in the margin indicated that there was only one instance in the Masoretic Text of this word in this particular vowel point order. Please note the Hebrew letter lamed with the dot above, which means "one instance" -- please click here.

However, the superscript (number 11), which the editors of the Biblia Hebraica Stuttgartensia (BHS) provided, point to List 1551 of the "large Masorah" as already noted here. 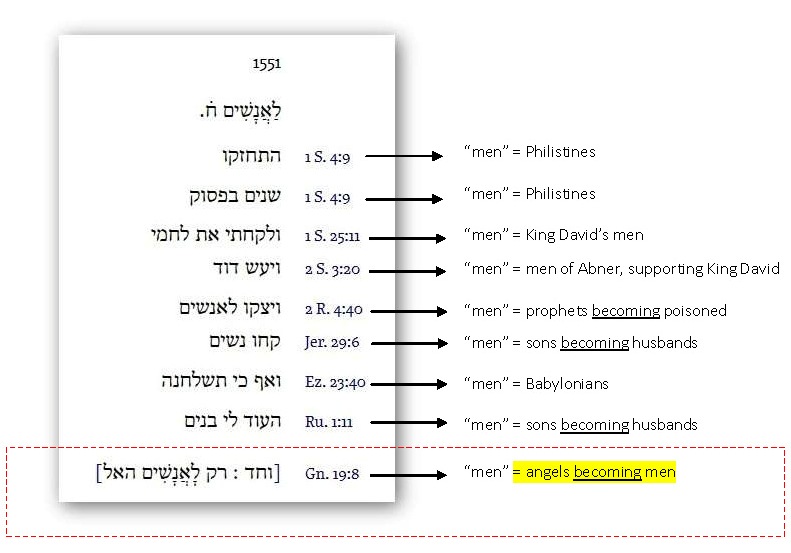 Please note that the Masoretes had not included the last reference, Gen 19:8, in this list, but later included the verse as an amendment (which is why Weil placed the verse in brackets). To put it another way, we may make the tentative inference that the purpose of including this verse in Masorah 1551 was to qualify and clarify why the angels from heaven were "profane."

In other words, from the perspective of heaven, when these angels took on the form of men on earth, they no longer appeared in their glorious angelic state from heaven. In this relative sense, their bodily glory (compared to their mundane state as men on earth) become "profane" in the relative sense. The other verses in this Masorah paint the picture that, in the subjective sense, the angels were not profane any more than the Israelites noted in several of these verses, but in the objective sense, they were "profane" because they took on the form of man on earth.

In closing, the most obvious understanding of the "profane" (with reference to the "large Masorah" List 119) are to discriminate between הָאֵל and אֵל, which is the divine name. However, while this hermeneutic is not incorrect, the fuller nuanced meaning of "profane" appears to lie in other references from the Masorah of the Masoretic Text and to the Mishnah within the Jewish Talmud (regarding the location of the three cities east of Jordan in "profane" Canaan).