Tonight I thought occurred to me regarding Yosef going to meet Yaakov for the first time in Egypt. It depended on where Goshen was, which I thought was south of the main then center of Egypt. I could not find any maps showing where 'Goshen' was in any of the many and various Chumashim at the Shul I was at, but did find a sefer from Mosdei Rav Kook that did. It seemed to show that 'Goshen' was located to the East of the Nile and North of the YomSuf. Is that the accepted location?

An alternate view (which I hadn't previously heard of) is mentioned in Hebrew Wikipedia - that Goshen is Faiyum, southwest of Cairo (which is also famous in Jewish history for another reason - it was the birthplace of R' Saadiah Gaon).

Which one is the real Goshen probably would depend on where in known Egyptian history the story of Yosef is placed. Most historians put Yosef's ministry during the Hyksos occupation of Egypt; during this period the capital was in Avaris, near later Tanis (צוען in Tanach), not far from the area mentioned in Gershon's answer. On the other hand, if it was during one of the periods when the capital was in or near Memphis, then Faiyum is fairly close to there. (And if it's when Thebes assumed that role - well, then, neither of these is anywhere near it; if that's the case, Yosef's "you will be close to me" (Gen. 45:10) would have to be understood relatively - either Faiyum or Qosem would still be a lot closer than the Land of Israel.)

Yehoshua 10:41 and 11:16 indicate that Goshen was part of Eretz Yisrael. The Land of Goshen (mentioned in a 12th Dynasty papyrus as Qosem) lay well to the west of Wadi El-Arish in the vicinity of the Pelusian arm. Commentators who identify Nachal Mitzrayim with the Wadi El-Arish are thus forced to propose the existence of a second Goshen lying east of the Wadi El-Arish but no such locality has ever been identified.

According to Prof. Abraham Polak (1910-1970), Goshen should be identified as a valley just north of modern day Cairo, in the southern part of the delta. This area is drawn out on the map below: 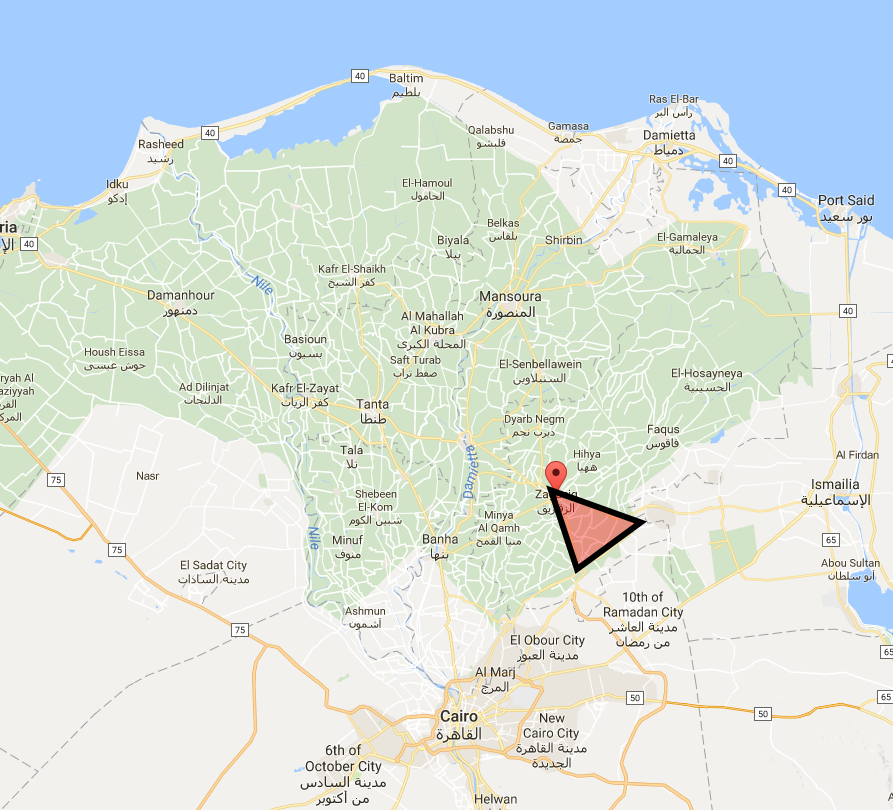 So if Goshen was indeed in NE Egypt (see my comment below Alex's answer) , this would indicate to me that the Bnai Yisroel chose not to leave Egypt when the slavery started in order to fulfill the 400 years dictum. It would also provide an explanation of how the tribe of Ephraim got to the desert

Not the answer you're looking for? Browse other questions tagged yetziat-mitzrayim geography .

3
Where was the Kodesh haKodoshim?
7
From where do the maps of Kriyas Yam Suf come?
4
Where was the "beis Ha'Sereifah"?
12
Where was Adam created?
4
Where is הגר? The country, not the person
3
Where is "Nachal Mitzrayim"?
5
Where was Goren H'Atad physically located?
1
Why would Pharaoh's heart be made כבד by G-D?
4
How does the law of prayer direction apply to a spherical Earth?