Who is this (Haredi) Rabbi? [closed]

Ask Question
Asked 6 years ago
Active 1 year, 3 months ago
Viewed 636 times
2
Closed. This question is off-topic. It is not currently accepting answers.

Who is this Rabbi? 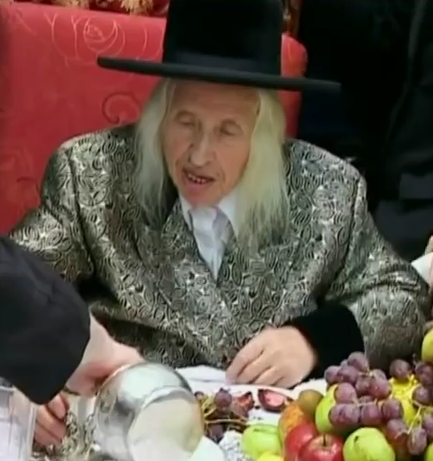 This is a still taken from the beginning of a documentary on Haredi jews in Jerusalem: The Anti-zionist Jews of Jerusalem

I am curious to learn who this Rabbi is, why he is dressed this way and what kind of festivity we are witnessing here?

He is the Kaliver Rebbe.

[Rabbi] Menachem Mendel Taub (born 1923) is the Rebbe of the Kaliv Hasidic dynasty. Born in Transylvania in 1923, he is seventh in a direct paternal line to the founder of the dynasty, Rabbi Yitzchak Izak of Kaliv, a disciple of the Rebbe Reb Elimelech of Lizhensk.

An extremely talented Rabbi who recently moved his headquarters from Bnei Braq to Jerusalem. He speaks quite a few languages, and as a survivor of Auschwitz, he regularly speaks passionately about the Holocaust and Jewish unity. As a twin, Dr Mengele experimented on him and his sister (who didn't survive).

As a Chassidic Rebbe, he regularly conducts tischen where his Chassidim will join him for his meal. This particular picture is likely on Tu B'Shvat when Rebbes are known to distribute fruit.

And, video caption aside, he is NOT anti-Zionist!

Not the answer you're looking for? Browse other questions tagged minhag .

11
Which Hasidic rabbi has no beard, and what is the story?
1
Who is the Veretzky Rebbe that's been coming up everywhere?

4
Handling Conflict between Jewish and Civil Law
5
Chevra Kadisha knots
3
What rabbi recommended that American Jews skip Tachanun on Thanksgiving?
3
What is the source for the custom to get dressed from the top down and undressed from the bottom up?
2
Minhag and nusach differences between Mizrahim and Sephardim (as in OG from Spain/Portugal)
5
Why do some shuls have the Rabbi facing forward?
2
What is a typical Mizrachi Seder like?