What is the prayer uttered by Michael Ginberg's dad in Mad Men?

In the second last scene of episode 5x03 of Mad Men, Michael Ginsberg (one of the Jewish characters on the show) comes back home from the grocer's to be greeted by his dad. The latter encourages Michael to

get girls; an old one and a young one.

and ends up uttering/singing what appears to be a prayer/chant while facing his son and holding Michael's head between his hands. 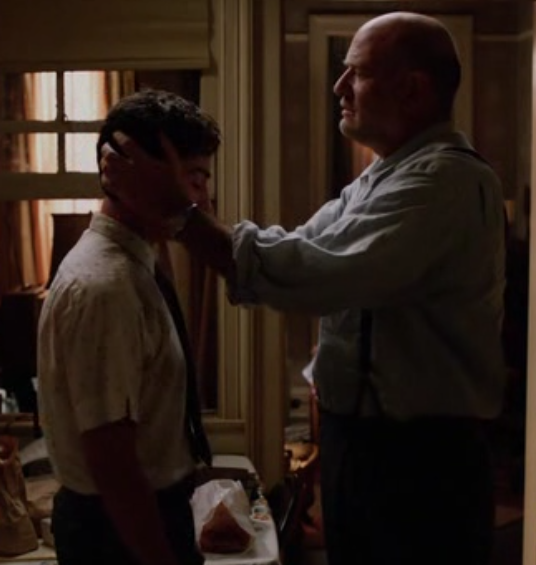 I can't understand that bit, because I know no Hebrew. What is Michael's dad saying at that moment? Is it related to his son being single or not enjoying life enough?

He is reciting Numbers 6:24-26 (he only gets through half of the last verse in that clip):

The LORD make His face to shine upon thee, and be gracious unto thee;

The LORD lift up His countenance upon thee, and give thee peace.

This is known as the Priestly Blessing and it is sometimes used when parents bless their children.

Not the answer you're looking for? Browse other questions tagged blessing hebrew marriage children-parenting popular-culture .

2
What is the meaning of the words כהיום הזה in the prayer על הניסים ?
4
Is a male considered Jewish if his dad is Jewish and his mom is not jewish but the dad had his male child have a brit-millah
8
What is the difference between (for example) “notein” and “hanotein”?
4
What is the mother's obligation to raise children (if she is not obligated to educate (chinuch) them)
1
What does shomo-a tishm'u in the shema prayer mean?
7
What is the source for בית נאמן בישראל for newly married couples?
2
Is the word 'Yahweh' (יהוה) ever uttered in jewish worship
1
What is the Hebrew text for this prayer?
6
What ancient prayer contains the term “Osem” (אֹסֶם)?
5
Fiddler on The Roof — Sabbath Prayer — Authenticity, History, Story behind it