What beracha does one recite upon meeting the US President?

Resulting from this Mi Yodeya question, the references in the question indicate that one does not recite "she-natan michvodo le-vasar ve-dam" upon meeting a non-Jewish head of state of a limited government, such as the President of the USA.

What beracha should be recited in this situation?

It seems to me that the same reasoning and answer would apply to the head of state of any limited government.

The prevailing practice is to say the bracha but without the name of God. So skip the parentheses of

The Artscroll siddur says we don't do the full blessing (with the name of God) because he's democratically-elected, term-limited, and the like; the Tzitz Eliezer holds similarly.

Rabbi Ovadiah Yosef and the Piksei Teshuvot feel that the president is powerful enough to warrant the bracha; however, Nivchar MiKesef OC3 holds that no matter how powerful, if the ruler is going out as a commoner, you can't say the bracha as where's the royal pomp and circumstance? Therefore if the President is visiting a foreign country, "just wearing a suit like any commoner", with a non-showy security detail, Rabbi Yosef advises playing it safe and saying it without the name of God.

However, that same responsum of the Nivchar MiKesef that requires some pomp and circumstance also implies that seeing the royal residence meets that condition. So if you extended Rabbi Yosef's line of reasoning, you would probably conclude that meeting the President at the White House would get the full bracha with the name of God.

Practically, though, between the questions of both pomp and power, it seems the common practice is to say it without the name of God.

R Shlomo Aviner writes (in his book On the air p. 45) that no blessing is recited (and such is the ruling of the Steipler Gaon and the Satmar Rebbe as well) and explains why

The President of the United States is not a king. Halachic authorities mention four criteria in order to be considered a king for this purpose:

The Satmar Rebbe similarly ruled that one does not recite a blessing over the President of the United States since he is not a king (see the book "Edut Bi-Yosef," p. 49 #76).

The Steipler Gaon also ruled that no blessing is recited over a President (Orchot Rabbenu vol. 1, pp. 93-94).

Rav Menashe Klein in his Mishneh Halachos 11:182 and 18:143 writes that on a ruler one makes a bracha even if they do not have they power to kill someone. He notes that for the President one can make a bracha ,but a governor he is unsure ,since the governors of yesteryear had more power.

Text of the teshuva: 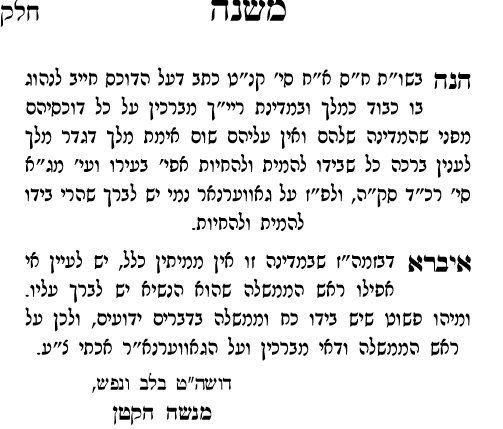 Not the answer you're looking for? Browse other questions tagged halacha blessing .

6
Secret Ops, The President, and The Blessing On a King
12
Does one make a Bracha when seeing the Pope?

11
Beracha upon seeing a friend on a webcam
9
What is the beracha on gnocchi?
13
Upon whom would one make this blessing?
1
Is the Beracha Aharona independent of the Beracha Rishona?
8
Does one say a beracha on medication?
4
At what point should one recite Bracha asher yatzar
7
Do any poskim exempt 13-20-year-olds from Mussaf?
7
What blessings would one say upon receiving the COVID19 vaccine?