Issues with opening a tea bag on Shabbos

I was in a Beis Medrash recently and they had a note that said that despite any heter to make tea, there is no practical way to open a tea bag on Shabbos, and thus tea essence should be used even according to that. [The tea they provide was not pre-opened, I assume for freshness reasons].

What are the issues in opening a tea bag on Shabbos?

I asked the proprietor of the Beis Medresh in question, and he said the main issue is קריע - tearing.

It is a discussion in Achronim (see here) exactly what the nature of tearing is that is forbidden. Following the view that it is separating two things that are glued or woven together (quoted in the פלא יועץ in the name of the Baal HaTanya and the Brisker) then a tea bag typically has a flap which is connected and closed. Opening that flap while avoiding separating it at the intended location would be a problem according to this view.

Interestingly, most people would probably follow the Mishna Brurah who argues on this view, but my understanding is that he forbids making tea in general due to issues of cooking.

While we know that opening food packages is generally permitted - especially if they will be discarded when empty - tea bags are slightly different.

While you open the tea bag to get to the tea "sack" you are - at the same time - creating a "handle" on the top of the string, from the square little piece that is pre-cut. 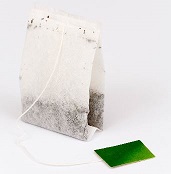 My guess is that cutting out this "handle" may be problematic with regards to מחתך - one of the Avot Melacha.

Not the answer you're looking for? Browse other questions tagged halacha shabbat .

7
Is using a book with letters stamped on the sides melacha (erasing) if the book wasn't closed in the first place?
8
What are the issues with wearing gloves on Shabbos?
5
Making Wissotsky tea on Shabbos
2
Opening a matza box on Shabbos?
7
if someone never eats bread during the week, only on Shabbos and he is not sure whether he said Retzai or not, does he repeat Birkhas Hamazon?