What is the basic requirement for tzitzit knots? 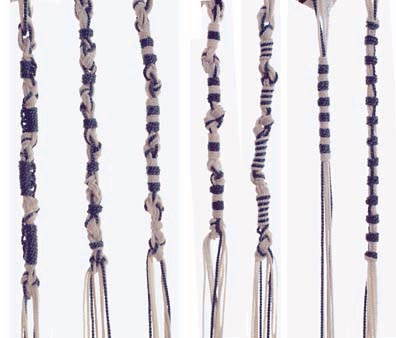 There seems to be a lot of different ways to tie tzitzit knots. From the little I understand this is based on various symolism and numeric value (see this question/answer). I would like to know what the basic essential halacha is. Meaning, If I have 8 strings per corner and I tie 5 double knots is that sufficient?

The Gemara in Menahot 39a implies that the bare minimum Biblical obligation is only one knot. However, Tosfot there understand that this single knot mentioned by the Gemara is actually (what we would call) a double knot, because a single knot doesn't hold tight. However, there are other traditions of how to make this knot, such as in the example all the way to the right in your picture.

However, the Rabbis have a tradition (quoted in that same place, Menahot 38b-39a) that there must also be 'chulyot', which is usually translated to mean 'windings', which is why you see in the picture that you have a combination of knots and windings. The Gemara (there) states that one should alternate windings and knots, and that there can be anywhere between 7 and 13 windings. (However, it isn't clear if each 'winding' refers to wrapping the string around once, or groups of a few windings, as in most of the examples in your picture.) This may imply that the minimum (Rabbinic) requirement is 7 knots.

Another tradition, quoted by Rashi (Numbers 15:38) and the Midrash Tanhuma (Korach 12) is to make five knots on each corner. Therefore, the minimum Rabbinic requirement would be five knots, which is indeed followed by most Jewish communities, with a few variations on the number of windings (see Shulchan Aruch O.C. 11:14 and commentators there). Therefore, if you were to merely tie five knots, (separated by series of one string wound around the rest at least 7 times) that would almost certainly fulfill the mitzvah according to the Rabbinic requirements.

6
Tzitzit tying: the real way
5
Little knots of wool on the bottom/side of the Tzitzit
6
Tzitzit length after knots
3
Should I improvise a b'racha in a case of doubt?
12
Why can't we distribute mitzvah obligations around the community?
8
Keeping tzitzit knots from coming undone