Can an unmarried woman halachically cover her hair?

Whilst studying I came across this,

Jewish women should not walk in the marketplace with uncovered hair. [This applies to] both unmarried* and married women.

Followed by this note,

*I.e., a widow or a divorcee. A woman who never married may wear her hair uncovered (Chelkat Mechokek 21:2).

Simply put, may under any circumstances a never married/divorced woman cover her hair? In the note it says "may wear her hair uncovered", which implies that such a woman could cover her hair and need never to have been married or be currently married to do so. It sounds like it is permissible.

I also wonder if it is allowed for a unmarried woman for personal tznius reasons to cover her hair.

When speaking of "personal tznius reasons" this discussion came up in a class. As some married women choose to, for instance, never uncover their hair as it is seen to be meritorious. The question was asked if it were allowed for unmarried women to have a similar, but of course situational different, high standard.

Consulting my local Orthodox rabbi is a given. However, I like hearing different perspectives. Sometimes LORs don't elaborate on their answers or answer so simply that a discussion doesn't benefit from the answer.

Consult your local Orthodox rabbi. The answer should end there.

But really, motivations really matter here. Let us say that I say that there are indeed unmarried girls in Meah Shearim who, based on this Rambam, braid their hair (so that it is not parua). And that in Yemen, Jewish unmarried girls cover their hair just like the Muslims.

If done as a deliberate divergence from the normative standards of tznius, that is, Daas Yehudis, then even if technically within the realm of tznius the practice is allowed, hashkafically, it might be quite problematic. There are groups of women, such as the Burqa Babes, who have formed their own sect and reject rabbinic authority. (And attract attention to themselves with their extremes of tznius, which in fact runs counter to tznius.) Halachic norms are halachic, and you should not necessarily be adding upon yourself more extreme degrees of tznius.

Could you elaborate more upon "personal tznius reasons"? 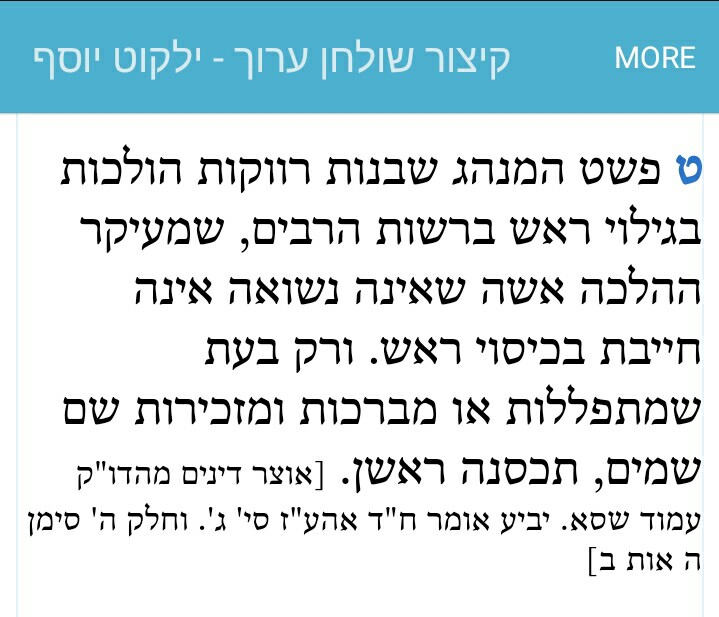 This is what Yabia Omer says about women covering their hair. מעיקר הדין they don't need to until married, apart from praying or studying Torah when EVERYONE should wear a head covering. I'm not sure why so few people actually follow this.

So an unmarried woman must cover her hair during Torah/prayers according to R' Ovadia, and can go without at other times.

Whether an unmarried woman is "allowed" to cover her hair is not only dicussed in Halachic literature, but it is expressly discussed in the context of whether she is obligated.

The discussion, as you mentioned above in your question begins, with the the Rambam. He writes in (Issurei Biah 21:17)

Jewish women should not walk in the marketplace with uncovered hair. [This applies to] both unmarried and married women.

The Rambam rules that even an unmarried woman is obligated to cover her hair.

The Shulchan Arukh follows the Rambam's rulings regarding both matters – that the law that a woman's hair is a sexual incitement belongs to the laws of modesty and that the law regarding head covering applies even to an unmarried woman (Even Ha-Ezer 21:1-2).

However, The Beit Shemuel (Even Ha-Ezer 21, no. 5) and the Chelkhat Mekokek (there, no. 2) interpret the Rambam and Shulchan Aruch differently and distinguish between "unmarried women" and "virgins."

The Magen Avraham (Orach Chayyim 75, no. 3) resolves the contradiction differently: The law of head covering applies only to a married woman, whereas the prohibition to walk about with "wild hair," which the Shulchan Arukh codifies in Even Ha-Ezer, relates to wild hair in its plain sense. In his view, the Sages decreed that a single woman must gather her hair together and not let it fall wild.

The accepted practice follows the Beit Shmuel and not the Magen Avraham. Thus, a single woman is not obligated to cover her hair, but a widow and a divorcee are obligated to do so (source)

For different reasons altogether, Rav Yitzchok Berkowitz ruled for a single woman; who was a teacher in a seminary teaching female students, that she is obligated to cover her hair.

His reasoning was that she is in a position of respect, and the underlying principle of hair covering and tznius in general (he did not provide a definitive source), is dignity and self respect, therefore she should cover her hair.

I haven't heard anything on stopping an unmarried woman from covering her hair although if one has never been married then doing so isn't necessary. On the other hand for those that have been married and no longer are either through divorce or becoming a widow (G-d forbid for either) then we have this concept where once someone begins to take on an action they may not subtract from it. Even in the case of a single girl who has never been married if she takes on the unnecessary stringency of covering her hair then she may not stop covering her hair in the future if she decides doing so is burdensome before getting married. The other issue besides this is making it appear as if one is already married may make it difficult to get married. If people in the community see you with your hair covered already it may be assumed your married. yes that could easily be corrected by those who know you well but then there will be confusion as to why exactly you started covering your hair when it isn't necessary

It is assur. It's a chutzpah to the rabinnic authorities! It's a statement that says "you guys didn't do your job by enforcing more rabbinical restrictions."

1
Is a non-virgin permitted to cover her hair?
17
Why do men or boys have to cover their hair, but not unmarried women?
12
What is the conceptual definition of tzniut?
2
Can an engaged woman cover part of her hair as a practice in tzniut?

15
Why do divorced or widowed women still need to cover their hair?
13
Woman's hair covering in the home or in private
9
Woman wearing her husband's comfortable clothing
9
Minhag for married women to cover their hair in bed
4
Does a Jewish woman married to a non-Jew need to cover her hair?
2
Is it wrong not to wear a bra?
12
Does a woman have to cover her head if she is bald?
2
Origin of exemption on covering hair for unmarried women