Did Sadducees consider themselves Jewish?

There are a few quotes where Sadducees try showing to the Rabbis how the Jews are bad people.

What was their claim?

Yes, the Sadducees did believe they were Jewish.

However, the confounding factor in the quotes you provide is probably this: That in many gemaras, because of medieval censors, "Christian" or rather "Min" (Christian sectarian) was replaced with "Sadducee".

See for example the London manuscript of Yoma 56b that you cited above. I have drawn a red arrow to the word מינא: 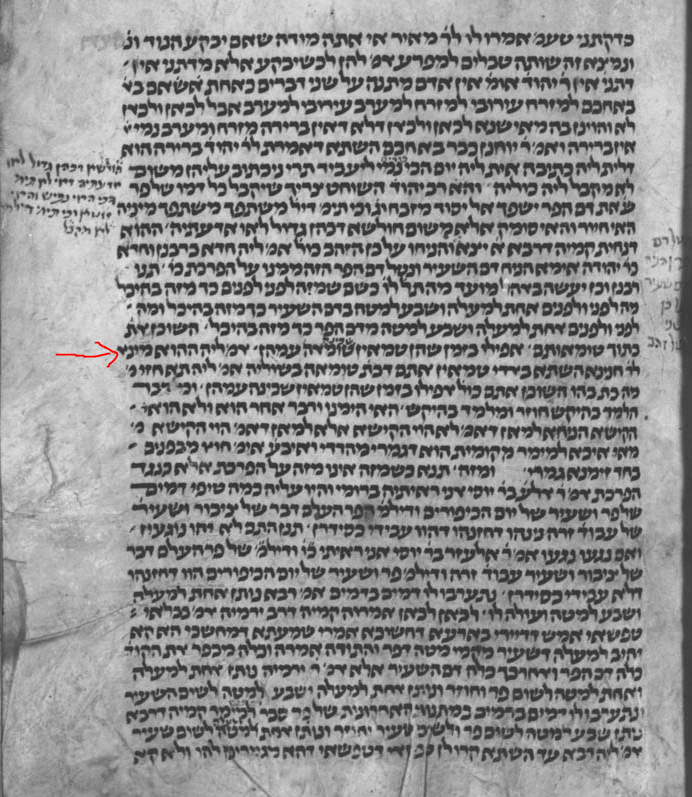 So too in the Munich manuscript on the same daf in Yoma (I've included the right margin, so use that to locate this snip in this larger image):

The idea behind replacement theology is that God has removed himself from the Jewish people for being so awful, and has therefore replaced them with a new nation, namely the Christians, in terms of the Abrahamic Covenant.

As such, verses speaking about how awful the Israelites were such that God has abandoned them are precisely the sort of verses they would cite to prove the replacement theology. It would not be self-criticism to cite these verses. These verses would presumably not be targeting the new nation within the new covenant.

Thus, in Eruvin 101a, Michah 7:4 reads טוֹבָם כְּחֵדֶק, יָשָׁר מִמְּסוּכָה; יוֹם מְצַפֶּיךָ פְּקֻדָּתְךָ בָאָה, עַתָּה תִהְיֶה מְבוּכָתָם, "The best of them is as a brier; the most upright is worse than a thorn hedge; the day of thy watchmen, even thy visitation, is come; now shall be their perplexity." That only the prophet, who is כְּאָסְפֵּי קַיִץ, "the last of the summer fruits", is righteous. But among the people, even the "best" is really a briar. Rabbi Yehoshua reverses the ascribed meaning, such that the righteous do exist and their merits protect us. Or alternatively (and this is polemics, mind you) they send the other nations of the world to Gehinnom.

And in Yoma 56b, it is all about sin and rejection by God. The verse in Eicha 1:9 reads, טֻמְאָתָהּ בְּשׁוּלֶיהָ, לֹא זָכְרָה אַחֲרִיתָהּ, וַתֵּרֶד פְּלָאִים, אֵין מְנַחֵם לָהּ; רְאֵה יה אֶת-עָנְיִי, כִּי הִגְדִּיל אוֹיֵב, "Her filthiness was in her skirts, she was not mindful of her end; therefore is she come down wonderfully, she hath no comforter. 'Behold, O LORD, my affliction, for the enemy hath magnified himself." This is a reference to the sending of the Judeans into exile. The Christian says השתא ברי טמאים אתון, you are surely impure. As Rashi explains, the intent is ודאי טמאים אתון ואין שכינה ביניכם שורה בטומאה, you are certainly impure and the Shechina does not dwell amongst you to dwell in impurity. In other words, this is a rejection of God among the Jews. The response of Rabbi Chanina is that God dwells amongst them even though they are impure. Thus, אמר ליה תא חזי מה כתיב בהו השוכן אתם בתוך טומאתם אפילו בזמן שהן טמאין שכינה שרויה ביניהן. He said to him, go see what is written about Him (in Vayikra 16:16), השוכן אתם בתוך טומאתם, Who Dwells with them amidst their impurity. Thus, the figurative impurity does not represent a total rejection of Israel.

As to their claim:

Avot D'Rebbi Natan explains the origins of the Sadduccees and the Boethusians. Zadok and Boethus were students of Antigonus of Socho. He taught that "one should be like a servant who serves the master withoutexpecting a reward..."

Somewhere along the chain of oral transmission1, Antigonus' teaching was misinterpreted to be saying that we don't get a reward in the afterlife, for there is no afterlife2. The students broke into two sects, stemming from their respective teachers. Their beliefs seem to be uniform.

Notice that the end of his saying has a phrase in AdR"N that is not present in Avos 1:3,

... That your reward be multiplied in the World to Come.

The reason for this addition is evident, based on the misinterpretation.

As to the verses that they seemingly bring against all Jews, including themselves:

So it would seem that the Sadduccees were citing verses that did not reflect badly on themselves, but only on the Pharisees, who use the 19 books of Nach to derive many traditional practices. They were essentially saying that if the books of Nach are binding and authoritative, Like the Five Books of Moses, than you must be impure, and you must be at best thorns, etc.

1. The commentator in the left column of the page I cited from AdR"N argues with R' Obadia of Bar Tenura about whether this was Zadok and Boethus themselves or their students.

2. Evidently the saying was misconstrued to be a statement of fact (we are servants who serve Gd without reward), rather than a motto (we should be like).

According to Dr. Lawrence Shiffman, the authors of the Dead Sea Scrolls were themselves a Sadducce group.

The Scrolls literature gives us a great deal of insight into how the Dead Sea Sect viewed themselves.

For example, in the Damascus Document, CD, the sect refers to their own founding as God's establishment of a "faithful house in Israel" - the earliest Hebrew form of the phrase, "Bayit ne'eman b'yisrael." (See: http://en.wikipedia.org/wiki/Damascus_Document)

Furthermore, from 4QMMT, Miqsa'at Ma'aseh HaTorah, also known as the halakhic letter, it is clear that they view themselves in direct continuity with the laws of Moses, the prophets, and they exhort the other Jews to follow in the example of the righteous Kings of Israel.

From this it is clear that the Sadduccees thought of themselves as Jewish, and of their opponents as Jewish. However, they saw themselves as in possession of the truest expression of God's will, exemplified in their adherence to the Solar Calendar of the Book of Jubilees.

That means they were very similar to other Jews - they thought they were right, and that other groups were wrong.

Yes, in fact for many years they were the majority of members in the sanhedrin . (see Talmud bavli Kiddushin 66a, Talmud Yerushalmi Berachot 7:4, and Megillat Ta'anit ch. 10)

The sadducees did not strictly read tanach litterally, often conflicts in the Talmud are instances where the saducees were making fun of the pharasee interpretations.

Not the answer you're looking for? Browse other questions tagged tanach heterodox sadducees .

7
Sadducees and Karaites - same beliefs?
5
Are Christians and/or "Messianic Jews" considered Jewish by Jews?
11
Were there any Sadducees on the Sanhedrin?
1
How to Reconcile if/when the Jewish Day Was to Begin at Sunset?
3
Did Maimonides consider Esther the most important book in the Tanakh other than the Torah?
17
Do Jews today consider the King James translation of the Tanakh to be acceptably accurate?