Examples of Rabbis who had strong disagreements and were amicable

I'm looking for examples of Rabbis who had a serious disagreement and were nevertheless very kind and thoughtful towards each other.

The main reason I'm asking for examples is to illustrate what a machlokes le'sheim shamayim looks like with regards to the relationship between the disputants.

Basically, although the ספר was written to argue with the words of the ט"ז, everyone should know that it's not personal and the ש"ך holds the ט"ז in very high esteem, and that when the ט"ז came to visit he accorded him much honor, and the ט"ז kissed him on his head, and the machlokess is l'shem shamayim.

The Mishnah says that Beit Shamai and Beit Hillel would still intermarry with one another, and they would still borrow utensils from one another. The Talmud, (14a), explains that they each was aware of the other's opinion and they would be sure to let one another know of any discrepancies in a person's category of marriageability or a vessel's state of purity. The Talmud further explains that this is meant to teach us that there was camaraderie and friendship between them, despite these arguments, and more that the Talmud mentions.

Raban Gamliel and Rabbi Joshua: Raban Gamliel, the Nasi, or president of the Post-destruction Sanhedrin in Yavneh would frequently discipline Rabbi Joshua, the Av Beit Din, or Head of the Court, for ruling against him, because he felt that it was very important for there to be a united halachic authority in the diaspora, to avoid schism. He was amicable toward him, even during these disagreements, showing affection and declaring Rabbi Joshua his superior in intellect, (Rosh Hashana 25a).

After multiple instances of this public reprimanding, the people, feeling that Raban Gamliel was being too zealous and strict with Rabbi Joshua, had Raban Gamliel deposed and replaced by Rabbi Elazar ben Azaria.

The Talmud states that Raban Gamliel himself didn't keep himself from the place of learning, out of bitterness or shame, for one moment. He and Rabbi Joshua got in to an argument about allowing a reputed Amonite convert to marry full-fledged Jews. There was a back and forth, resulting in Rabbi Joshua's being right.

Raban Gamliel, realizing Rabbi Joshua's authority, concluded that he must apologize for his behavior. He went to Rabbi Joshua's house and attempted to open a dialogue with him by observing from the pitch on his walls that he was in the business of charcoal, or a blacksmith. He was not aware that the walls were black because of Rabbi Joshua's poverty. Rabbi Joshua admonished him, saying that he was not a good leader of this generation, because he did not know of the difficulties Sages must go through to feed and sustain themselves, (Raban Gamliel was very rich and Rabbi Joshua was very poor, see 4th to last paragraph).

Raban Gamliel accepted this admonishment and asked Rabbi Joshua to forgive his austerity. Rabbi Joshua, again utilizing a teachable moment, did not respond, until Raban Gamliel showed humility by requesting forgiveness not for his honor, but for the honor of his father. Rabbi Joshua accepted his apology and sent someone to request that Raban Gamliel be restored to the position of president. When the messenger was ignored, Rabbi Joshua went himself to sue for Raban Gamliel's pardoning and reinstatement. He succeeded, (Brachos 27b - 28a).

Rabbi Avraham Yitzchak Kook and Rabbi Yosef Chaim Sonnenfeld were practically polar opposites in terms of hashkafa (for example, in response to Rabbi Kook setting up the Eretz Yisrael Chief Rabbinate, Rabbi Sonnenfeld set up the Edah Hacharedit, refusing to follow the Chief Rabbinate) but greatly respected one another, nonetheless, and were even friends.

Several anecdotes can be found here, in particular:

Translation: "And in "Yechidei Segulah" of Rabbi Issar Frankel, it is brought in the chapter on Rabbi Sonnenfeld that as an answer to being questioned by his men why he spoke with Rabbi Kook in issues of Torah when they met on the street, he answered: "Rabbi Kook is a completely righteous person, but our paths differ!""

Translation: The great Rabbi Menachem Yehudah Ushpizai zt"l escorted one Shavuot morning Rabbi Kook on his way to the Kotel after Vatikin prayer at his Beit Midrash, the Beit Midrash of Yeshivat Merkaz Harav, at the time. In an alley near the Kotel, they met Rabbi Sonnenfeld who was on his way back from Vatikin at the Kotel, and Rabbi Sonnenfeld blessed Rabbi Kook [who was a Kohen] that he should merit to become the Kohen Hagadol in the Beit Hamikdash.

And with regards to their friendship (thanks to @JoelK for the source):

He [Rav Sonnenfeld] told me with his holy mouth "Many think I am his [Rav Kook's] enemy. I never thought badly of any Jew, and on the contrary certainly not of a Torah scholar like him. If I ever speak against his actions this too is out of friendship."

Here they can be seen sitting together with no animosity between them: 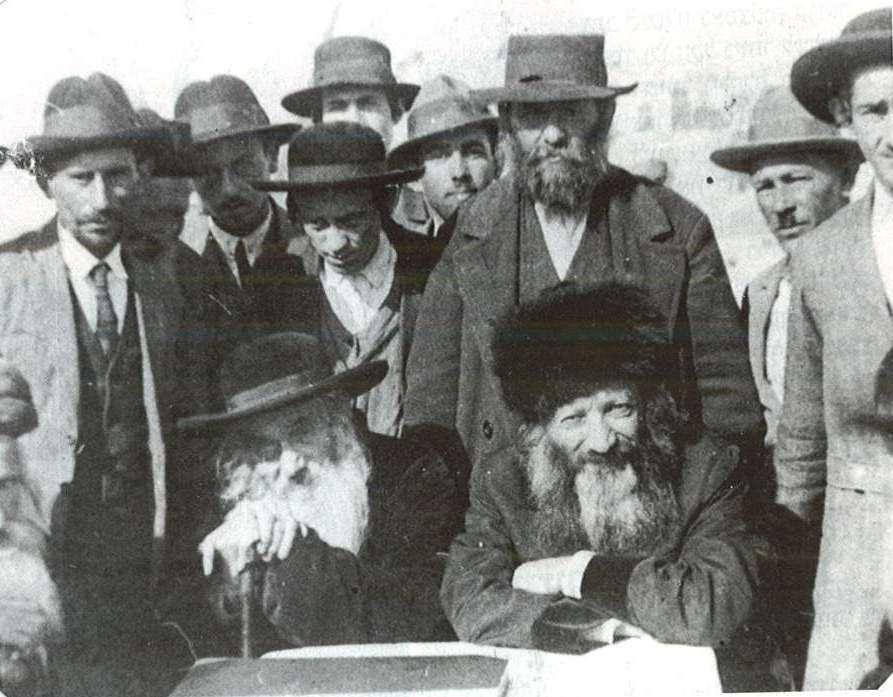 Rav Yochanan and Reish Lakish. BM 84a records that they were brothers-in-law and close friends. When Reish Lakish died, other Rabbis tried learning with Rav Yochanan but couldn’t compare. “Whenever I said something, Reish Lakish would pose 24 questions against it and I would respond with 24 answers, and you tell me ‘here’s a source to support you’?!” He became so distraught over the loss of his learning partner whose challenges he loved so much that he became mentally insane to the point that the other Rabbis davened that Hashem put him out of his misery.

Not the answer you're looking for? Browse other questions tagged history rabbis mussar-ethics machlokes .

17
Why are challenges to respected rabbis not treated seriously?
4
What is the religious significance of the existence of many denominations and sects?

55
About what were rabbis ahead of the times?
4
Who were Hillel's greatest students and what were they known for?
1
Rabbis who don't wear neck ties?
6
Were ancient Rabbis night owls?
0
What Jewish leaders/rabbis/prophets were active in years 3350-3360?
4
Who were the leaders of the Jewish religion between Ezra and the 1st Zugot?
3
Church fathers and the Rabbis