Doors and Doorways in Parshat Vayeira

In this weeks parsha of Vayeira, I counted 6 references to the words דלת and פתח, all in the story of Lot and Sodom. I don't believe this is a coincidence, since its all about standing in the door, opening the door, closing the door, all of which is irrelevant information. It must be teaching something.

An even bigger mystery is the corresponding haftarah in 2 Kings Chapter 4 made 5 references to the words דלת, פתח, (in reference to closing a door:) סגור.

What is the significance of this?

He notes that there are interesting parallels with the story of Sodom and Pesach which is highlighted by this constant repetition of "door".

What follows is Lot is stuck in house with the malachim guarding him, then rescuing him and overturning Sodom. A close examination on the pasukim shows incredible similarities between what happened in Sodom and the Bnei Yisroel's salvation from Egypt. 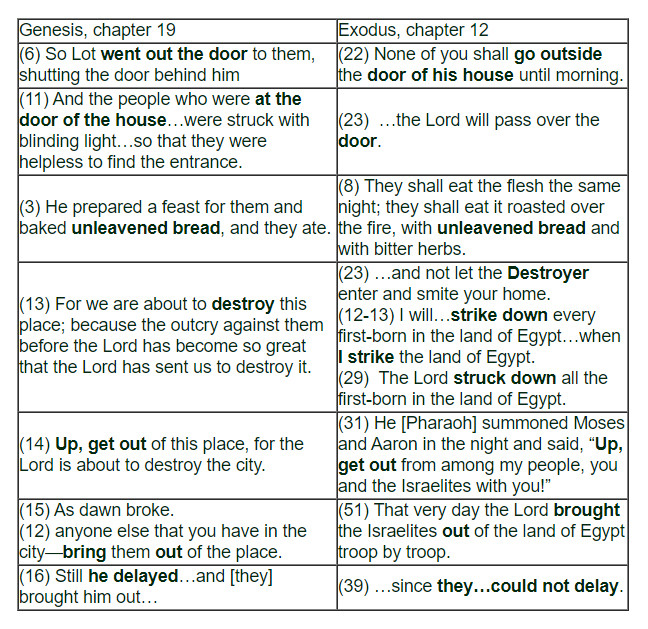 The parallels attest to an amazing similarity between the two events: a closed house, a Destroyer, angels that destroy the wicked and save the good, departing from a certain place in the wake of a command (“Up, get out”), not delaying (Lot, unlike the Israelites, delayed and the angels had to drag him out themselves), and events that take place throughout the night.

So the first raft of "door" emphasis mirrors the experience in Mitzrayim where the Jews painted blood on the door frame and lintel so that the Malach Hamoveis would 'pass over' their door and target only the Egyptians. Equally, here the place of Sodom had been decreed to be destroyed through a heavenly force (i.e. angels) and Lot was safe on the other side of the door. Indeed (l'fi ani da'ati) this tallies with the Radak's definition of door on 19:9 -

THE DOOR — This term דלת signifies the wooden frame-work which swings round on hinges to close and open the entrance (cf. Verse 11).

Both called for performing an act that endangered the one who did it, thus attesting that the person had rejected the ways of his environment: Lot took a risk by taking in guests and thus demonstrated his rejection of the society of Sodom; the Israelites slaughtered a lamb, an Egyptian deity, thus showing their severance from Egypt.

So, (again my analysis) the repetition of "door" helps bring this out. Sodom stood for being anti-hospitable, i.e. this meant not opening up your homes to guests. Yet, this mindset was antithetical to Lot who grew up in the house of Avraham and was regularly used to an 'open door' policy.

As far as why there has to be this connection with Pesach, I would posit that possibly because the whole message of Matzah (i.e. poor man's bread) is on Pesach to remember that we are now free1 - we were saved and were zoche to a miraculous redemption. So perhaps in much the same way, we focus on it being Pesach by Lot because he too experienced a miraculous redemption - and the repetition of 'doors' helps to draw parallels.

Using this a baseline, perhaps it is this connection which ties in with the Haftarah. In the same way Lot was afforded Divine intervention similar to that of the Pesach story through agents of Hashem, we likewise have two instances where both a widow and the Isha Shunamis are sent a heavenly salvation through a shaliach i.e. Eliyahu HaNavi. The repetition of door helps to demonstrate as it was the channel through which these miracles were wrought. Indeed Rashi on Melachim II 4:4 writes that the reason why the door had to be closed was because it afforded respect to the ensuing miracle if it comes about in secret - i.e. it was a personal redemption that required a degree of modesty and privacy for the recipient.

1 Refer to Rav Yaakov Ettlinger, author of the Aruch LaNer in his Minchas Ani on the Haggada who writes; "The Seder opens with a declaration that we are about to eat “the bread of affliction.” We also invite those who are hungry and needy to join us in telling the story of the Exodus. There are two sides to matzah both literally and figuratively: it represents slavery and freedom, oppression and liberation."

The following is my understanding based on things I've read, but I can't give any sources at present.

On a physical level, a doorway or a gateway is the dividing line between one domain and another. If there is a door, opening it allows people or things to go from one domain to the other, and closing it effects the opposite. (And bolting the door adds another layer of disallowing).

On a spiritual level the doorway also represents a separation of two domains, and closing the door to the outside prevents the entry of (possibly) bad spiritual influence.

It seems to me that this why we need the protection of the mezuzah on our doorways and gateways, and also why specifically the name of Hashem, Shadd-ai is put on the outside, because this name signifies limiting - the name means that G-d said די (enough).

This is also why the job of opening and closing of the doors in the Beis Hamikdash was assigned to certain Levi'im, because it was not just a janitorial task but a very spiritual action.

If you read this parsha and the haftorah with this understanding in mind the various mentions of doors will make more sense.

I do know that one place which partially addresses this topic is the Arvei Nachal on parshas Vayeilech with reference to the entrance of the Tent of meeting, see here.

I think in the Sdom story, it serves to emphasize that there's an angry, dangerous crowd outside and it's just barely safe inside.

In the Haftorah, Malbim and others point out that if we're asking G-d for a miracle, we attempt to make it as non-disruptive as possible, thus the fewer people who observe it the better. Hence miracles are done behind closed doors.

Also, when Rashi is defining the words for דלת and פתח he is not just explaining what the words mean since it would be irrelevant. He is coming to solve a textual problem. Also, notice how he didn’t define דלת when it first occurred in 19:9 but rather in our pasuk 19:11. This is intentional as there is no difficulty with דלת there but only in verse 19 is there a difficulty. I will let you try to think hard what the difficulty could be.

Not the answer you're looking for? Browse other questions tagged parshanut-torah-comment words vayera architecture-design melachim-kings-book-of .

4
Why does revi'i of Vayeira seem to end four verses late?
6
Why does the second aliya of Vayeira start with the last verse of one topic and then change?
6
Universal theory of Biblical eye-raising
8
What is it with the donkeys all over Parashat Mikeitz?
4
Were Zimri and Cozbi inside or outside?
11
Why does the haftarah of Vayeira include the miracle of the oil?
4
Was Pharaoh a Prophet?
4
Why does the Artscroll commentary to Vayeira mention Ishmael?
0
Was it a specific knife and fire?
4
Angels Eating: The case of Avraham Vs Lot