I've heard in the name of one of the Posekei Hador, Harav Bension Musafi, that it doesn't make sense to call it "Kol Nidre" as it is in Aramaic, but most of the Siddurim write Kol. What do the sources have to say?

Here is an image from the Machzor of Worms (from the 13th century) with Kal rather than Kol: 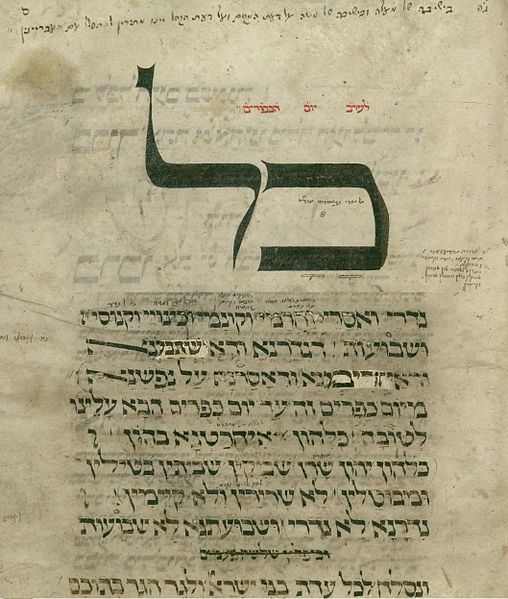 However, please consider that it is written in a hodgepodge of Hebrew and Aramaic. Do you think that the word מיום כיפורים זה and הבא עלינו לטובה or שבועות are Aramaic?

Ultimately, as long as we have the correct intent and are saying what has been established as a nusach, I cannot really see myself bothered one way or the other.

If we trust the Masoretes for their vocalization of Aramaic, then this would should that there is indeed Kol in Aramaic. Which in turn would undermine the entire premise of the question.

By the way, at least in Hebrew, the kamatz of kal is a kamatz katan, pronounced almost like or identical to a cholam. In which case, there would not really be much a difference. Would this extend to Aramaic? Maybe not.

There are a few Sephardic communities which have a tradition to pronounce every qames in Aramaic as qames gadhol: e.g., kal nidre. (Even fewer retain this only in certain common phrases, like kal nidre, but there is probably no basis for this.) This may have developed as an over-correction: people had to be careful to say "ʿalam" and not "ʿolam" so they also said kal and not kol. In all other communities Aramaic has the same rules for qames-qatan as Hebrew does. Beware! that many siddurim spell kol and similar words with a qames but neglect to include the maqqeph. This causes people to err because they think the word has independent stress and therefore the qames must be gadhol. In such places, one should use kol with qames qatan despite the lack of maqqeph. In Ps. 35:10, most traditions consider the qames to be qames gadhol because the word has an accent. In Isaiah 40:12 wekhal with qames gadhol is a verb, and does not mean "all".

Every qamatz at the last syllable with maqaf and another word must be qamats qatan, otherwise the baale hamassora would place a taam miqra in the word "kol".

Not the answer you're looking for? Browse other questions tagged tefilla yom-kippur pronunciation kol-nidre .

11
What's so moving about Kol Nidrei
10
Why do we wear a tallit at kol nidre?
2
Why Psalm 130 for Aseres Yemei Teshuva?
10
What was the ריב"א thinking?
8
Kol Nidre: Is it lawful to pray along with sinners?
4
Tehillim (Psalms) 27:2 -- Is it כָּשְׁלוּ or כָשְׁלוּ?
5
If Kol Nidre is effective, why do people do hatarat nedarim?