Is it heresy to read the Bible literally?

Rabbi Jonathan Sacks in this debate with Richard Dawkins says:

Rabbis in the 10th century laid down the following principle: If a biblical narrative is incompatible with established scientific fact, it is not to be read literally.... And in Judaism we take a strong view on this, and we have now for 2000 years, and we say reading the Bible literally is heresy.

Is this true? Which rabbis said this, and where exactly? Because while I can understand minor details being understood in the context of scientific knowledge, I'm unfamiliar with a principle that would allow one to throw out whole stories that have long been understood as historical, saying they're just symbolic as Rabbi Sacks does with Adam and Eve. Because with that method, as soon as science contradicts the Bible, then the event didn't happen, and that seems (to me) like taking the easy way and making a slightly different new religion every time just because the old one was proven wrong in a detail.

the quote about what Rav Saadia Gaon believed regarding literal vs. non-literal interpretation is correct but incomplete. After he writes "it is a well known fact that every statement found in the Bible is to be understood in its literal sense" - he then lists four cases when it is forbidden to take the Torah at literal understanding. They are (this can be found at the beginning of his long interpretation of the Torah): A) The sense (our sensory perception of the world) refutes the peshat. B) The intellect refutes the peshat. C) There are verses which contradict each other. D) The Sages’ tradition refutes the peshat. This is the textual basis for Rabbi Sacks claim above - similarly the Rambam wrote that IF the Aristotlean understanding of the universe was proven correct (which he didn't believe) - he would reinterpret the Torah accordingly (Moreh part 2:24-28)

The term "literal" and its Hebrew or English counter-parts are not terms with hard and fast meanings so any discussion must necessarily be careful to clarify how the terms are being used in the immediate context.

Generally "literal" meaning refers to the apparent meaning that the reader would reasonably be expected to take away from it. This can also be referred to as the "plain" meaning.

Sometimes "literal" is used in contrast to the "plain" meaning to indicate a meaning that would conform strictly to the words being used without regard to the internal or external context which would provide nuance to how they are used. I would tend to use the term "hyper-literal" for this.

In this later category we may find an excellent example of a "literal" or "hyper-literal" reading which would constitute heresy. Terms such as "the hand of God" or the like do not need to be taken as theological statements about God's anatomy, and those who make such an inference run afoul of one of the Rambam's 13 principles of faith (see also Mishneh Torah Yesodei HaTorah 1:8 and Hilchos Teshuvah 3:7).

Generally, however, we have the concept from Chazal that “אֵין מִקְרָא יוֹצֵא מִידֵי פְּשׁוּטוֹ” Scripture doesn't depart from its plain meaning. (Yevamos 24a and elsewhere). While this is a full discussion on its own, with its own limitations, this is a general principle that guided the Gedolei HaRishonim. Along these lines Rav Saadia Gaon wrote, “it is a well known fact that every statement found in the Bible is to be understood in its literal sense.” (Book of Belief and Opinions/Emunos v'Deos 7:2, Rosenblatt, page 265). And the Rambam explained that, “a mere argument in favour of a certain theory is not sufficient reason for rejecting the literal meaning of a Biblical text.” (Guide for the Perplexed II:25, Friedlander). There is precedent for taking interpretive liberties but one must beware of the limitations of both the Rishonim who speak on the matter as well as basic intellectual honesty.

I wrote to Rabbi Sacks and he said that he believes the story of Adam and Eve to be true, but that he did not have the time to explain it to Richard Dawkins in the debate. He, therefore, suggested thinking of it more as a parable rather than as a historic fact. But he does believe that they were real people. This is a well-established precedent that other rabbis of the past had followed (e. g. Rs' Yohanan ben Zaikai to Parah Adumah).

Here are Rabbi Sacks' own words. This was what he wrote me:

Thank you for your email. Below is Rabbi Sacks’ response to this question;

The truth is that I believe the story of Adam and Eve is true and valid, but I simply did not have the time or the circumstance to explain that to Richard Dawkins in the heat of a very demanding debate, so I suggested we think of it as a parable rather than as a historical fact.

For the record, I believe Adam and Eve were real people. They represent the birth of Homo religiosus, that is to say, the first people to conceive of God as a unity and as Creator of the universe. Their story is true, real, profound, and deeply consequential. I was not, however, prepared to argue the matter in detail in public with an atheist when there were more important issues at hand that we had agreed would form the basis of our conversation. In giving such an answer to someone who would neither accept nor understand the true one, I was following the well-established precedent of, among others, Rabban Yohanan ben Zakkai, when he explained the rite of the Parah Adumah to a Roman (see Tanhuma, Hukkat, 8; see also Yerushalmi Berakhot 9:1; Yerushalmi Shabbat 3:3; Yerushalmi Betzah 2:5; Yerushalmi Sanhedrin 1:2, and many other places).

There are certain things which we believe with perfect faith but which we cannot always fully explain, and it is very important not to expose holy truths to ridicule.

I do thank you for taking the trouble to write. I deeply appreciate the thought that went into your words. May Hashem be with you in all you do.

With blessings and best wishes,

As Rabbi Sacks wrote, it is always very important not to expose holy truths to ridicule. Because that is what people will do when they could not possibly understand. 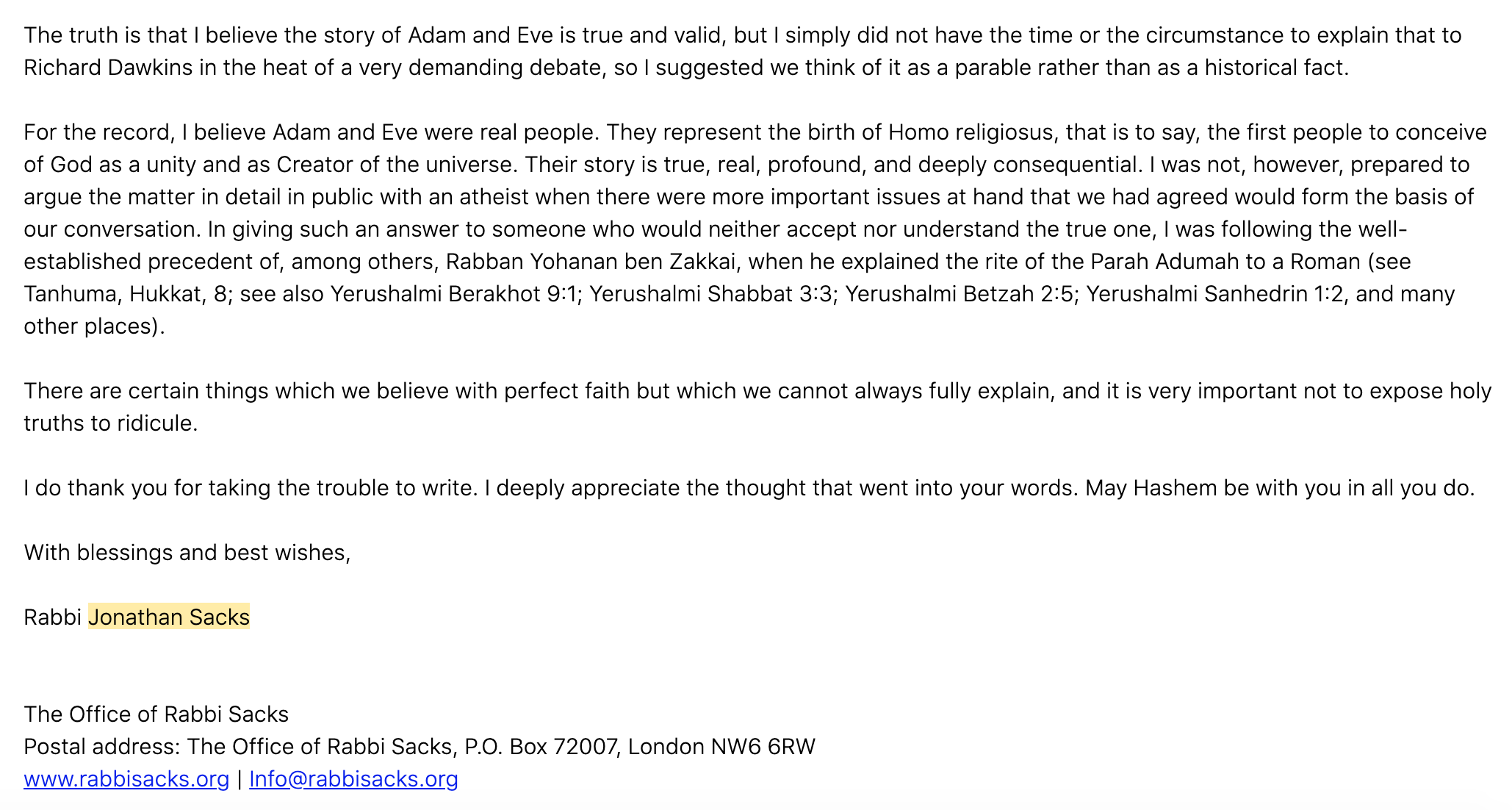 It was taught in Beraisa: Rav Yehudah is saying:

Anyone who translates verse literally is a liar.

Not the answer you're looking for? Browse other questions tagged hashkafah-philosophy tanach science literalism .

34
How can we be sure that Judaism is true/the truth?
1
Should anyone be burned to death?
9
Is there any precedent to read the first 11 chapters of Genesis as metaphorical?
11
"God is Fire": Trying to Source an Analogy for Prayer
1
Should we interpret the Torah literally or allegorically?
5
Why is only the iniquity (עון) of the parents passed on to the children?
1
Arguments against evolution

12
Rationalist Position on Bible Ancients' Long Lives
3
Do English-speaking Jews read the Bible in English?
5
Does Rambam take the 6 days of creation literally?
3
Torah and the Holy Bible
1
Does it matter if one takes Torah stories literally/physically?
4
Must we consider the gemara's conclusions literally true?
2
An apparent contradiction in Ralbag's philosophical methodology
3
Believing Universe to be older than 6k years K'firah (heresy)?