Why is Shavuos all alone?

Why is it that, out of the 16 days of non-High Holiday biblical festivals (7 days of Pesach + 1 day of Shavuos + 7 days of Sukkos + 1 day of Shemini Atzeres), only the single day of Shavuos is without neighbors? All the other days are in adjacent calendrical groups. Why is that?

There are two main Regalim - Pesach and Sukkot. Each one has another one-day mini yom-tov without special mitzvos afterwards. They are each called an "Atzeret" since they have no special mitzvot and are a culmination of the previous holiday. 7 weeks after the beginning of Pesach is Shavuot/Atzeret, and the day after Sukkot is Shemini Atzeret.

The connection between Shemini Atzeres and Sukkos is clear, since there isn't even a separation of days between them. The connection between Pesach and Shavuout can clearly be seen in the the Mitzva of Sefira that connects them and in their connected harvests and korbanot. Also, they left Egypt to receive the Torah on Sinai, which happened on Shavuot.

There are two parallel sets of holidays, so one can then ask why is there a seven-week break between Pesach and its Atzeret, but not between Sukkot and its Atzeret? The Midrash (Yalkut Pinchas #782) asks this question and explains that while the weather is great during shavuot, it would be hard to travel back to Jerusalem during the rainy season, so its Atzeret is right afterwards. (Translation from Sefer Ha-Aggadah): 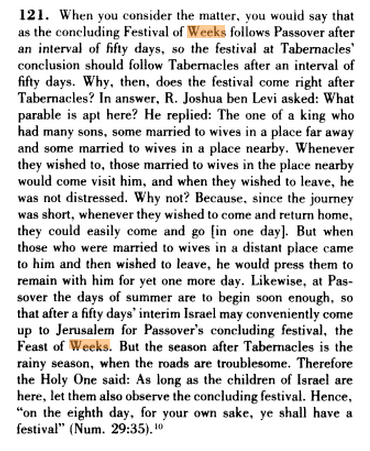 There are some other comparisons that can be made between the Holidays' sets of korbanot and their harvest seasons that may also add to this explanation.

In addition, while shavuot was when the Jews received the Torah, Sukkot is connected to the celebration after receiving forgiveness and the second set of Luchot on Yom Kippur. So it wouldn't make sense to push Atzeret further away into the year. Perhaps the sefirah-parallel period can instead be seen in the Aseret Yemei haTeshuva (and perhaps Elul) which came before.

The Feast of Weeks is the anniversary of the Revelation on Mount Sinai. In order to raise the importance of this day, we count the days that pass since the preceding festival, just as one who expects his most intimate friend on a certain day counts the days and even the hours. This is the reason why we count the days that pass since the offering of the Omer, between the anniversary of our departure from Egypt and the anniversary of the Lawgiving. The latter was the aim and object of the exodus from Egypt, and thus God said, "I brought you unto myself" (Exod. xix. 4). As that great revelation took place only on one day, so we keep its anniversary only one day: but if the eating of unleavened bread on Passover were only commanded for one day, we should not have noticed it, and its object would not have been manifest. For it frequently happens that we take the same kind of food for two or three days. But by our continuing for a whole period [of seven days] to eat unleavened bread, its object becomes clear and evident.

New-Year is likewise kept for one day; for it is a day of repentance, on which we are stirred up from our forgetfulness. For this reason the shofar is blown on this day, as we have shown in Mishneh-torah. The day is, as it were, a preparation for and an introduction to the day of the Fast, as is obvious from the national tradition about the days between New-Year and the Day of Atonement.

The Feast of Tabernacles, which is a feast of rejoicing and gladness, is kept seven days, in order that the idea of the festival may be more noticeable. The reason why it is kept in the autumn is stated in the Law, "When thou hast gathered in thy labours out of the field" (Exod. xxiii. 16); that is to say, when you rest and are free from pressing labours. Aristotle, in the ninth book of his Ethics, mentions this as a general custom among the nations. He says: "In ancient times the sacrifices and assemblies of the people took place after the ingathering of the corn and the fruit, as if the sacrifices were offered on account of the harvest." Another reason is this--in this season it is possible to dwell in tabernacles, as there is neither great heat nor troublesome rain. (Friedlander translation, my emphasis)

Not the answer you're looking for? Browse other questions tagged calendar yom-tov taamei-mitzvot-reasons shavuos .

0
Why is Shavuos one day and not seven?

4
Why do we say Yizkor when we say it?
5
Why are there diferent sacrifice offerings for each day of Succot but the same for all days of Pesach?
5
Connection between the three Atzeret?
6
What did people say in Shemoneh Esrei and Kiddush of Shavuos when it didn't fall out on the 6th of Sivan?