I am in possession of this mysterious painting with Hebrew characters, but I do not know what words mean. I suspect that they may provide a clue to what is being represented in each of the painted panels, which I cannot figure out on my own.

One of my friends mentioned that the one in the lower left is "charity", but was unable to answer the rest of the painting. 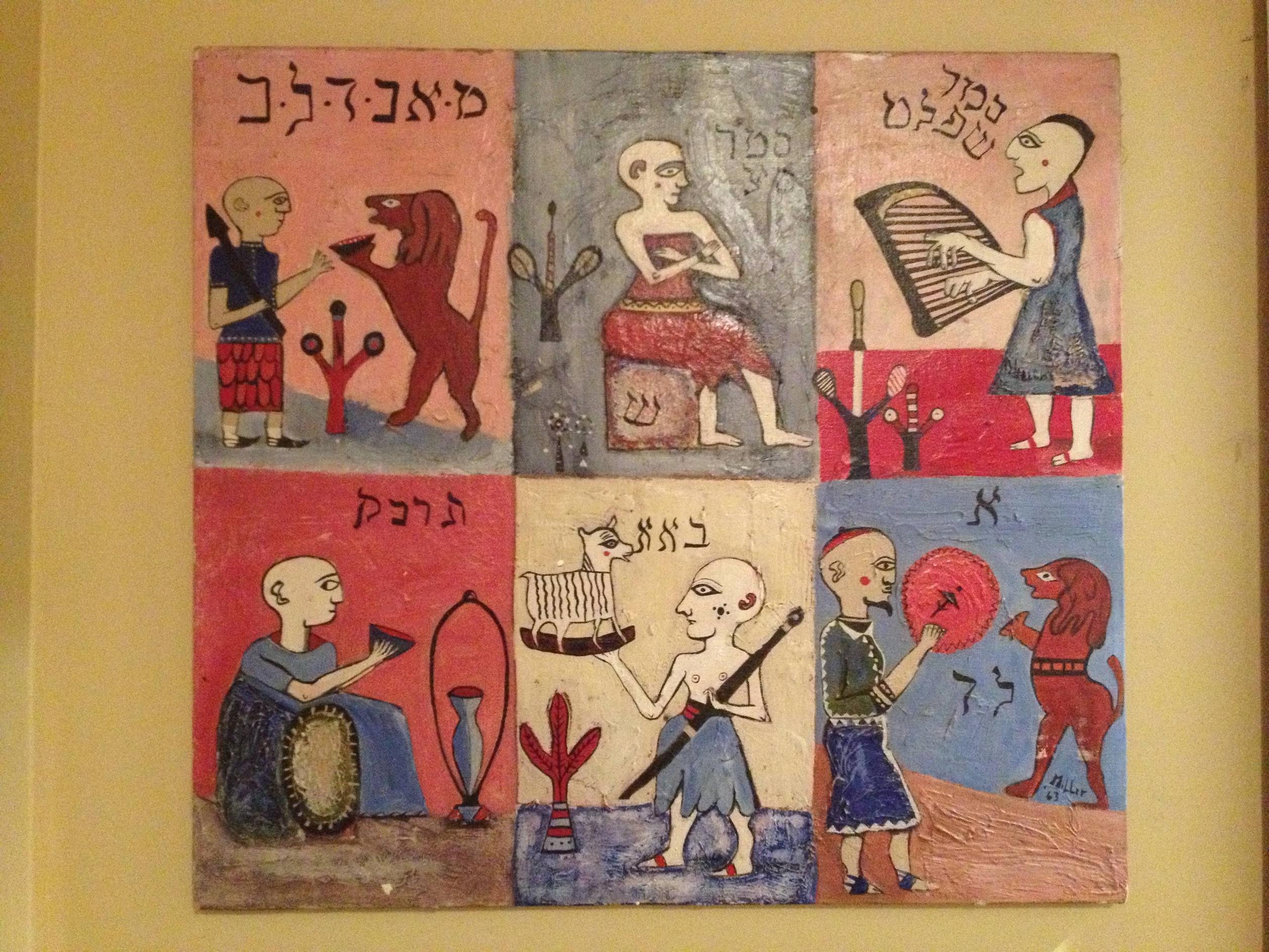 OK, I may have enough of an idea to offer an answer.

Well, this has been fun.

This was definitely painted by someone who was not fully Hebrew-literate, and not used to writing the letters. He may have been trying to make a Jewish- or Biblical-looking painting without knowing anything. However, it is not correct that these are random letters or that it is all nonsense. It is likely that he got the words from books.

I do not speak any Hebrew. I hope these observations will be a start for someone who does:

"Mandln" (Yiddish, "almonds") is the word on the top left. But it is written with a stylistic mistake, the non-final nun. However, some Yiddish sources write in this style, so if he were copying from an early Soviet newspaper, it would make sense.

I have concluded that in the second and third tiles (top-middle and top-right, respectively), he is trying to write "סמר"--ostensibly a name--both times. Both those tiles seem to contain primitive two-word sentences in Yiddish with the form Subject (סמר)--Verb. My best guess is that the intended meanings are "Samar sits" and "Samar plays [music]," although neither is written correctly for those meanings, and there are other possibilities.

These sentences remind me vaguely of a Yiddish version of "Simon says" in which sentences take the form "-- למך" (="Lemekh (the subject) [does something])"; you insert the first-person-singular, present-tense verb of your choice in the sentence in order to issue commands to the group. However, there's probably little chance that the artist had this in mind.

"באא" -- bottom center -- Occom's razor suggests it is "baa," but could also be a contraction/abbreviation of b'Avraham Avinu or (more likely?) "באלף אלף".

Not the answer you're looking for? Browse other questions tagged history hebrew yiddish pictures .

5
Jewish equivalent of Occam's razor
3
What coin is this?

4
Hillel ben Shahar on gravestone
5
Etymology of מחילה
5
How does a Braille siddur work?
13
Did Rembrandt really get the 'mene, mene' inscription in his painting of Belshazzar's Feast wrong?
7
What is the correct translation of הֵילֵ֣ל?
6
Which foreign names did Jews associate with Hebrew names, and why?
6
"Famous" Jewish painting "The Talmud" pedigree