Why did nobody succeed the Lubavitcher Rebbe?

The late Lubavitcher Rebbe Menachem Mendel Schneerson zt"l had no successor as the rebbe of Chabad-Lubavitch. Why is this? Was it simply because he had no children? If so, why was nobody else appointed to be the rebbe?

There are, perhaps, several factors to consider:

(I suspect this will get some downvotes or be seen as disrespectful by some. It's important to say nonetheless.)

It appears that as Rabbi Schneurson had no children there was no heir-apparent; in his last years after he suffered a stroke he was probably unable himself to choose a successor, and prior to that -- well I don't know what plans were made. Rumor has it that some believed it had been decreed long ago that there would only be seven grand rabbis of Lubavitch, and hopes were high that the Messiah would come at that point. But critics will tell you that succession planning could have been done a lot better -- it's actually a lesson for all of us to think about our wills and life insurance, unpleasant as it may be.

Rabbi Menachem Mendel Schneurson zt'l was an incredibly great man in all sorts of ways, and he left some very large shoes to fill. (Critics would tell you that exaggerated language about his greatness only makes the transition after his death even more difficult.) Not to mention there is a division within Lubavitch regarding how to view Rabbi Schneurson's messianic potential after his death, this makes choosing a new rebbe harder still.

(Some have floated the name of Rabbi Adin Steinzaltz shlit'a as a possible eighth Lubavitcher Rebbe; besides the above difficulties, Rabbi Steinzaltz's background is seen as somewhat of an outsider's [his parents were not religiously affiliated], and his role as a quiet intellectual (of colossal stature, may I add) would be a great departure from his predecessor's public figure.)

The Talmud gives thanks that human corpses rot; Rashi explains that this forces us to bury them. Otherwise we'd leave the remains of our loved ones around all the time, and never cope with their loss. We take the memories of the dead with us, but then we move on. Candid friends of Chabad-Lubavitch wonder if they would have done better had they planned for a post-Schneurson existence.

The Lubavitcher Rebbe perhaps did not have anyone one person to proceed him on purpose perhaps becasue he has more then 5000 Shluchim emissarys worldwide who have proceeded him and followed his mandate of 'Uforatzto, Yomo Vokedmo, Vetzofono Vonegbo', bringing a thirst of yiddishkiet to all corners of the world. What other leader do you know of charged so many of his chassidm with leadership ones who are committed there for a lifetime till the coming of Moshiach.

From the outset, the Rebbe was to be the seventh and final Lubavitcher Rebbe. It is an important part of Chabad theology. See here:

However, by Rabbi Yosef Yitzchak Schneersohn's reign there had been seven generations of Hasidic Rebbes who had followed the Ba'al Shem Tov, and six generations of Lubavitcher Rebbes. As early as 1926, Yosef Yitzchak emphasized the importance of a midrashic statement that "all sevens are dear to God." In the 1940s, after experiencing the depredations of Communist rule and seeing some of his family and much of his world destroyed by the Nazis, he coined the slogan le-alter le-teshuvah, le-alter le-geulah ("repentance now, redemption now").

Rabbi Yosef Yitzchak's last work was entitled Basi Legani, or "I have come into my garden," after the biblical verse, "I have come into my garden, my sister, my bride" (Song of Songs 5:1), understood as a poetic allegory of the consummation of the love between God and Israel, and also that between God and his exiled (feminine) presence, the Shekhina. It was delivered posthumously by Schneerson on the anniversary of his father-in-law's passing, in what was to become his first address as Rebbe. Schneerson consoled his father-in-law's Hasidim and himself by emphasizing that "the seventh is cherished." Just as Moses and his generation had followed Abraham by seven generations, so too this generation was now the seventh Hasidic generation, whose task was to complete the process of drawing down the Shekhina. The end of the address is worth quoting at some length.

I accidentally came across this site and wish to give a different perspective. First it's important to realise that the Rebbe was a unique person and that his legacy lives on in those who follow him and that no one could fill his shoes.

Sadly though there are those who were capable of guiding the Rebbe's Chassidim just as Breslov Chassidim have, for Breslover's there only was one Rebbe, Rav Nachman but they have Rabbonim who guide them and crucially they are involved with other Chassidus and the wider Orthodox Jewish world.

Unfortunately what happened in Chabad is that a sizable number believed and some even declared the Rebbe the Moshiach, the Messiah, this is not the place to go into detail but there are explicit sources to prove that the Moshiach has to be conceived and be born in the Holy Land as well as uniting the Jewish people and when explicitly asked the Rebbe responded that he was not the Moshiach and that he had tried everything that he could do to bring the Moshiach, a direction that many of his contemporary Rebbes and Roshei Yeshivot considered incorrect.

This 'Moshiach' group of people have made it almost impossible for Lubavitch to integrate in the way that Breslov Chassidim have done and their beliefs which have no source or foundation to them can even place them in a Jewish Law in a category of people who are actually non-observant even though they keep the entire rest of the Torah a bit like Jews for Jesus. Imagine a Jew who observes all the mitzvoth but belives that Jesus is the Messiah - this person has placed themselves outside the Orthodox camp and has strange alien beliefs.

In truth Chabad do not need another Rebbe but what they do need is for those who do not believe the Rebbe to be the Moshiach to split from those who do belive this but this could be very acrimonious and so the status quo has been accepted even though it has isolated Lubavitcher's from the rest of the Orthodox world. A tragic story given that they do much good and help many people but true non the less.

Because that would make the meshichist angry, because the meshichist, who, mind you, control 770 and believe that the last rebbe is moshiach and that nobody will proceed him. They aren't gonna accept anybody else. And plus, the non meshichist just say that since he could be moshiach, they will not choose another rebbe. The non meshichists are fine with or without a new rebbe anyways.

In short, it's because some still believe the last rebbe is moshiach.

In addition to many things that have been said here, there is a tradition amongst older chassidim in Russia that that there will be 7 rebbes and no rebbe before moshiach comes. I heard this directly from Eliyahu Touger(his name is all over chabad edition translations into english) who said it was a "known thing". I then promptly asked Uri Kaploun (also a known chabad editor) who said that a vintage Chosid R' Mottel Kozliner(he knew him personally) said this at a fabrengen in Nachlas Har Chabad years ago. In a sefer from R' Sholom Dovber Volpo, he brings that this ultimately came from the Rebbe Rashab himself. 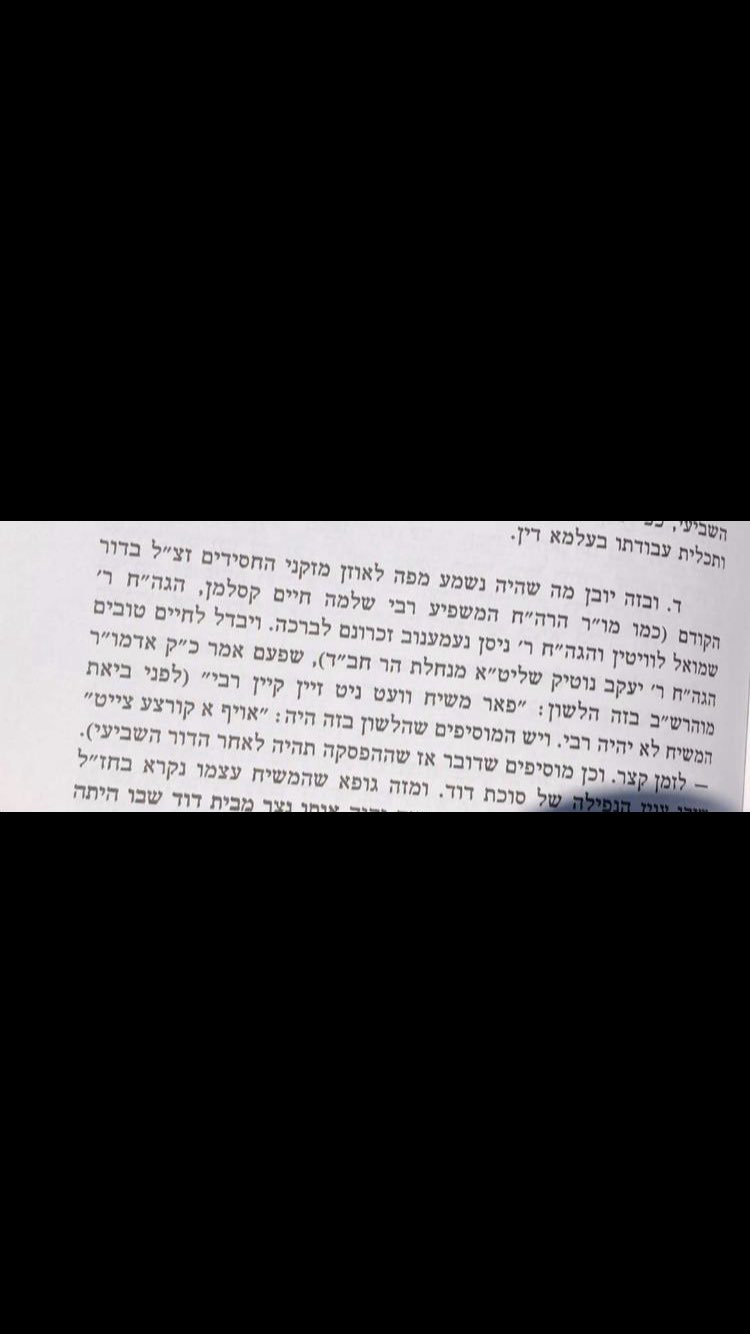 You are all wrong. Rabbi Shaul Shimon Deutsch is the 8th Rebbe.

The Rebbe: The Life and Afterlife of Menachem Mendel Schneerson By Samuel Heilman, Menachem Friedman

Not the answer you're looking for? Browse other questions tagged history rabbis chabad chassidic-rebbe .

10
Refusing to Daven from the Amud
13
Why didn't Joshua appoint a leader after him?
2
closest successor of the Lubavitch Rebbi today