Is there a Moses Seat in Synagogue?

Is there a Moses seat in Synagogue? I know about the Chair of Elijah but I came to know there is also Moses Seat. Please confirm.

There used to be such a thing in ancient synagogues. This special chair was referred to in Pesikta D'Rav Kahana 1:7:

As noted by Cecil Roth in his essay "The "Chair of Moses" and its survivals", Palestine Exploration Quarterly, 1949 (emphasis mine):

"It was indeed pointed out some time ago that R. Aha...explained the Biblical description of Solomon's throne by saying that it was "like the cathedra of Moses"...which would suggest that some specific object was in his mind..."

L'havdil, it was also mentioned in the NT:

"The scribes and Pharisees sit in Moses’ seat."

Archeologists believe that they have found some of these chairs.

"Recently, however, in the course of excavations of the Palestinian synagogues of the first centuries of the Christian era, there have been found some stone chairs of a distinctive nature which have been unhesitatingly identified with the actual "Chair of Moses": it is believed that they were reserved for the most distinguished of the elders of "Rulers of the Synagogue", who we know sat apart "with their faces to the congregation and their backs towards the Sanctuary" (Tosefta Megillah 3:21). The first cathedra of this type, 94 centimetres in height, was unearthed against the south wall of the synagogue of El Hammeh (the Baths of Tiberias) at the side of the Ark...and is carved out of a single block of white limestone: 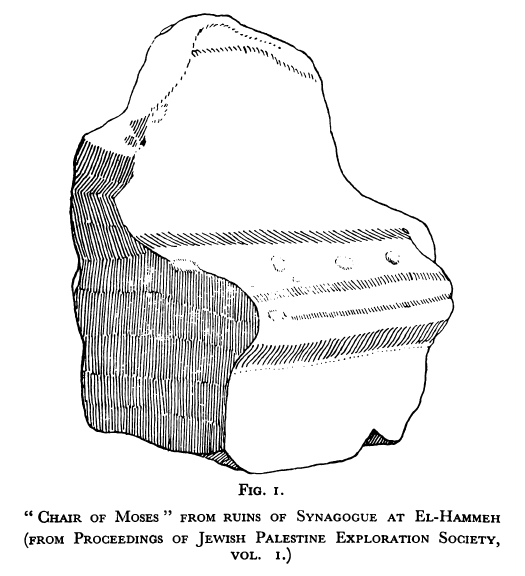 the second was found at Chorazin (Kerazeh), and like the rest of the building is of basalt." 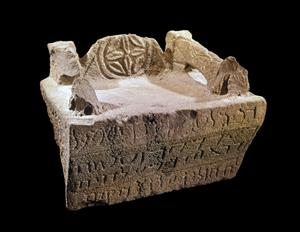 Roth himself continues on and explains why he believes these chairs cannot be the "Chair of Moses", and suggests that special chairs or tables - also discovered in ancient synagogues worldwide - that were used to hold Torah scrolls are the real "Chair of Moses".

Israel Renov, on the other hand, in his essay "The Seat of Moses", points out flaws in Roth's hypothesis. He then brings evidence that such chairs were in fact used by important community leaders, for example, Shir Hashirim Rabbah 1:3:

Translation: "...And the study hall of Rabbi Eliezer was built like a ris, and there was one stone there, and it was set aside for him [Rabbi Eliezer] to sit upon."

This "stone", according to Renov, was Rabbi Eliezer's stone chair.

Furthermore, in the Talmud (Megillah 26b), there's mention of a kind of platform used for reading the Torah. It was called a "כורסייא". Renov argues that if Rav Acha was talking about such a thing, as Roth opined, he would surely have used the same term, and not referred to it with a completely different term "קתדרא דמשה".

For more info and other views, see here, here and here. In short, most scholars nowadays disagree with Roth and believe that these special stone seats were most likely the "Chair of Moses" mentioned in Tannaic and Amoraic-era sources.

Nowadays some synagogues have special chairs for rabbis, though generally not made of stone. Other synagogues set aside chairs for rabbis, but these chairs are the same as the rest of the congregation's. These seats are not referred to as "the Chair of Moses" or "the Seat of Moses" but simply as "the rabbi's place/chair/seat/bench".

No such chair exists.

The Hebrew term for a seat may also be used to describe a rôle (the English word “position” has a similar feature): writings referring to people occupying Moses’ seat might refer to those who teach as Moses did.

Not the answer you're looking for? Browse other questions tagged synagogue moshe-rabbeinu standing-sitting .

3
What are the Hebrew titles for synagogue functionaries in various communities?
6
Please explain the idea of the Chair of Elijah in synagogue
2
Obligation to give seat to an elder?
9
Is a person allowed to sit in someone's reserved shul seat before that person appears?
12
Joining a synagogue after two generations non-practising
6
How many rabbis does a synagogue have and what is their role?
5
Source for the tradition of buying seats in synagogues