Why do some Jews (Sephardic, Hasidic, et al.) place the kiddush cup into the hands of another?

One then commences the physical preparations for qiddush. It should be noted that there are profound kabbalistic kawwanoth in each of these actions, so one should not omit any of them. One should recieve the cup of wine with both hands form someone else, the latter holding it in both hands when he passes it over and hold it in both hands level with one's chest for an instant, then let go with the left hand, holding the cup only with the right hand.
While holding the cup in one's right hand, a little water should be addd to the wine. It is preferable that the same person who handed over the cup also adds the water, hold the container of water in his right hand. the water should be allowed to flow into the cup in three gushes; it should not all be poured at once...

According to the Sha'ar HaKavvanot 71a and the Siddur HaRaShaSh the cup is actually supposed to be held upon the tips of the five fingers of the right hand(the is actually derived from the Zohar Hakdma daf 2a). So the cup is briefly actully passed to the left hand.

So the simple reason is because the Ari and the Ben Ish Hai says so. The longer reason is that it is representative of drawing down kedusha from the upper worlds in ours. As elaborated in much more detail in the sources cited.

I don't know about all the above Kabbalah discussions, but the Tur and Shulchan Aruch in OC 183 say:

Sounds to me like someone is passing it off.

The Taz (OC 183 sk 2) says that the acceptance with two hands is to show how excited one is to receive it, as if he was reaching out and grabbing for it.

My understanding -- don't recall where I heard this -- is that the Kabbalistic preference is to hold the (preferably flat-bottomed) kiddush cup in a cupped, palm-facing-the-ceiling hand. (And if your hand is in this position, it's much easier if someone else places the cup into it.) That hand shape indicates you're a recepticle, prepared to receive "shefa" -- an outpouring of Heavenly influence and blessing -- from Above.

For more on the notion of "shefa" in a not-particularly-Kabbalistic source, try Malbim's commentary to II Kings Chapter 4 (where they keep pouring and pouring and pouring the oil). His comments there are permeated (not punctuated) with treatment of the concept.

This is far out of left field, but I wonder what type of cup was used in the times of the Mishnah, Gemara, Geonim, or early Rishonim. The reason I wonder is that a couple of years ago a British gentleman found a very interesting cup dating to ancient Persia. If you notice, the cup was ornately molded (or sculpted, but I doubt that) with the face of what is believed to be an ancient Persian Roman god. See below: 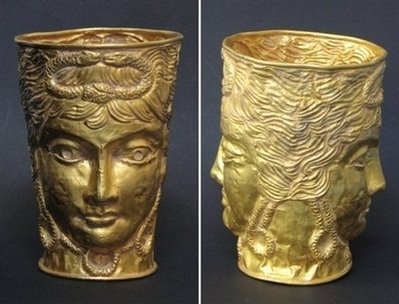 Now, I'm speculating here, but it would not shock me if it was common practice among the noble classes to have these types of cups for formal/ritual occasions. Indeed, here is another cup from the same period: 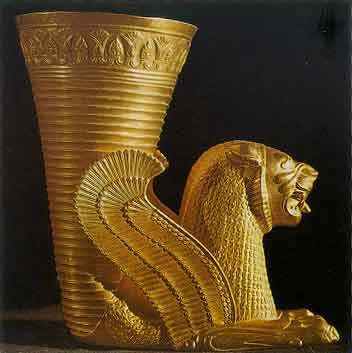 Now, I would imagine, especially given the shape of the second cup above, it was common to hold the cup from underneath so as not to cover the face of the deity on the cup - in fact, the shape of the second cup may have even been designed assuming that it would be held that way and that the molding would not interfere with holding the cup. Assuming all my above speculation is correct (or close), it might follow, then, that this was universally seen as the most "proper" way to make a toast or to declare loyalty or admiration to one's king or god, and that this method was used by Jews as well (which would explain why I have heard so many times that one's fingers should be positioned vertically so that they resemble the points of a crown at the bottom of the cup).

Again, this is just speculation, so take it for what it's worth (if anything at all).

To close the loop on my train of thought here, I was taught (by a non-Hasidic Ashkenazi rabbi/mentor) that, for Zimun over a Kos, someone should take the full cup in two hands and place it into the open and waiting palm of the person who will call the Zimun (who will then close his fingers around the base of the cup as described above).

Not the answer you're looking for? Browse other questions tagged minhag sephardi-mizrachi-eastern chasidut-hasidism kiddush .

11
Should one drink from the leader's cup after kiddush?
12
Kiddush cup: stemmed or not?
6
Drinking the wine that spills over the cup during Kiddush
2
The Chofetz Chaim's kiddush cup
4
Leaving wine bottle uncovered during kiddush
2
Is there a reason to drink most of the kiddush cup if not on paisach
0
Origin of the minhag to hold the kiddush cup in one's palm
9
Why ask guest to make kiddush?
3
Holding ones cup while someone is reciting Kiddush for you