What would be the status of the coffee maker cone shown below if it were to be used to make a cup of coffee in a dairy mug? Would it become dairy? Would it remain parve?

Here's how it works. It holds a coffee filter, into which coffee grinds are placed, and over which hot water (approximately 165-180°F) is poured, and it has a small hole at the bottom, through which the coffee-enriched water drips into the cup below.

Does it make a difference if the cup was used, and for what, within the previous 24 hours? 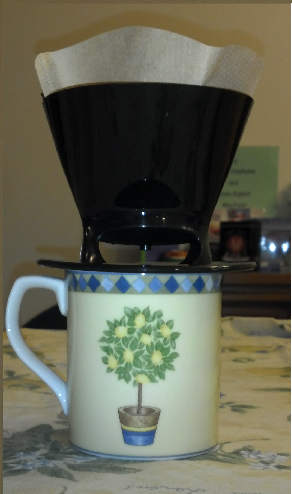 Obviously CYLOR, but at least in principle I find it hard to say that the cone would actually become milchig. In a simpler case of a pareve spoon that was inserted into a clean milchig ben yomo pot that is a Kli Rishon (that now has hot pareve inside) the halacha mi'ikar hadin is that it remains pareve though many say it is preferable to treat it as milchig (source, based on Shach YD 94:15). However, in the case in question the mug is not a Kli Rishon. Probably the status would be that the first few drops that fall in while the hot water is being poured from the kettle is considered Irui Kli Rishon Benifsak Hakiluach, and the remaining water falling from the cone would be Irui Kli Sheini. Even Irui Kli Rishon Bnifsak Kiluach is not able to be Maflik Umavlia Ke'echad; that is to remove the milk absorbed in the mug and to cause it to be absorbed in the cone (explained here).

Not the answer you're looking for? Browse other questions tagged halacha kashrut-kosher cooking-bishul dairy .

5
Will a “lower” Berachah made MiSafek exempt a different food that requires that Berachah (and vice versa)?
2
Using water filter/purification system on Shabbos
4
How to say mizonos first on an ice cream cone
5
Turn dairy ceramic pot into parve pot
1
Does flavored drip/ground coffee require a hechsher?
2
Kiddush before coffee?
3
coffee “Elite” from Israel
0
Is the use of the term “Glatt Kosher” a case of “Genivat Da'at”?
5
Explain why the “kli sheini” rule works regarding Shabbat cooking